The following 101, on bartering, comes from HOMEGROWN member Nat of OC Metro Farm, a 3,000-square-foot microcosm of veggies, fruit, quail, rabbits, chickens, and tilapia in Southern California. Nat was kind enough to share these tips on how to start a conversation about bartering with your friends, neighbors, and total strangers. Thanks so much, Nat, and please keep gleaning more good ideas. We’ll trade you for them! The result? Me, pointing at a jar: “Is that cow milk?"

As the two of us examine the dairy largesse, Ken says: "That's a lot of milk. I'm going to take some to Heather and Peter." He returned with apples. We may not have unclogged freeways or reasonable costs of living, but one of the many benefits of living in Southern California is the series of growing seasons that span the entire year. There is always something in season here. Always.

Our first fruit score was a huge bag of grapefruit dropped on our porch by a neighbor who walked his dog, Lulu Mae, by our house daily. He liked to stop to talk. One day he heard our chickens. He was surprised that chickens were allowed and even more surprised to learn that even more chickens lived two houses down. His brother has a chicken farm in the Inland Empire, and the eggs were the best, he told us. But he did not see his brother often and so did not often partake of the excellent eggs.

We gave him some of ours. The bag of grapefruit materialized a few days later. The other chicken owners gave us mulberries. We had extra peppers and beans. Lonny down the street has a huge avocado tree. He gets his relatives to pick them and then gives us bags of avocados. We take him dinner every now and again. Recycling Gilbert down the street drops guavas on our porch, and we give him our cans. I do not think we've ever exchanged more than hellos.

One of our most successful swaps was the Quail for Bacon Program. We stopped at the farmers market near our surf break for bacon. We love bacon but do not love what most of the pork industry does to its pigs. We'll occasionally get bacon from Da-Le Ranch. As we tend to do with most folks, we were chatting about this and that, when Dave, the proprietor, made a comment about butchering chicken. He suddenly seemed nervous, as if he'd said something we would not want to hear. I responded with a remark about butchering quail.

"You have quail?" he asked. I nodded. "Do you ever have extra chicks? I have had the worst luck incubating quail." Dave, as it turned out, really wanted to sell quail eggs. So, for most of the summer, when our quail were laying well, we traded quail chicks for bacon and other meat cuts we did not raise ourselves. 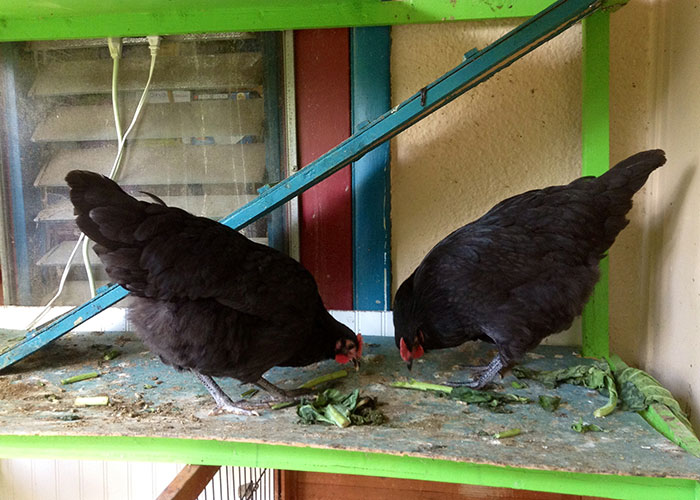 BARTERING TIPS (AKA HOW TO BROACH THE SUBJECT OF SWAPPING)

1. Most of our success with swaps and bartering comes directly from talking to folks. These folks include our neighbors with trees full of fruit, vendors at farmers markets, and random shop owners. I honestly cannot say how we get onto the topic of swapping, but Ken and I will talk to pretty much anyone who is trapped behind a counter or fruit stand.

A few weeks ago, I was chatting with the owner of a deli-pub near our house, where I buy hard cider. He gardens. I garden. We have a mutual love of the farm pirates at OC Farm Supply, so there is much to discuss. I mentioned we'd made rabbit sausage. He was interested. "If you bring a couple in, I'll swap you for something here." I'm just saying: pickled eggs, people!

2. Never underestimate social media. A friend of mine has a Facebook page dedicated to her little homestead. People trade on that page frequently. Lemons for turnips. Carrots for avocados. Heck, post on your personal page that you have a gazillion peaches and see if anyone has anything to trade. When we have way too much produce, we will often unload it on Facebook.

3. Is there a small mom-and-pop store you frequent? Take them something you have extra of. Our favorite donut shop is at our surf break. One day we found ourselves with a box of veggies and quail eggs for a fellow surfer who didn’t show. Not wanting the stuff to go to waste in the car while we surfed, we handed off the box to the folks at the donut shop. Do you think we paid for donuts that day? As if. They also tried to give us donuts the day we serenaded them with tubas, but that might have been to make us go away.

4. Do not chase people away from your recycling can. There is cash to be had from those cans and bottles—or, sometimes, guavas and blueberries. After a year or so of not chasing Recycling Gilbert away from our can and telling Kazumi to stop barking at him, gifts of produce began appearing on our porch. We finally traced our mystery produce to Gilbert and his various fruit trees. Evidently, he gives plants and flowers to other people in the neighborhood. I guess he figures we have enough of those. 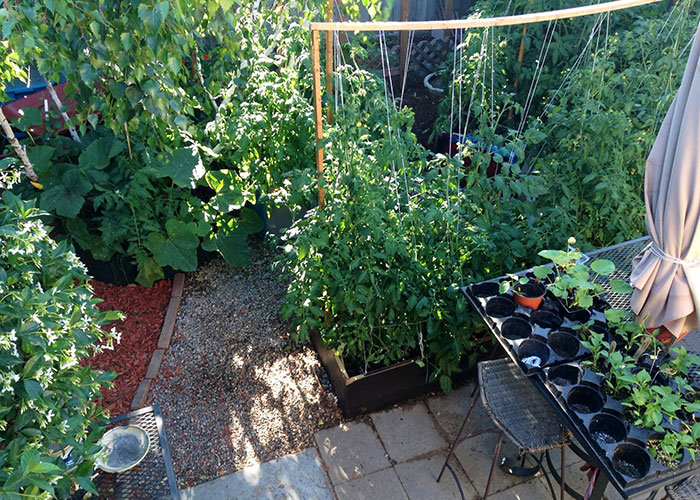 The backyard at OC Metro Farm

5. Don't assume others want cash in exchange for goods. Dave, of the Quail for Bacon Program, initially asked us how much each quail chick would cost. I suggested we trade instead. He was delighted.

6. I should also mention that many a time we have given away veggies, eggs, and other food items without expecting anything back. You may give away a box of eggs or a bunch of zucchini and never see anything in return, save for a smile from the recipient. Or one day you may find a bag of grapefruit on your front porch. 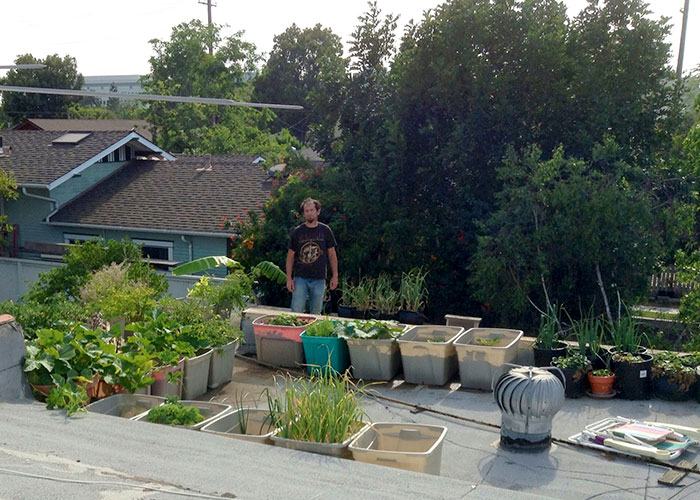 7. After posting about bartering on our blog, one reader suggested checking into formal food swaps. An excellent idea, I'd say. You can find a Hosting a Food Swap 101 here on HOMEGROWN, courtesy of the Food Swap Network cofounder Kate Payne.

8. Did I mention the value of talking to people? That neighbor four houses down with the massive fruit tree may not view said tree as the wonderful fruit-producing asset that you do. He may have moved into the house and appreciate the shade, but he may hate the birds, possums, and raccoons the fruit attracts. That fruit might be falling from the branches and rotting on the ground, the bane of his existence. Perhaps he'd be delighted if someone came over and did the work of collecting that fruit and getting it out of his yard. You never know.

Got a question for Nat or another suggestion for how to approach swap talk? Post it below and keep the conversation going! You might also be interested in 101s on hosting a food swap, starting a CSA (even if you don’t have a farm), launching a food recovery program, building community, and constructing a posting post. You can find all kinds of things to cook, preserve, plant, grow, make, craft, and barter, in the HOMEGROWN 101 library.

My Dad use to barter his floor covering services for food when I was a kid. I am a Public Accountant/Bookkeeper with my own business. I have slowed down to only needing to work about 20 hours a week. I was a loyal Whole Foods Shopper for more than 20 years. Having time now, I am going to start visiting all the farms and farmers markets that are local to me here in the country. I am going to leave Whole Foods and find a way to buy only local (I eat 90% raw my husband is a meat eater). I would very much love to trade my accounting/bookkeeping services for food like my Dad use to do. I am very concerned with the quality of my food and the way farmers treat their livestock and land and always have been. I am going to take this advice and start getting to know more of my farm neighbors. I appreciate this 101 very much it was perfect timing since I am ready to trade my time and bookkeeping knowledge with farmers that may not have time or knowledge or love for doing their bookkeeping for their beautiful veggies and well raised livestock.  I am very excited about getting back to my farm raised roots and being with the land and animal lovers. I am pulling on positive energy that one of them will appreciate my 30 plus years of experience in Accounting and benefit from not charging them to share it:) Thank you Homegrown for my first positive attraction to this recent idea to barter my expertise with my neighbor's here in the country!

Hi, Mary Lou. Jennifer here, the HOMEGROWN flock tender. Your comment made my day! I'm so glad this 101 is of use to you, and I'm so glad you're looking to buy local and to barter with your neighbors. Thanks for the much appreciated feedback—and good luck in your bartering adventures. Please keep us posted on how it goes!

I am happy you are having a great day! I will definitely keep you posted. Tomorrow I am going around to all the local Markets. I am going to meet with a CPA this Friday about Farm Accounting so I understand it to it's fullest before I open my mouth. So, I am on my way to being a better neighbor in the farm world:) Thanks for your reply it means a lot!

Can't help but love that you're wanting to use your talents and support farmers at the same time! Let us know if you learn anything that might be useful/applicable for other folk. Good luck!