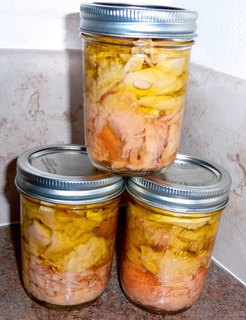 This 101 comes from HOMEGROWN member Janet, who, after buying an acre of land in Washington State, is learning to master the art of preserving. Since Janet is new to packing and pressure canning tuna, we promised to solicit advice from fellow HOMEGROWN types. Sue, another Pacific Northwester and a certified Master Preserver—
sort of like a Master Gardener, except cannier—weighs in below, but we hope you’ll share what you know, too. Thanks, everyone, and please keep the good ideas coming!

We are fortunate to live near a source for fresh fish, and this year we decided to do more than freeze tuna steaks for the grill. Tuna season in Westport, Washington, goes from late June or early July into September. We bought our tuna off one of the boats in the port; there are several that sell their catch directly from the docks. We purchased two albacore for a total of about 25 pounds of fillets.

The first step was purchasing a pressure canner. Because I have a ceramic-top stove, I did a little research and followed recommendations for the one brand that can be used on my type of stove: the Presto Pressure Canner & Cooker, model 01781.

I love it but I do wonder if I could have bought one with smaller capacity. Canning for two people, I don't often use quart jars. My mother used a pressure cooker to cook many meals—this was in pre-slow-cooker times—and I did the same when my children were young. The only other caveat with this canner is to make
sure you don’t move it without lifting it completely. Fully loaded, it’s heavy! I put a small scratch in my stove. If you can’t easily lift your canner by yourself, be sure to have an extra pair of hands around. Bribing a friend with a jar of tuna should do the trick.

My original question to HOMEGROWN members was whether or not to cook the tuna before canning it. After reading responses, I learned that it can be done both ways, so I did it both ways, once with each batch. (If you go the uncooked route, Sue, another HOMEGROWN member, recommends using partially thawed frozen fish. A little firmer than raw fish, it's easier to handle and cut, she says.) 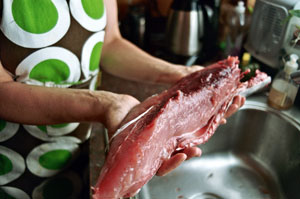 I used the manual from my pressure canner, as well as recommendations from the Ball Complete Book of Home Preserving—namely, that tuna would require 100 minutes of processing time. But for step-by-step directions, I relied primarily on a recipe, downloadable below, from the website Coco Cooks.

(Sue recommends directions provided by the Oregon State University extension office, which include current safety guidelines for canning seafood. “We actually had a case of botulism in eastern Oregon this summer, where a family ate something that was home canned,” Sue writes. “Although people rarely die from botulism anymore, it is a neurotoxin. I like that Janet used her pressure canner manual and the Ball book, both trusted sources.” We also love the video below, from HOMEGROWN’s pal Harriet.)

In the video below, Harriet Fasenfest, author of The Householder’s Guide to the Universe, and Marge Braker, a former Oregon Extension home economist, demonstrate how to safely can fresh sardines. While there are differences in working with sardines and with tuna, this video provides a good intro to canning seafood—and a great basic primer on pressure canning.

My first batch was uncooked, covered with water. The tuna was quite fatty, and the finished product was not particularly pretty, although the look did not affect the taste.

In the second batch, I cooked the tuna before canning it. I started out 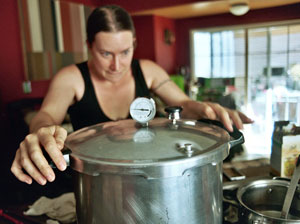 using olive oil, but it quickly became clear that olive oil could get expensive, so I diluted the oil with water. This batch came out looking much better. After trying samples of the cooked and the uncooked versions, we prefer the cooked, as it cooks off some of the fat from the fish. It also has less of a fish-oil taste, and we like that mildness.

We use the tuna in many ways. We regularly eat tuna sandwiches and tuna melts. My husband loves casseroles, and I have used the tuna that way, too. But I also like it straight from the jar, in my salad or in stuffed tomatoes. We don’t waste a bite; even the carcass and scraps become cat food and crab bait. 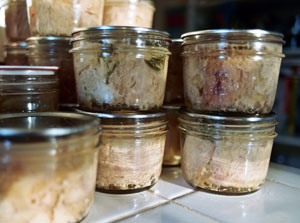 Buying and canning tuna fresh off the boat is not a big savings, but I know where it came from, and unless I go out and catch it myself, it can’t get any fresher. Bottom line: I can't go back to store-bought tuna so easily after this.

In our original discussion on HOMEGROWN, Sue had recommended that, if we could can the tuna outdoors rather than in the kitchen, it would be much better. I can see why. My only outdoor option this time around was a camp stove or a turkey fryer, and I took to heart warnings about the safety of using either one with a pressure canner. (Stoves that run higher than 12,000 BTUs, such as turkey fryers, can warp the bottom of your canner, Sue says.)

After trying to get rid of the fish odor for days, I thought I would never can tuna again. But after tasting the finished product, we’re already talking about how to make it better next year. We’re planning to build an outdoor worktable in the spring, so I might find a way to do more prep work out of the kitchen.

And next time we will precook all of the tuna, but we’ll experiment with adding more herbs and flavors. Someone even suggested putting a slice of jalapeno in each jar. I am happily collecting tips and recipes from more experienced canners; please share your comments below!

Got a tuna bone to pick? Or a canning question for Janet and the rest of the HOMEGROWN flock? Post it below and keep the conversation rolling. If you’re new to canning, you might be interested in the Canning Basics 101 and the Small-Batch Canning 101; slightly more advanced types might take a gander at the Canning Chicken Stock 101. You can always find more things to cook, preserve, make, craft, plant, grow, and simmer in the HOMEGROWN 101 library.

Farm Aid 2021 to Air on Circle Network, SiriusXM and FarmAid.org