This 101 was contributed by HOMEGROWN Life columnist Rachel of Dog Island Farm, who is especially adept at plucking HOMEGROWN ideas, like yeast, out of thin air. Thanks, Rachel! Please keep the genius coming!

San Francisco is famous for its sourdough bread, which practically grows on trees around here. Fortunately, we can all catch our own wild sourdough starter, also known by its French name, levain. Levain has been used for centuries to make bread and, due to its low glycemic index, might even be healthier for you than breads made with commercial yeast. Levain helps breaks down phytic acid in grain, which blocks the absorption of minerals and vitamins, and it’s promising for folks who are gluten intolerant, since it helps degrade and deactivate problematic proteins.

Nowadays you can purchase commercial sourdough starter, but what fun is that? Catching wild levain is super easy to do and doesn’t take much effort, but you don’t have to tell others that. Go ahead and let them think you worked for it. HOW TO CATCH WILD LEVAIN

Are you ready to get blown away? To catch a levain, all you need is some flour and an equal amount of water in a wide mouth container or bowl. Yep, that’s pretty much it. Just mix the flour and water together and set it outside for a couple of days. Then bring it in and keep it in a relatively warm spot. In a few days, bubbles will start to form on the surface.

Once that happens, go ahead and store your levain in the fridge. From there, the only thing you do need to do is feed it equal parts of flour and water every three or four days. It should have a slightly sour smell to it, which is a good thing. You can keep your levain going for as long as you’re willing to take care of it or until something goes wrong (like it gets moldy).

WHAT TO DO WITH YOUR CAPTIVE LEVAIN: NO-KNEED SOURDOUGH BREAD RECIPE

So, how do you use your levain? I like to make a nice no-knead artisan bread with it. The following recipe makes two loaves or one gigantic loaf, if you’re up for it. (For a large loaf, you'll need to increase the baking times.)

In a large bowl, mix together the water (at about 110 degrees F), the salt, and the levain. Add the flour and mix. Your dough should be wet but not sloppy. You want level cups when measuring, so use the flat back edge of a knife to scrape off any excess flour.

Cover and allow this mixture to sit for at least two hours in a warm, dark spot. Don’t worry if your dough looks low: This recipe doesn’t rise like breads made with commercial yeast. After two hours you can put it in the fridge to store or make a loaf right away. Since the dough is pretty wet, it’s much easier to handle when cold, so I usually put it in the fridge for about 2 hours before I plan to bake it.

When I’m ready, I pull out half the dough and, working quickly, I shape 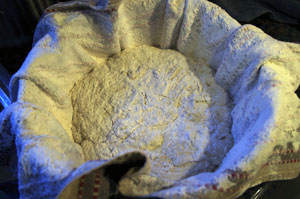 it into a ball by pulling the top down over the sides and stretching it. I place this ball in a bowl lined with a heavily floured non-terry-cloth towel. Sprinkle a bit of flour on top and cover with the edges of the towel. Allow your dough ball to rest and rise for another hour.

Forty minutes into the rise, place a Dutch oven (cast iron works best, but you can use any type with a lid) into your oven and preheat to 450. The purpose of the Dutch oven is to steam the bread for the first part of the baking. This helps develop a moist crumb while allowing for that really crunchy crust. The heavier the lid, the more steaming action you’re going to get, which will help develop larger holes in the crumb.

Bake with the lid on for 30 minutes, then remove the lid and bake for 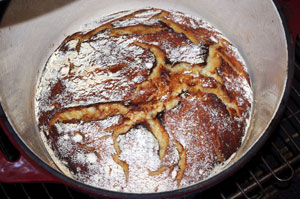 an additional 30 minutes or until the crust is completely browned. Be careful not to overcook, as the bottom of your bread can and will burn if left too long.

Remove the bread from the Dutch oven and place on a cooling rack. Allow to cool until you can safely handle it, then serve. You have now mastered the art of no-knead artisanal sourdough bread!

A note about ovens and not getting the perfect loaf: Every time I used this recipe, my bread came out well but not quite as good as I knew it could. I always thought I was doing something wrong. When we got our Wedgewood, I quickly realized that not all ovens are created equal. Our previous cheapo oven just couldn’t do the job and left me feeling inadequate. So, if you have a hard time making that perfect loaf, it may not be your fault but rather that of the oven you’re using. (Take that, oven.) If you have a friend with a superlative oven, you might ask to bake your bread there, leaving one loaf behind as a thanks.

Revisit the HOMEGROWN blog for more from Rachel on baking, cooking, and raising kids and animals on her quarter-acre urban farm in the San Francisco Bay Area. Got a sourdough tip to share? Post it below and keep the conversation rolling. You might also take a gander at 101s on Bread Making, Butter Making, and Homemade Tortillas, and you can always find more things to plant, grow, cook, preserve, make, craft, and catch in the HOMEGROWN 101 library.