The following 101, on common garden pests, comes from Farm Aid’s farmer resource specialist, Jessie Deelo, who has ten years of farming experience getting up close and personal with aphids. Thanks so much for passing along your know-how, Jessie, and please keep the good ideas blooming!

Argh. Grrr. What’s eating my ________?! Sound familiar? Summer brings on many things we can appreciate: longer days, warmer weather, blooming lilacs. And then there are the mosquitos. And the flea beetles. And the powdery mildew.

Pests happen. Unless you live west of the Rockies, Japanese beetles will migrate through your neighborhood, eating everything from roses to eggplant. Cucumber beetles, a personal favorite (and by favorite, I mean nemesis), hang out in the brush along the edges of the field, emerging just as squash blossoms dot the rows. And don’t the flea beetles always show up right when the arugula is looking perfect, hours away from the first harvest?

Technically, “pest” refers to insects, diseases, and fungi that prey on plants. This 101 focuses on that first one, but it’s not uncommon for pests to come as a package deal. (Want a broader overview? Don't miss the Natural Pest Control 101.) For example, cucumber beetles vector, or carry, the disease bacterial wilt. So while it might not be cucumber beetles that bring down your melon patch, if you could prevent or mitigate the damage from the beetles, you might be able to avoid the onset of bacterial wilt. Yep, it's all connected. 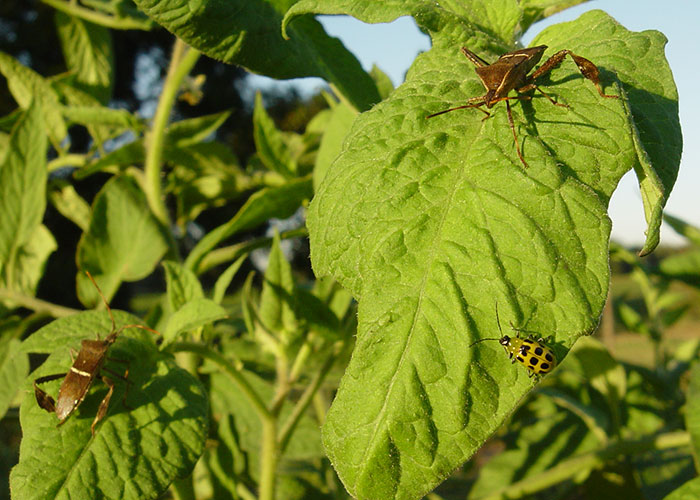 We’ll get to the bugs in a bit, but first, three key pointers for avoiding insects from the get-go.

1. BUILD HEALTHY SOIL. The first line of defense is to create the healthiest ecosystem possible, starting from the ground up. Healthy soil promotes the development of resilient and strong plants. When a plant is stressed from a lack of water or nutrients, or as a result of a pest infestation, the plant releases pheromones that signal to insects, fungus, and diseases that it is weak and vulnerable. For more on grooming your own black gold, check out the Soil Testing and Composting 101s.

2. MIX IT UP. Diversity is another important preventative measure. In addition to growing a wide array of fruits and vegetables, you might consider ways you can change up other factors, such as choosing an early planting date (with help from cold frames) or a late one (even fall or winter) and using transplants instead of seeding directly in the ground. Look for plant varieties that offer resistance or tolerance to disease and fungus. You can find this info in your seed catalog.

3. COMPANION PLANT. Another smart strategy? Interplanting veggies and flowers that benefit each other by attracting beneficial insects (parasitic wasps, nematodes, ladybugs) and/or repelling the bad ones. Some examples include planting carrots next to tomatoes or alyssum with lettuce. Read more about the practice and find printable charts of friendly plants in the Companion Planting 101.

When the inevitable strikes, take note of the damage. This can be holes in leaves, soft spots on fruit, wilted plants, or an area of stunted growth. Is the issue contained to one type of vegetable? Is there a hotspot of blemish or is it widespread? Look under leaves, along stems, in the flowers, and at the base of the plant. You might also gently shake the plant and watch for flying or hopping insects. If you suspect a fungus or mildew has struck, stay out of the area until you have diagnosed the problem. How do you do that? Read on.

In this section: identifying garden adversaries and what to do them with once you've pegged them—the little buggers. 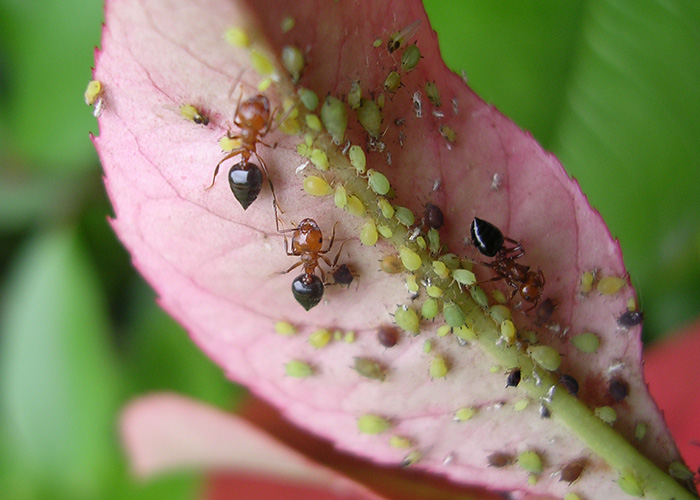 Signs to watch for: Aphids feed on plant sap, leading to deformed and crinkled leaves. In very high populations, they can kill small plants and reduce the vigor of established plants—not to mention that they can be difficult to clean from harvested leaves.

Appearance: Aphids are small, about 1/8 inch, soft bodied, and come in a range of colors, including peach, grey, green, brown, and white. They tend to cluster on the underside of leaves and along the stems.

Plants affected: Everything. OK, nearly everything. In New England, I’ve had the most trouble with aphids on kale, lettuce, beans, and spinach.

Habitat: Aphids overwinter as eggs on perennial hosts in and around the garden or field.

Solutions: Insecticidal soaps can work well as a deterrent, and ladybugs and other parasitic insects can help control aphid populations once spotted. If there is an infestation, try removing the affected leaves. 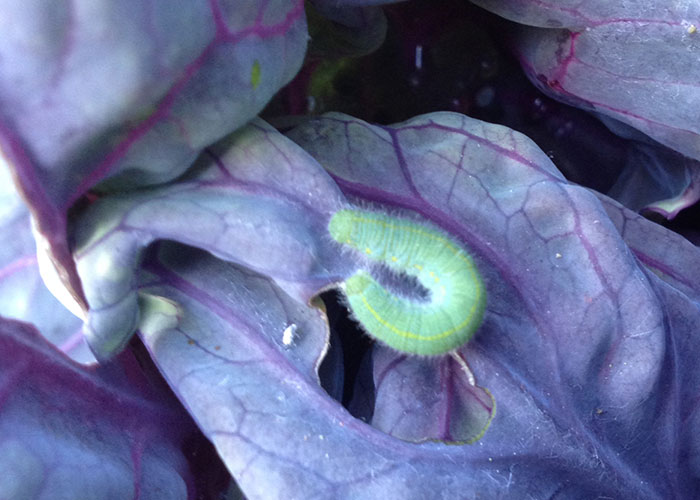 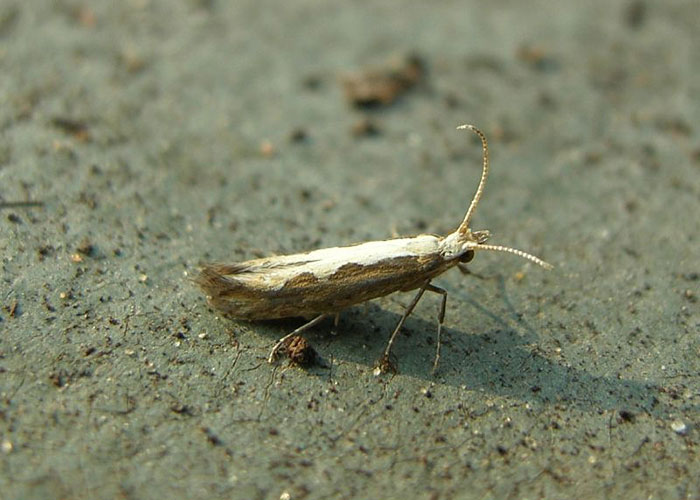 Damage: Look for large holes in leaves. These bugs live (and poop) inside the heads of broccoli and cauliflower, making for an unpleasant surprise.

Appearance: Each of the three caterpillars has a unique look but causes the same damage. The cabbage looper is light green, with white and brown stripes the length of the body.The imported cabbageworm is light green, with faint white stripes down its side body. The cabbageworm—white with two black dots—also can be identified during its moth stage, often present before and during the worms. The diamond back moth larva is similar in color but with stronger segmentation and super-faint white spots.

Habitat: The life cycle of the moths and caterpillars depends largely on geography. The moths migrate north in the spring, which means they are ever present in the south and locations where there are milder winters.

Solutions: Handpick the caterpillars and drown them in a container of water. If the plants are healthy, they can survive an infestation. Soaking the harvested heads of crops in salt water will remove most of the caterpillars before cooking. 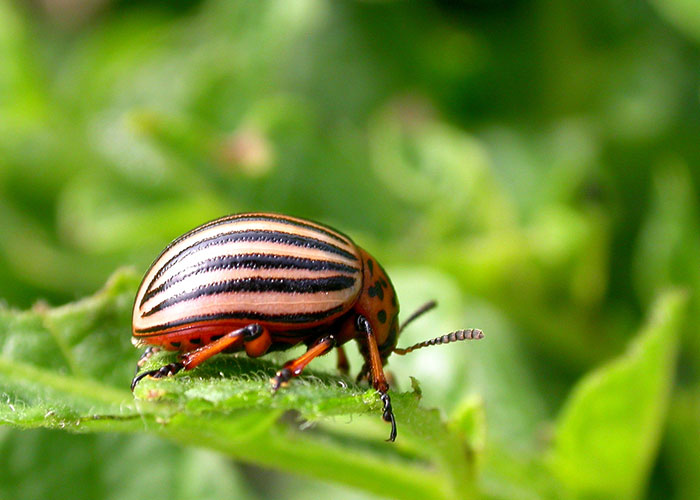 Habitat: Beetles overwinter as adults in the brush along the field or garden. They can fly up to a couple of kilometers, but crop rotation can be effective in delaying the pests’ arrival.

Solutions: Handpick the beetles and squash the larva. Gross? Maybe. Satisfying? Definitely. For the adults, swipe them into a container of water and leave them to drown. 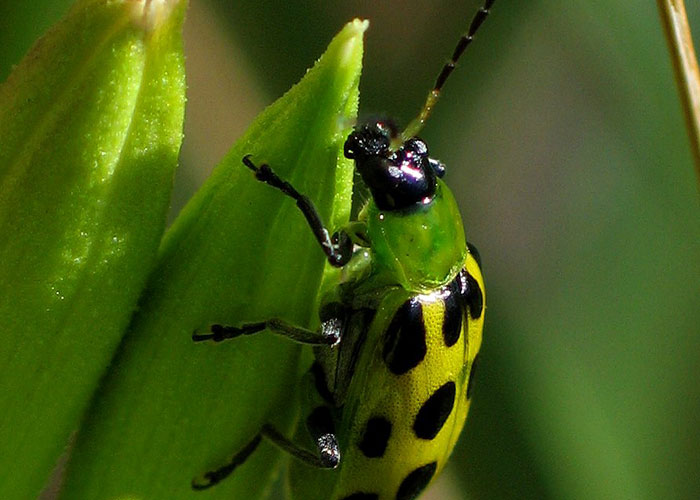 Damage: Cuke beetles are most dangerous as a vector for bacterial wilt. They also cause damage to the fruit by eating holes everywhere, including the leaves and stems, generally weakening the plant.

Appearance: Often found in the large flowers of plants in the Cucurbit family, cuke beetles are small, about ¼ inch long, yellow, and have either black spots or black stripes running the length of the body.

Habitat: Adults overwinter in weeds, debris, and wooded areas nearby. They emerge early in the season, looking for new host plants.

Solutions: Transplant early and use row covers to protect young seedlings. Best to use hoops to keep the cover from sitting on the plants, especially as they grow. Keep the row cover on until flowering then remove to allow in pollinators. If the problem becomes severe, you may need to forgo a season or two of Cucurbit crops. 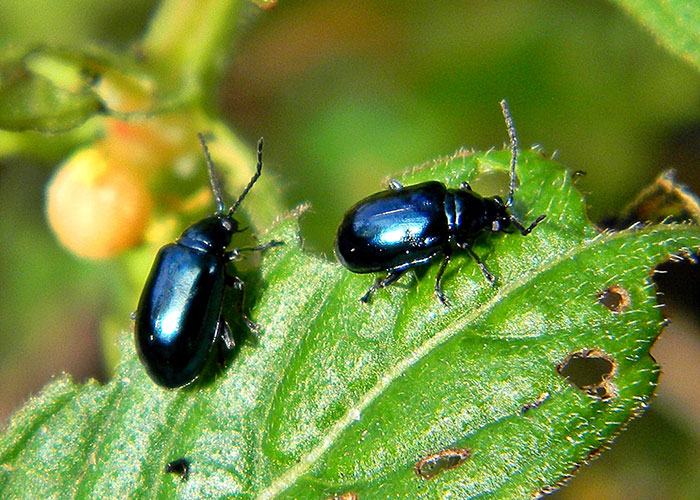 Habitat: Flea beetles overwinter as adults in leaf litter and under soil in brushy or wooded areas near the field or garden. They emerge when temps hit about 50 degrees. Adults lay eggs in the soil at the base of the plants. Larvae hatch about a week later, start eating, pupate in the soil for another 11 to 13 days, and then emerge as adults and really start eating.

Solutions: Covering rows early in the season can keep flea beetles out of an area. Once they are present in the soil, though, row covering is not effective. Early or delayed planting dates and transplanting can help avoid damage, as flea beetles' life cycle is short and they thrive in hot weather. Crop rotation and soil health is key. Damage: Large holes in leaves. Beetles can defoliate plants quickly and tend to be widespread across an area.

Appearance: At about a half an inch long, Japanese beetles are actually quite attractive, with copper-colored hard bodies and a shiny, emerald green upper body and head. If you can just see beyond the enormous holes they’ve eaten in your plants . . .

Solutions: Patience. And succession planting. Handpicking into a container of soapy water will decrease the damage. Row cover and kaolin clay can help when timed well with a likely beetle onset. Damage: Like aphids, squash bugs feed on plant sap and prevent the plant from moving water. Wilting leaves are the first sign of trouble, followed rapidly by the death of the whole plant. Squash bugs also feed on fruit, leaving sunken areas amenable to bacteria and fungus.

Appearance: Adults are pointy, hard-bodied, dark grey beetles, about half an inch long, with lanky legs. The nymphs are light green, then grey, and tend to feed in large groups. They have distinct, shiny copper, spherical eggs, often found in clusters on the underside of leaves. The only cool thing about these bugs is they have turquoise blood, but it stinks something awful and will linger on your hands and clothes.

Habitat: Adults overwinter in debris at the edge of the field or garden then emerge in late spring to mate and feed. They love debris and thrive under mulch.

Solutions: Handpicking the eggs weekly will reduce the infestation early in the season. Squash bug populations are weather dependent, as hot temps allow more nymphs to reach adulthood, and mild winters allow more adults to survive the cold. To deter bugs, keep the area free of mulch—or at least the area where the stem meets soil. Diatomaceous earth at the base of the plant can also be effective. 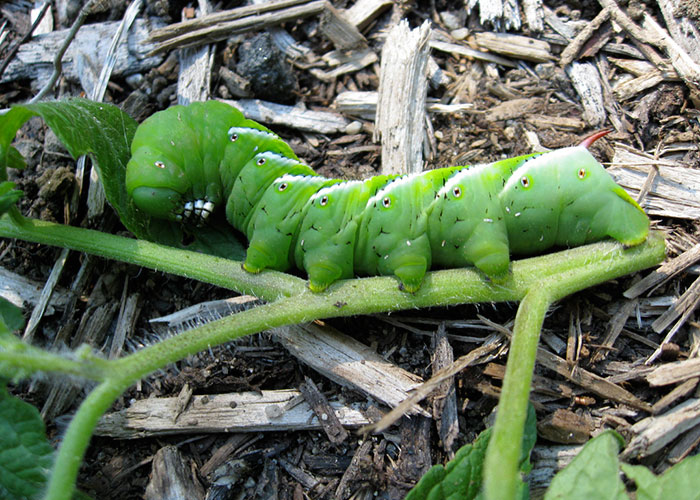 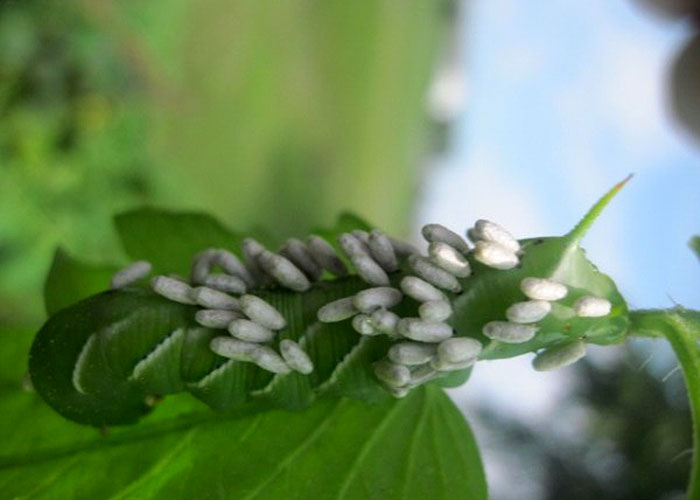 Damage: Defoliated plants. Because tomatoes can get so unwieldy, a hornworm might eat through two or three stems of leaves before the damage is noticeable.

Appearance: Hard to see because the bugs blend in with plant stems. Hornworms grow up to 3 inches long and are light green, with V-shaped white markings on the side body. Their distinct feature, and namesake, is a curved horn on the head.

Habitat: Hornworms overwinter as pupae in the soil and awaken in early spring. The moths can fly long distances, and there are some reports of migrations from the south. In warmer climates, it is possible to have two cycles of hornworms in a single growing season. Double the fun.

Solutions: If you find hornworms, squish them—but be careful what direction you stomp in. They’re juicy. And on second thought, look closely before you start squashing. The Brachonid wasp is a parasitic wasp that lays its eggs on the back of the hornworm. When the eggs hatch, they eat the hornworm from the inside out. So, when you see a hornworm with a row or three of white, oval-shaped eggs on its back, leave it alone. The worm might do some damage now but it will benefit the system later on. Bonus: Brachonid wasps are predators for a wide range of insects, including cucumber beetles.

One of the best ways to stay updated about pests is to sign up for your local Extension office newsletter. These are produced for commercial farmers but will have applicable information about pests and diseases in your garden. In fact, as we learned the hard way with the late tomato blight outbreak in New England, the more information gardeners have about infestation, the better coordinated hobbyist and career farmers can be to reduce the impact.

A couple of straightforward resources with good photos:

Got a question for Jessie? An insect you need help identifying? Another method for staving off squash bugs? Post a comment or photo below and keep the conversation rolling! You might also check out Jessie's 101 on transplanting and don’t miss the other 101s mentioned above: on natural pest control, soil testing, composting, cold frames, and fall and winter planting. You might also check out the homemade mosquito repellent 101. And you can always find more things to plant, grow, make, craft, cook, preserve, and pluck in the HOMEGROWN 101 Library.