The following 101 on community building was contributed by Margiana Petersen-Rockney. Margiana (that's her, far left) directs the Young Farmer Night Series in Massachusetts/Rhode Island with two other young farmers and is on the steering committee for the Beginning Farmer Network of Massachusetts. She is also developing a certified mobile kitchen, Pasture to Plate, that will allow farmers to host on-farm dinners and add value to raw farm products and services. HOMEGROWN can’t thank you enough, Margiana. We’re feeling more connected already.

MARGIANA’S STORY: WHY COMMUNITY IS IMPORTANT

As a kid, the hot summers and cold New England winters varied more for me in activity than in schedule. Until I went to college, I was homeschooled on a dairy goat farm in Rehoboth, Massachusetts. My education was experiential, and my activities were very often real world.

Many critics think that homeschooled children have no opportunity to interact with other kids or to develop social skills. Despite the fact that our culture is increasingly plugged into personal electronic devices, and much of our social time is spent on so-called social media, personal interactions and relationships are still high indicators of success and happiness.

As a homeschooler, I was forced to be intentional about my social interactions. I couldn’t just hang around after school or pass notes in class or eat lunch with my clique. I had to organize activities, meetings, play dates, and clubs. Thinking back, I find it interesting that these social-organizing skills learned as a child have proven some of the most useful and necessary for working in sustainable agriculture.

In college at Brown University, I studied 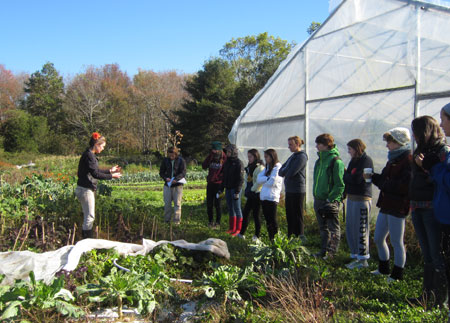 geology and biology, with a focus on nutrient cycling and soil science. I organized student groups and ran the student garden. I took a semester off during my sophomore year and bicycled through southern Mexico, Guatemala, and Belize, working on farms along the way. Returning from that trip with a renewed sense of purpose, I received a grant to start my own farm. Originally designed as a food justice project aimed at feeding low-income urban families, I quickly realized that the first step to food justice is making farming equitable for the farmer.

While still a full-time student, I created Rosasharn Farm CSA on five acres of land leased from my family’s farm. With a team of three interns each growing season, we grew vegetables to feed 50 families and a few restaurants each week, along with some pastured chickens and hogs. Education and community building were fundamental to the farm’s mission. We held monthly educational events for our CSA members and the public. We also led field trips and farm tours for school and camp groups of all ages.

Part of the reason for organizing these on-farm events was for our own personal gain. Farming is hard work, and it's even harder to get off the farm. In some senses, farmers live out the social anxieties associated with homeschoolers. Often much of the day is spent alone. By evening, you’re just too tired to go out. Relationships suffer, and farmers without a social support network are likely to burn out.

On a hot and muggy day in July 2012, the interns and I were weeding carrots and harvesting cucumbers when a storm cloud rolled in. For 30 minutes, hail the size of our fists pummeled the farm with enough intensity to shatter all the car windshields, tatter the leaves of our vegetable plants, kill several chickens, and leave our greenhouse cover resembling Swiss cheese. We were devastated. Months of hard work seemed to be for nothing, and we still had a responsibility to feed our CSA members. 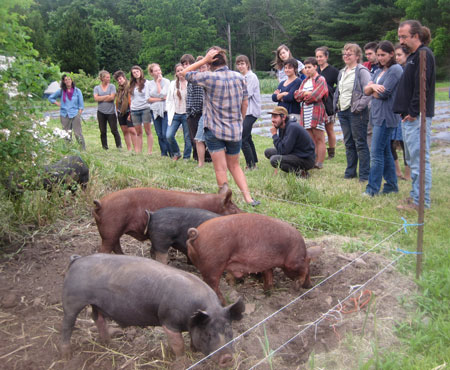 The community we had created by hosting events, workshops, and field trips rallied in our support. People donated time, equipment, and money to help us rebuild. Most importantly, though, these communities encouraged and supported us socially. Unlike how many farmers feel, we knew we were not alone.

It is not only in times of crisis that community connections are important. When I began farming, there was no community or network for beginning farmers. Everyone seemed to be alone. Creative invention is one benefit of reinventing the wheel, but there is more energy and less frustration to be gained by sharing knowledge and ideas.

I began organizing an informal series of potlucks and farm tours on farms near ours. By the second season, these Young Farmer Nights grew into a Young Farmer Network (YFN), and the biweekly events often attracted 20 to 40 people. YFN created a strong network of famers in southern New England who can work, learn, and collaborate together. The Young Farmer Network has grown to include more than 75 members who now share ideas, equipment, and enthusiasm for farming.

HOW TO IDENTIFY POTENTIAL COMMUNITY MEMBERS

When starting YFN, I reached out to a few farmers I already knew within a 45-minute drive of my farm. The fastest way to grow a network or community is to connect with other leaders and organizers who can bring their followers into the group. I specifically targeted farmers who were connected to other organizations or farms. Social media is a great place to form some of these initial connections and lay the groundwork for the in-person gatherings to follow. I sent emails, talked to people at conferences and events, and pretty soon I had generated some interest.

1. Start with social media. Organize and publicize there. Then—and this is important—meet in person. There’s still no substitute for communicating in person.

2. Target other leaders/organizers who can bring along their followers and friends.

HOW TO HOST A SUCCESSFUL COMMUNITY-BUILDING EVENT

1. Set dates for events ahead of time. It’s nice to have events on a specific schedule—for example, every Tuesday evening at six—but a set time could exclude people with standing commitments, so you might consider varying the day of the week. As for frequency, if events take place too often, people won’t feel motivated to attend, but if they don’t happen often enough, members won’t feel connected to the group. Every other week has worked well for us.

2. Make the events as open and welcoming 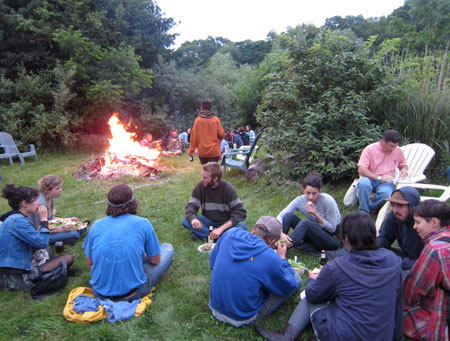 as possible. We never charge a fee; we always invite people of all ages, backgrounds, interest levels, and experience; and we encourage them to bring their friends.

3. Make it fun! Educational workshops are great, but people are more likely to get out the door and attend if there’s a social element, too. We always have a farm tour, a potluck, then an activity: music around a bonfire, games in the field, a movie night.

4. Don’t hold the event in the same place every time. Changing locations keeps things more interesting—and more inviting to people who are coming from different places.

5. If you do enlist different hosts for different events, offer yourself as an organizer to help them shape the event.

6. Once your events are set, publicize them online (Facebook, Twitter, email, listserves, et cetera, et cetera), and via posters and flyers. Ask those fellow leaders/organizers to do the same. Remember, the idea is to create community and make new friends. Be inviting!

7. Ask for help organizing. Community gatherings and networks usually start with one person, but for that person—maybe you—to make the network sustainable, you’re going to need help. A core team of two to four people is often best. Too many organizers can prove as challenging as too few.

LOOKING FORWARD: WHAT HAPPENS NEXT

At the end of 2012, I asked for help organizing YFN. We now have a team of three great people to share in the responsibility and brainstorm new ideas. In 2013, YFN plans to organize not only a summer series of on-farm events but also some indoor winter events featuring a discussion on farm policy and resources. For these winter events, we will be inviting organizations and resource providers to attend and connect with beginning farmers.

Another change is that we are partnering with another organization, the Beginning Farmers Network of Massachusetts (BFN/Mass). BFN/Mass wanted to help facilitate regional farmer gatherings—something we were already working on! We’ve found that it’s much better to partner with similar organizations than to create competing ones. And it means our community keeps growing.

PUTTING THESE IDEAS TO WORK IN YOUR OWN COMMUNITY

You don’t have to be a farmer to use these community-building techniques. No matter what or whom you are organizing: remember to think like a homeschooler. Be intentional about creating your social interactions. Reach out to those you want to get to know and interact with, not only online but also in person. Share stories and ideas over a meal. Ask questions and really listen to others. Let experiential learning drive your life-long education. A strong community and real social engagement will help you and your project be happy and successful.

Have more recommendations for ways to reach out? Got a question for Margiana? Or another suggestion for a type of community-building group or event to add to our list? Post it below and—you guessed it—become an engaged member of this 101. Speaking of, there are all kinds of ways to build relationships here on HOMEGROWN: You might join a group or post a photo or video. You might share a blog post in The Stew. Or you might respond to a fellow member's discussion or HOMEGROWN 101 and help fuel a conversation. If you need inspiration, check out the ongoing series Meet Your Neighbors, spotlighting a few of your fellow HOMEGROWN types. You might be interested in 101s on starting a food co-op, agritourism, and farm internships and sustainable food systems jobs. And you can always find more things to make, craft, cook, preserve, plant, grow, and organize in the HOMEGROWN 101 library.

ALL PHOTOS: COURTESY OF MARGIANA PETERSEN-ROCKNEY