This 101 was contributed by HOMEGROWN member Jenni, goddess behind the blog Domestic Efforts and a gal brought to you by the letter P (born in Poland, grew up in Pittsburgh, lives in Philly). Thanks so much, Jenni! We raise a crumbly cheese–topped cracker to you!

Most Polish families are likely familiar with farmer's cheese, a mild and soft cheese that resembles ricotta or firm cottage cheese. My mom has made it for years, using it as filling for pierogis and cheesecake and as a base for tomato sandwiches. After years of completely not paying attention to her technique, I decided to try it myself. It was surprisingly easy and yielded a delicious result. 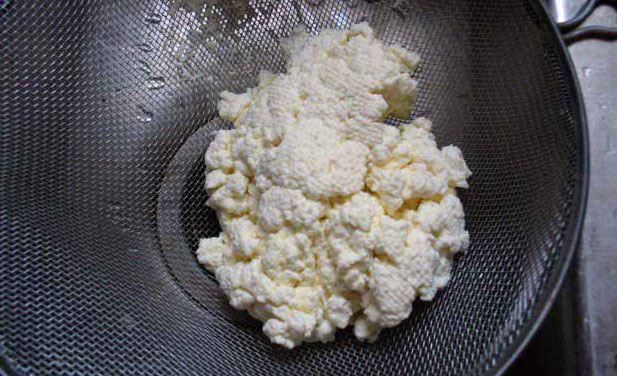 I started with a half gallon of high-quality local organic 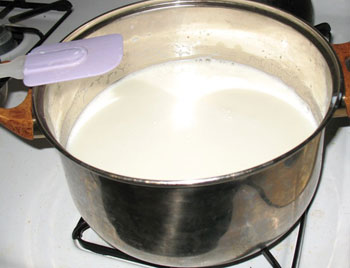 milk that was pasteurized, not ultra-pasteurized (a totally unnecessary process, in my opinion), and let it sit until it reached room temperature. I then heated the milk in a large pot, stirring often to prevent scorching, until it simmered.

Once the milk began to bubble slightly, I added the sour cream and white vinegar. My mom uses buttermilk, but I didn't have any on hand, and she said sour cream would do the trick. I've read that you can forgo the sour cream or buttermilk and just use lemon juice or vinegar (half a cup or so), but I like the idea of adding dairy rather than going heavy on either of the latter.

After adding my sour cream and vinegar, I turned off the heat and began slowly stirring. The curds and whey began to separate almost instantaneously. After stirring for another minute or so, I let the mixture sit for 10 minutes.

The final step was straining. Most sources suggest cheesecloth, but my mom usually uses a strainer, and that worked just fine for me, though I would have benefited from a finer mesh. The outcome was about 1/2 lb of cheese. Not bad for my first try!

Do you have a family recipe for farmer’s cheese? Or a question for our doyenne of crumbly dairy, Jenni? Post it below and keep the conversation rolling. You might also be interested in 101s on Cheese Pressing (Hard Cheeses), Goat Cheese, and Homemade Greek-Style Yogurt. And you can always find more things to cook, preserve, make, craft, plant, grow, and squeeze in the HOMEGROWN 101 library.

I keep telling myself I am going to venture into cheesemaking and this looks so easy, I cannot wait to try it!  Thank you for posting.

We want to try this but would like to use the buttermilk, for a half gallon of milk how much buttermilk would we use? and do we still add the sour cream? I think we could really get into this cheese making thing.

I was really hoping for a quiet day to get started on some cheese making.  This looks easy enough using ingredients I have on hand so it may happen sooner rather than later.  Thank you!