The following 101, on growing hops, comes from a pair of Pennsylvanians: HOMEGROWN member Diana, a gardener and science teacher, and her husband, Adam, who brews both professionally and at home. Adam is also partnering with family members to grow hops; Diana, his lovely assistant, enjoys reaping the benefits of his labor. While beer is the first thing that comes to mind when most folks think of hops (and a good one at that), hops are useful in a variety of ways. No matter what your intended use, a little planning, lots of direct sunlight, and ample vertical growing space can produce a hardy, easy-to-grow plant. Before you get started, there are a few basic terms you need to know:

» For home growers, the most important parts of a mature plant are the vines and the cones (think pine cones, except smaller). The cone is the part of the plant that adds flavor and bitterness to beer, as well as to tea. It’s also used in herbal remedies and sleep aids, and there’s even the traditional use of hops in a dream pillow: Place some dried hops along with other pleasant-smelling herbs in a sachet and hang it near where your head rests while sleeping. The vine of the hops plant can be used in making wreaths, and you can cook and eat the trimmed shoots left over after selecting the strongest-looking vines in the spring (more on harvesting below), as you would asparagus.

» Alpha acids are predominantly responsible for the bitterness in hops and are reported as a percentage.

» Beta acids also add bitterness but are considered harsher than alphas. They contribute an antiseptic quality to beer.

» There are three main categories of hops: aroma, high alpha acid, and dual use (or aromatic high alpha) varieties. Aroma hops are typically lower in bitterness, although some modern varieties bred for bitterness have become very popular. Bittering and super-high-alpha-acid hops tend to have higher levels of alpha acids, anywhere from 8 or 9 percent up to 20 percent. These varieties were bred to maximize bitterness while allowing a brewer to use a smaller quantity of hops. 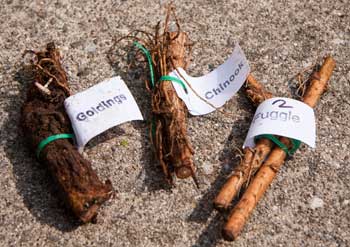 There are two ways you can start your own plant: from crowns or from rhizomes. A crown is a fully developed root system. A rhizome is a cutting from a crown meant for propagation. Think of a rhizome as a branch cutting from a rosemary plant that will root itself and grow an entirely new plant.

You can purchase rhizomes (at right, top) online from a number of sources, including Puterbaugh Farms, or you can find them at your local homebrew store in early spring, when hop farmers begin their field maintenance. A rhizome typically runs between ¼ to ½ inch in diameter and 4 to 6 inches in length. Expect to see common varieties, such as Nugget, Columbus/Tomahawk/Zeus, Cascade, and Centennial; newer varieties, such as Citra, 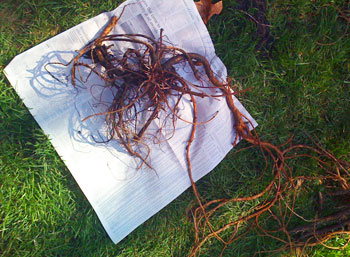 Amarillo, Mosaic, and Simcoe, are patent protected and not available to home growers.

Growing from rhizomes requires some patience, as they take a little while to develop. In years 1 and 2, the plant’s root system is still developing; by the third year, the plant should be in full production. In year 3, you can even cut and trim your hop crown to sell or give rhizomes to others.

The other way to obtain hops to grow is by purchasing hop crowns (at right, bottom) from a vendor, such as Great Lakes Hops. Fully rooted plants and crowns offer an advantage over rhizomes, as they grow more expansively the first year and produce harvestable cones sooner.

The world’s commercial hop farming clusters in certain regions due to climate and length of day during the growing season. According to the USDA, most occurs between 35 and 55 degrees latitude in the northern and southern hemispheres (in the United States, from the southern border of Tennessee northward). Hops can be grown outside these regions, but yields will be lower. In the United States, Washington State grows almost four times more hops than the next two hop-producing states combined. Historically, Pennsylvania and New York were large hop-growing states, but crop disease and the lure of Washington’s ideal climate caused large-scale commercial cultivation in those states to decrease and, eventually, end.

Growing hops at home, though, is a different story entirely. While the commercial industry is concentrated in a few locales, hops can grow well anywhere, given the appropriate soil and maintenance.

HOW TO PLANT AND TEND 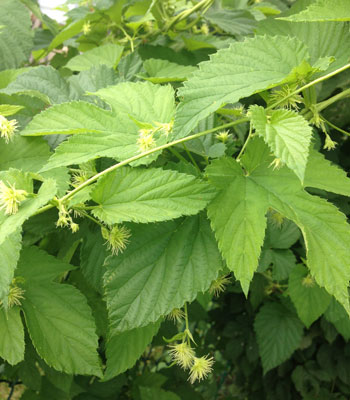 The basic requirements for growing hops are plenty of space, lots of direct sunlight, and easy access to water. To prevent rot, hops should be planted after any chance of frost has passed, typically early spring but no later than May. Rhizomes and fully developed crowns should be planted 1 to 2 inches below the soil surface, in well-draining soil with any buds pointing up. Ideally, the soil will have a pH of 6.5 to 8.0 and will be rich in potassium, nitrogen, and phosphates.  Organic fertilizer and manure can provide any nutrients you’re lacking. (Not sure where your soil falls on the pH scale—or what’s in it? Check out the Soil Testing 101.)

Be sure not to overwater the first year, while the young plant (at right, top) is establishing its root system. The soil should be moist but not wet. Too much moisture promotes diseases like downy mildew; more on that under "Pests and Problems," below. Water your hops as you would tomatoes, only a little more conservatively. If hops are improperly watered or if the soil is lacking nutrients, the plants will display hermaphroditic qualities, growing both male and female flowers. Don’t worry if that happens; the plant will still produce cones (those are young cones in the photo at right). The main drawback is a lower yield, since the male flowers are sterile; only the females produce cones.

Hops can grow up to 25 feet tall at maturity and should produce one or two pounds of dried cones per plant. You’ll want to plan ahead as to how you’ll support your rapidly growing plants. The emergence of the vine depends on your climate and location, but you can typically expect it when other spring flowers begin to appear.

Once the vines are approximately one foot long, wrap the strongest vines around a support system. Tall poles and string are common, but fences and other tall structures work well, too. A good support system is key to keeping the vines off the ground and to avoiding disease. You’ll also want to make sure each vine has plenty of space to grow without tangling.

It’s not necessary to support each and every vine; supporting the strongest vines while trimming back the weakest ensures that your hops have plenty of space to thrive. Be sure to keep up with trimming and supporting the vines throughout the growing season in order to avoid tangling and to ensure a better harvest. After the harvest each year, the plant will die back to the ground. Letting it do so naturally helps strengthen the plant, a perennial, for the next growing season.

WHEN AND HOW TO HARVEST

Hop vines typically grow until around mid-July, but your harvest time will vary by location and could occur in August or September. You’ll most likely be able to harvest multiple times, as cones at the top of the plant often mature faster than the ones down below that get less sunlight. So, when is a hop cone ready to harvest? A cone is harvestable when it feels dry and light—much drier than a damp green cone. You’ll also smell the ripe cones, and they may feel slightly sticky.

Once the hop cones are harvested, it is important to dry and store them properly so they don’t mold or go rancid. You can use a food dehydrator or oven, but make sure to dry them at a low temperature: below 135 F. especially motivated. Simply spread the cones in a thin layer on an old window screen, allowing for good airflow. The cones will take between three and seven days to dry, depending on the ambient humidity in your region. Another option is to stack a series of household air filters with thin layers of hops sandwiched in between them and to set the entire thing on top of a box fan, which speeds up evaporation. Fans and air filters conveniently both come in 20-by-20-inch sizes. Depending on the strength of the fan, you probably wouldn’t want to stack more than ten layers of filters high.

When the powder inside the cone falls out readily and the cone springs back when touched, it’s dry.  Store dried cones in a zip-top bag, well compressed, with any excess air squeezed out, and place them in the freezer. We like to use a bag sealer, but that’s not necessary.

While hops typically are a hardy plant, it’s important to keep 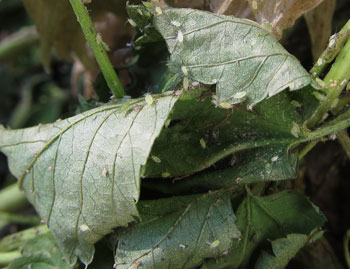 an eye out for various pests and diseases. You certainly don’t want a few years of hard work to go to waste! Downy mildew is a common issue in the spring, as the plants begin to grow. You can identify it by brittle or spiked shoots and black, curled leaves on your hops plant. If you spot downy mildew, remove any infected leaves to keep the disease from spreading to the rest of the vine. You can prevent downy mildew by avoiding overwatering—or even removing the leaves from the bottom two or three feet of the plant. (These don’t produce cones anyway.) Organic fungicides are another way to control downy mildew.  Wilt is another common issue and can be spotted and treated similarly way to downy mildew.

And then there are hop aphids (pictured at right), dangerous insects that can destroy entire hop crops. They show up in cooler weather and are easy to spot on the undersides of leaves. Keep an eye out for them and be sure to kill them quickly with organic insecticides before they hatch and spread. Ladybugs are natural predators of aphids, so releasing ladybugs around your hop plants is a good way to prevent or control a potential aphid infestation. Mites and cucumber beetles also attack hops, but they, too, are treatable with insecticides. Now, hop to it—and good luck!

Got a question for Diana and Adam? Or another hopportunity to share? Post it below and keep the conversation rolling. You might be interested in joining the Brewers Pub group here on HOMEGROWN, and if you’re looking for more things to grow, check out 101s on growing asparagus, broccoli, radishes, lettuce, microgreens, peas, and garlic. You can always find more things to plant, grow, make, craft, cook, preserve, and harvest in the HOMEGROWN 101 library.

superb article on hop growing. I would add that hops can make a great screen ands they tolerate our ferocious cold weather here in NW wyoming.

Hi, Cal! Do you grow hops yourself? If so, what variety?

That's the best article I've read on hop growing (and I've read quite a few).  My Nugget hops are off to an encouraging start but the Mt. Hoods haven't made an appearance.  Do you think this far into Spring I should write them off of do you think there's still a chance they'll pop up?  It's the third year for both varieties.