The following 101, on homemade gnocchi, comes from HOMEGROWN's flock tender, Jennifer, who will happily talk your ear off about pasta toppings. Post a comment below and share your own favorites!

The purple potatoes that arrived in my farm share last week were so pretty, they seemed to be calling out for some kind of special treatment. Five minutes and some rapid-fire Googling later, I had an idea. What about gnocchi, those soft-as-butter nuggets of potato pasta? 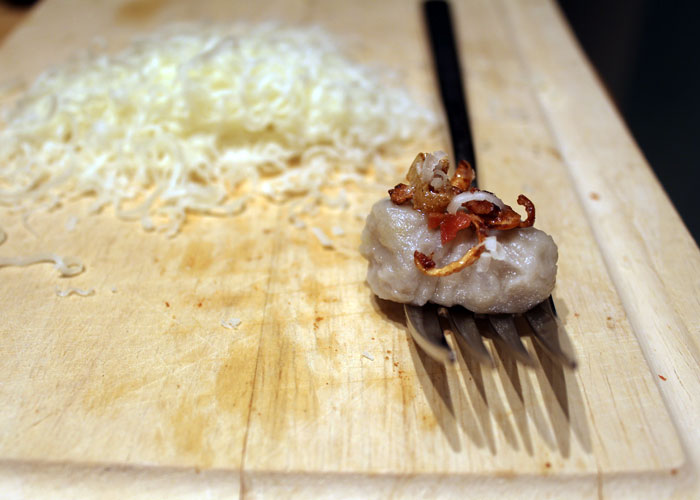 Now, I’ve never tried making any kind of fresh pasta, even though HOMEGROWN member Jannine wrote an awesome 101 demystifying the process. My excuse has been that I don’t have a pasta machine, but that’s actually code for “I’m still a little intimidated.” Gnocchi, however, isn’t complicated, and you don’t need any special gadgets—or ingredients—to make it. Just some potatoes, flour, an egg, salt, and butter. How badly could I screw that up?

Not badly at all. I’d go so far as to say it turned out pretty well and not at all rubbery or tough. Pillowy, even. Although I was nervous about getting the flour-to-dough ratio right, it was a cinch once I relaxed and trusted my fingertips. And if I can make gnocchi, YOU can make gnocchi. In fact, let’s make it together.

» 1 to 2 cups all-purpose flour, plus extra for your work surface

» salt and pepper to taste

1. Scrub your potatoes clean and cut them in half—or quarters, if you’re working with larger spuds. Put the potatoes in a large stockpot and cover them with at least 1 inch of cold water. Bring the pot to a rolling boil and let it cook 10 to 15 minutes, until the potatoes are fork-tender. 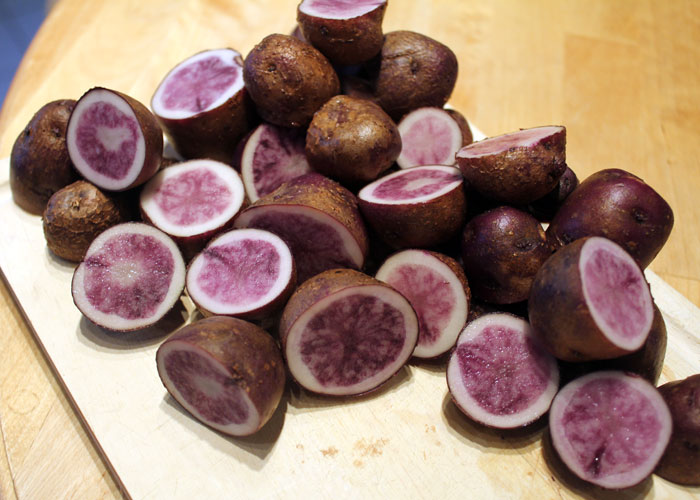 2. Drain the water from the pot and transfer the potatoes to a clean bowl. Cover the potatoes with cold water and swish it around a bit to bring the temperature down. You want the potatoes to remain warm but you want to avoid burning your fingers. When you can safely handle the potatoes, slip off their skins and discard.

3. Add 2 Tbsp butter and 1 tsp salt to the potatoes and mix well with a fork or a potato masher, as if you were making mashed potatoes. (Some recipes I saw online called for putting the potatoes through a ricer, but I don’t have one of those and can’t see that my gnocchi suffered for it.) Whip like you mean it, until you’ve got a really fluffy consistency. At this point, your potatoes should still be warm (good) but not hot (bad).

4. Transfer the mashed potatoes to a floured work surface. Spread the glob out a little and form a well. Crack an egg into the center of the well and, using a bench scraper or a spatula, work the edges of the potatoes in, so that you start to thoroughly mix in the egg. Begin adding flour as you mix. You’re aiming for a not-at-all-sticky texture that’s smooth to the touch. I ended up using about 1 1/3 cups flour, total. I kept adding flour until the dough didn’t adhere to my fingers. Once you’ve got a uniform hunk of nonsticky dough, divide it into four quarters and set three aside. 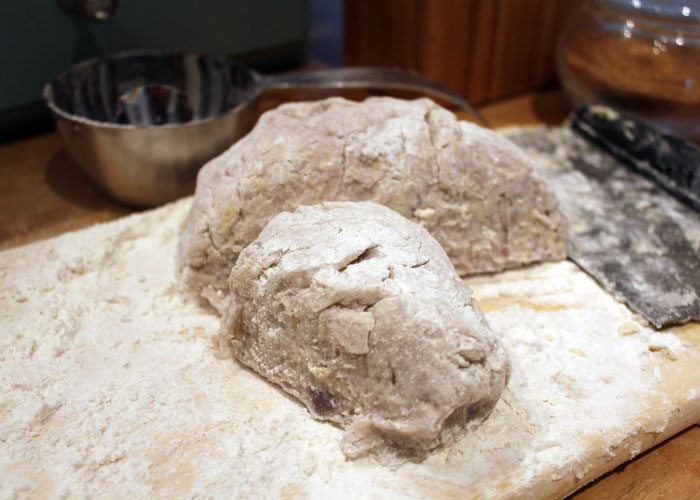 5. Take the first quarter and roll it into a ball, then a log, then a rope. You’re aiming for a nice, long snake, about 3/4” in diameter. Use a knife or bench cutter to cut the snake into gnocchi-size bites, about 1” long each. When you’ve cut the entire snake to pieces, move on to the next quarter and repeat, until you’ve cut all of your dough into gnocchi. 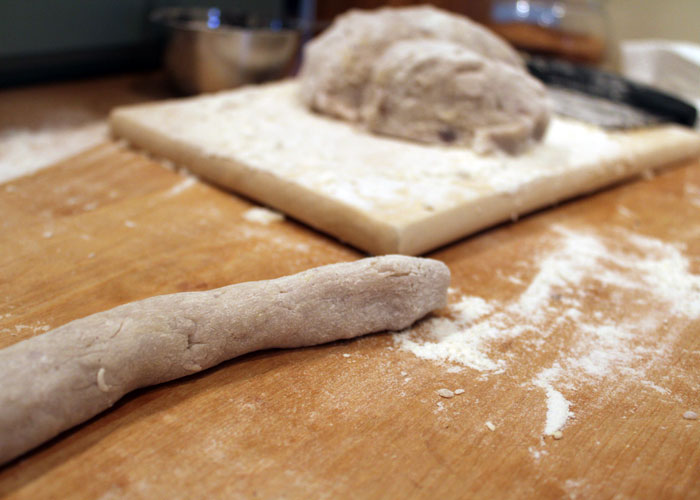 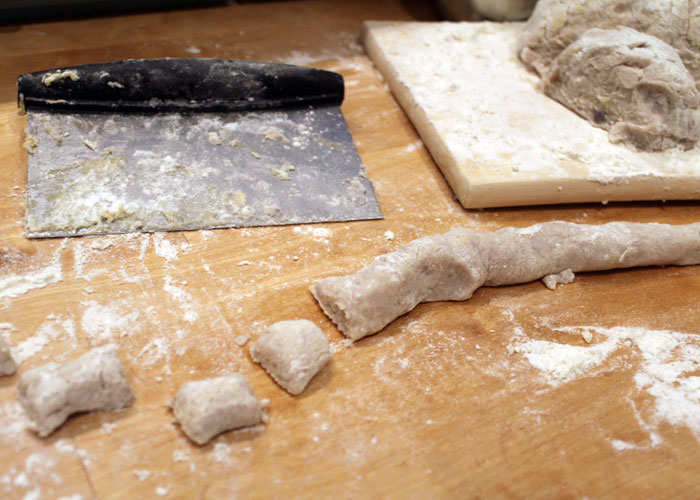 6. Take your individual gnocchi (my very limited Italian—Please! Thank you! Where is the duomo?—tells me the singular should be something like “gnoccho,” which is even more fun to say than “gnocchi”) and roll them down the backside of a fork to get those traditional gnocchi scores. Full disclosure: If you’re not a purist, skip this step. Achieving those little ridges is the most time-consuming part, and your taste buds won't know the difference. 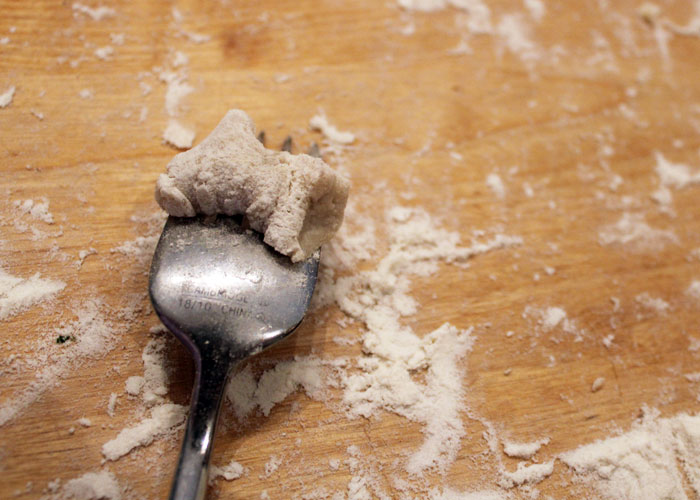 7. Set your formed gnocchi on a floured plate and bring a stockpot of cold water to boil. Drop the gnocchi in about a dozen at a time. You want to avoid overcrowding the pot—and overcooking. This’ll go fast: Once the gnocchi bob to the top, count to ten and remove them with a slotted spoon. Set the cooked gnocchi on a plate and start the next batch, continuing until you’re done. 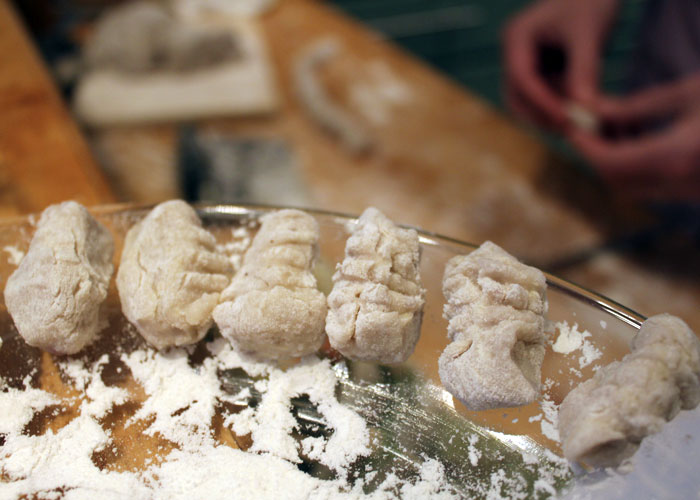 8. For a quick topping, my sous chef (aka spouse) cooked two slices of bacon in a skillet. When those were done, he transferred the bacon to a plate and added three cloves of minced garlic and one bulb of finely sliced fennel to the bacon grease and sautéed for about five minutes. We then added the gnocchi and the chopped bacon to the skillet and tossed everything together—gently!—before serving up bowls topped with freshly grated Parmesan and pepper. Delicious success! 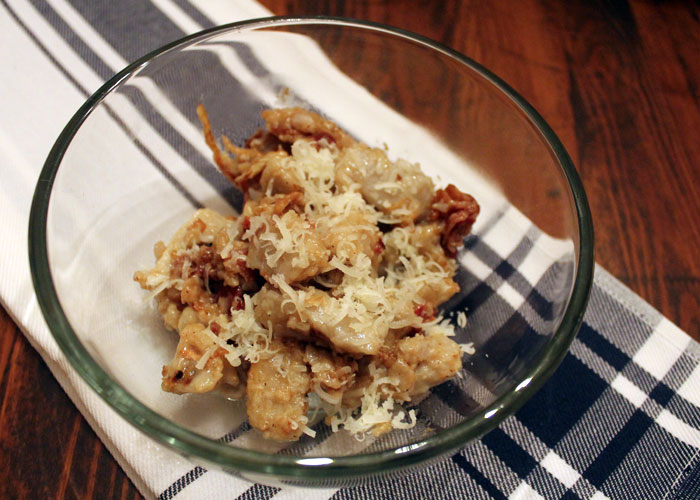 The texture of these was so much more delicate than I’d expected—really soft and melty, not gummy or dense, like I had feared. Because the dough is so light, you really don’t want a heavy sauce or lots of fixings covering up all of your hard work. (Not so hard, actually, but your dinner guests don't need to know that.) Even a simple browned butter with fresh rosemary would do the trick, although I loved the crunch of the fried fennel. Got another topping in mind? Share it below and spread the love!

Got a question for Jennifer or a tip to add? Post it below and keep the conversation rolling. You might also be interested in Jannine’s Homemade Pasta 101, a not-at-all scary introduction to flour-based noodles. If you want to REALLY make gnocchi from scratch, check out Jana’s Potato Tower 101 and grow your own spuds. For another good use of purple potatoes, try this twice-fried method that's perfect for fish and chips then peruse more farm-share-friendly recipes in the CSA Cookoff. You can always find more things to cook, preserve, make, craft, plant, grow, and mash in the HOMEGROWN 101 Library.