Donna posted a member blog about Ollas, and the discussion revealed some useful tips for making your own!

First, what the heck is an olla??

An olla is a ceramic jar, often unglazed, used for cooking stews or soups, for the storage of water or dry foods, or for other purposes. Ollas have a short wide neck and a wider belly, resembling beanpots or handis.

Because water seeps through the walls of an unglazed olla, these vessels can be used to irrigate plants. The olla is buried in the ground next to the roots of the plant to be irrigated, with the neck of the olla extending above the soil. The olla is filled with water, which gradually seeps into the soil to water the roots of the plant. It is an efficient method, since no water is lost to evaporation or run-off.

Ara at My Edible Yard discussed using Ollas for irrigation.

We were intrigued. We do a lot of watering, especially in the summer. Tomatoes are thirsty.

Tim did the research and found that we could buy them, but they were a bit pricey. $20 or more each. Yikes. We starting counting up how many we would need. Double yikes.We have six 8x4 raised beds, and too many pots to count.

In one of the comments at Ara's site, someone mentioned re-using plastic water bottles. Poking small pin holes in them, and then burying them like you would an olla. Now, we don't get water in plastic bottles at home, but I *do* have them at work. And work has a nice little recycling bin for all those plastic bottles. Ripe for the picking.

I scavenged all that I could from work. I searched the pantry for anything in a plastic bottle. I rifled through all the cupboards. I emptied out the vegetable oil into a mason jar. There went the honey into a mason jar. Tim used the last of the vinegar and gave me the container.

I put six in the bed with the snap peas. 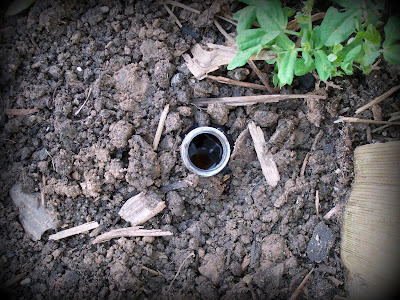 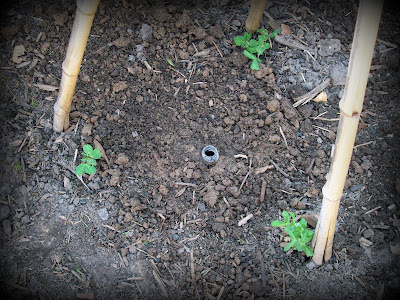 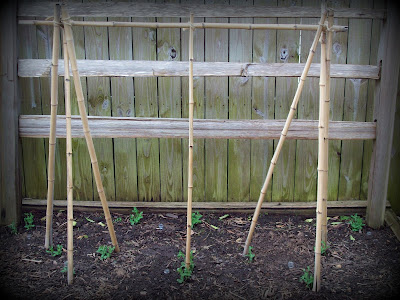 I put one each in two strawberry pots. And nine more in various other pots. I still have to scavenge enough for five more raised beds.

Another method that I have used it to save milk jugs.  You make the holes in them the same way, and bury them the way the ollas are buried.  Also, you can find cracked pots at nurseries and other places that sell them.  You can hot glue a saucer to the top of a clay pot, invert and bury it, and voila!  - you have an olla.  No hole necessary as the clay pots will work the way the olla does.  You might need to stick something in the hole of the pot just to keep it marked since it doesn't have  neck like the ollas.  - just athought, but all of theses methods have been effective for me. 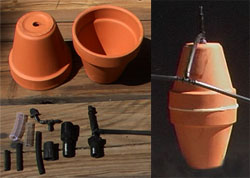 Matthew linked to this web site that shows the two clay pots method hooked up to rainbarrels, a timer, and drip line - genius! 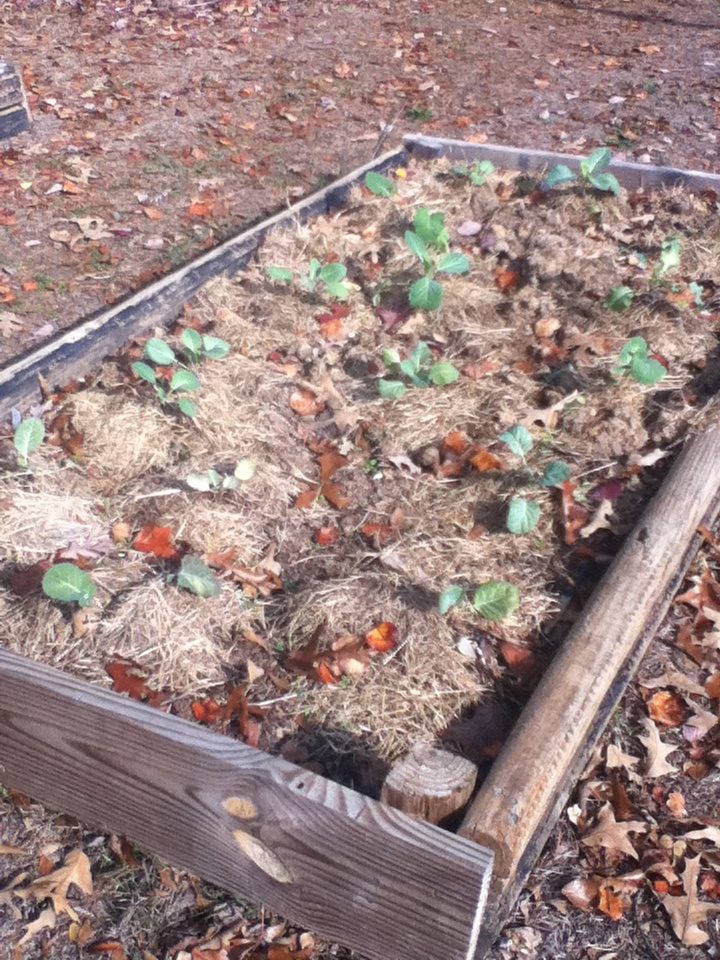 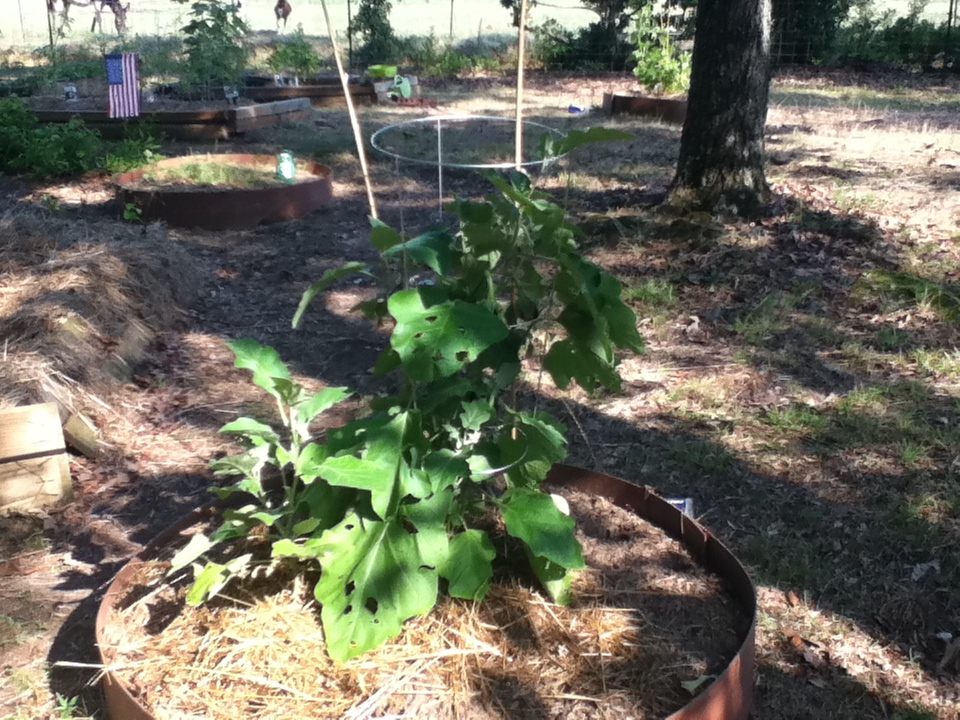 I'm also very keen to try the milk jug idea. However I too am a little mystified as to how many holes etc. I think it will maybe have to be trial and error.

A thought I did have though is to place screen, or cheesecloth over the opening. This way the jars or bottles won't fill up with sediment, and it will keep a frog, lizard, etc., from getting trapped inside and not being able to get out.

Any other input on this topic?

I tried the 2 liter soda bottle it didn't work very well kept getting clogged up. The raised beds dry out quick especially in the hot Georgia sun. We had so many days with the temperatures in the 100's and heat index of 105, my garden down at the bottom of the woods did much better. This is all that is left green beans,squash 4 and plenty of hot peppers and sweet potato's.  Ellen from Georgia 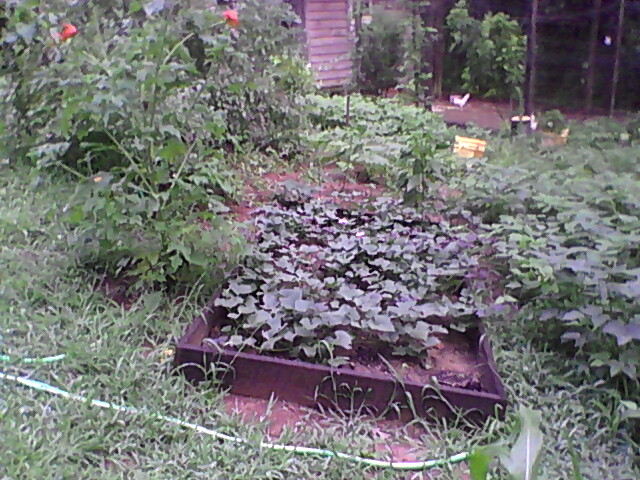 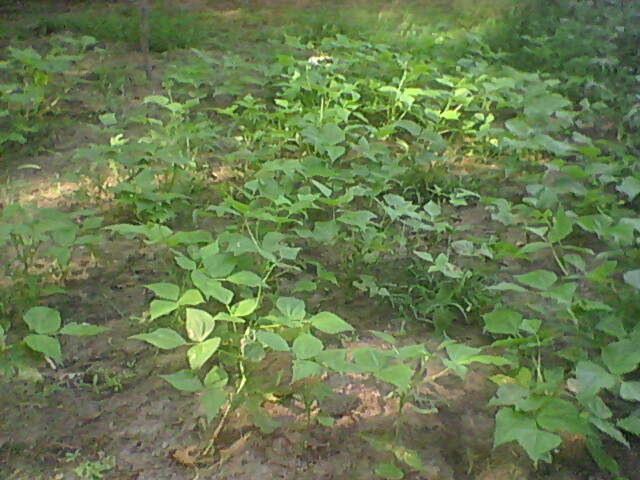