The following 101, a recipe for homemade pop tarts, comes from HOMEGROWN member Cynthia, the smart cookie behind the blog A Life Beyond Money. Cynthia, thanks for sharing this warm and toasty treat! I never cared much for those prefab pastries that come in a blue box. The dough didn't taste good, the fillings were off, and they left you hungry as soon as you finished them. I stopped eating them as a child and never bothered again—until one beautiful day: the day I made pop tarts from scratch. Oh, my.

They were wonderfully flaky. The pastry was rich with butter and of perfect texture. The filling was real and explosive. And wonder of all wonders, two of these little pastries filled me up for a glorious breakfast.

Making pop tarts from scratch is easy, frugal, and allows you to experiment with lots of fun flavors. In my two-person household, we used to have a hard time using up an entire jar of jam or jelly in a reasonable timeframe. But now that I make pop tarts, we’re able to use up a jar before it goes bad. Homemade pop tarts are also incredibly frugal. I did a cost analysis of the flour, butter, egg, and fillings and found that the homemade variety is about 16 to 20 cents each, with two or three being a decent breakfast for me or my husband. This is cheaper than the store-bought ones that cost about 33 cents a pop where I live and aren't nearly as delicious or filling—or free of suspicious-sounding ingredients, for that matter.

Making pop tarts is ridiculously simple, although it does take some time. I like to set aside a couple of hours to make a massive batch, all at once. Raw pop tarts freeze brilliantly, so you can pull out a couple and toss them in the toaster oven for an easy breakfast or a sweet-tooth fix. Make a few different flavors at once and you'll satisfy any craving!

I use a pie dough recipe from King Arthur, but you can sub in the pie dough of your choice. 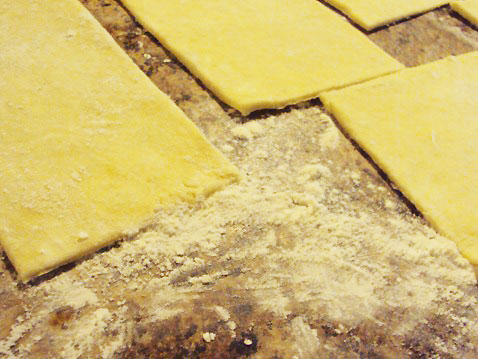 » filling of your choice, such as jams or jellies, nut butters, spreads, etc. (See ideas below!)

» rolling pin (or wine bottle, in a pinch)

To make your pie dough as flaky and tender as possible, you need all of your ingredients as cold as can be. Crack one egg into a bowl and put it back in the fridge. Cut the butter into pats and place them in the freezer until just before you begin. If you want your dough to be perfect, you can even pop the flour, sugar, and salt in the freezer. If the butter melts, it will absorb a lot of flour, making for a tough dough, so you want to do whatever you can to prevent that—including handling it as little as possible.

When you're ready to make your dough, mix together the flour, salt, and sugar. Add the butter pats then, using your pastry cutter, mix in the butter until it’s in pea-sized pieces, not fully blended. These little bits of butter will make for a flaky crust. Once the butter is roughly pea-sized, add one egg and the milk. Mix just until it’s combined. Don't overbeat it. You can (and should!) store this prepared dough in the fridge until you're ready to make your tarts. 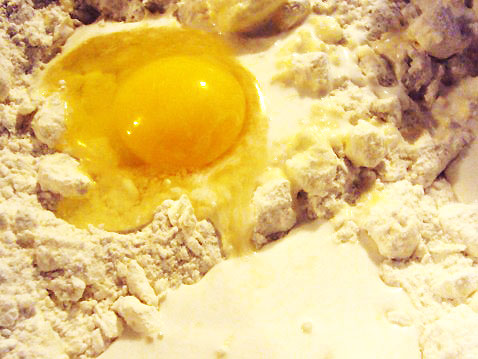 Clear a workspace and liberally sprinkle it with flour. Pull the pie dough out of the refrigerator and place it on the flour. Sprinkle the dough lightly with flour and very lightly coat your rolling pin to keep the dough from sticking. Roll the dough out to 1/8 inch thick. 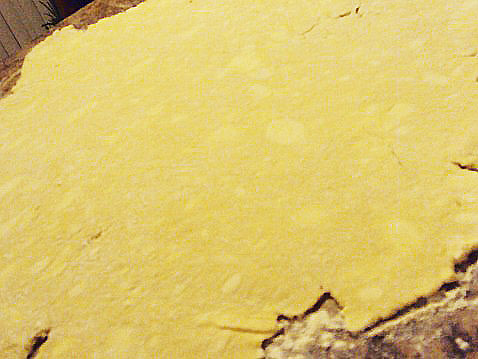 Using a butter knife or a bench knife, cut the dough into rectangles about 3 by 4 inches, or whatever size your heart desires. You can even use cookie cutters to cut out fun shapes or your can make tiny two-bite pop tarts. If you make super small pop tarts, roll the dough a little thinner to keep the filling-to-pastry ratio in balance. 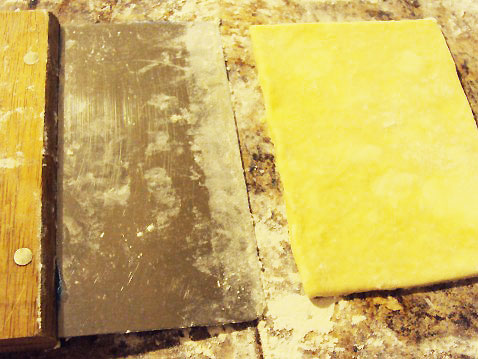 Beat the second egg to use as an egg wash. Place about a tablespoon of filling on one half of each pop tart. You can use jam or jelly, nut butters, or one of the suggestions listed below. Spread evenly but make sure you leave a good centimeter of space around each edge and the other half bare. Brush the egg wash around the edge; this will act like glue to keep the filling inside. 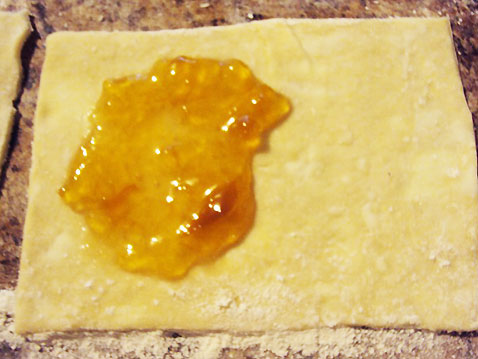 Fold the bare half over the filled half and gently press the edges to seal the pieces together. Using the fork tines, press about 1 centimeter in all the way around the edges. This seals the dough closed and looks beautiful. 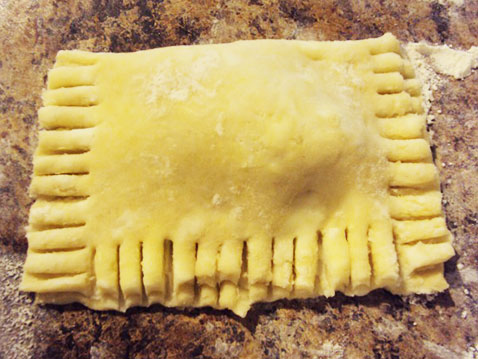 Steam will need to escape, so you’ll need to cut some holes in the pastry top. Either prick the top side of the dough several times with a fork or use the paring knife to cut out shapes or initials. If you have mad scoring skills, you can cut notes, initials, or simple drawings into the pop tarts for fun. 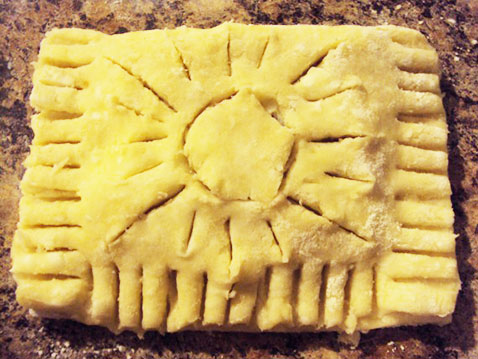 Now it's time to chill the pop tarts. You can either chill them for half an hour in the refrigerator or freeze them to bake another time. If freezing, do so on a flat surface then transfer them to a freezer bag once they’re completely frozen.

When it's time to bake them, brush the top of the pastry liberally with egg wash, if desired. (I enjoy them either way. They’re shinier with the egg wash but look more rugged without it.) If you'd like, you can sprinkle the tops with decorative sugar—the bigger grain, the better—which the egg wash will hold in place. If you plan to ice the pop tarts, don't add sugar. Bake in a 350 degree oven for 25 minutes or until the tarts are golden brown and solid on the bottom. Perfect doneness occurs just after you smell something so incredible, you’ll be prepared to burn your tongue off just to get those tarts in your mouth RIGHT NOW. 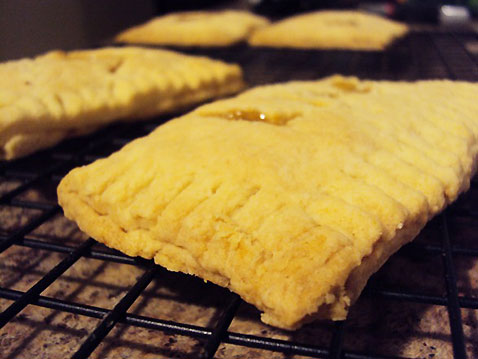 Allow the tarts to cool for 10 to 15 minutes—if you’re able to wait that long. If you want to ice them, you can use any icing you'd like. My favorite simply requires mixing together 1 cup powdered sugar with 1 to 2 Tbsp milk. You can make this thick (less milk) to spread over the still-warm tarts, allowing it to run off the sides, or you can make it thinner (more milk) and drizzle it across the top with a fork.

If you bake a large batch of tarts at once and plan to reheat them in the toaster later, don't ice them. Wait until they come out of the toaster. Unlike the store-bought pastries, this homemade icing won’t stick to the pastries when they’re standing straight up in the toaster. And really, when you think about it, what's in the store-bought stuff that makes it impervious to toasting? Shiver. Let’s get back to the real food: filling suggestions below! Unless otherwise specified, use 1 Tbsp filling per pop tart.

» S'mores: 1 Tbsp marshmallow cream, a pinch of crushed graham crackers, and several chocolate chips. For a campfire touch, sprinkle a bit of smoked sugar over the egg wash before baking. 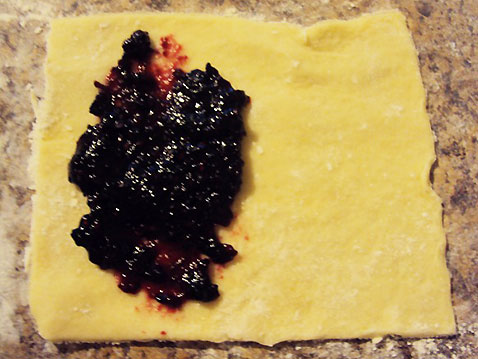 Got another filling idea, a favorite dough recipe, or a question for Cynthia? Post your comments below and keep the convo rolling! Home bakers, confectioners, and the sweet teeth who love them might be interested in 101s on homemade cronuts, homemade peanut butter cups, cultured butter (bonus: cultured butter cookies!), homemade extracts (think vanilla and almond), sweetened condensed milk, rendering lard, homemade crackers, pectin, apple cider caramels, or chai to go along with your pop tarts.

And speaking of those tarts, check out Cynthia's other easy-to-follow 101s, on making simple and flavored syrups, homemade chocolate syrup, and bone broth; smart ways to use bacon grease, apples, and stale bread; crafting tote bags from t-shirts; roasting your own coffee beans; and brewing dandelion coffee. You can always find more things to make, craft, plant, grow, cook, preserve, and devour in the HOMEGROWN 101 library.