How to Make Evaporated Milk 101

The following 101, on how to make evaporated milk, comes from HOMEGROWN’s flock tender, Jennifer, who sometimes is curious enough to investigate further (see below) and sometimes is content to let sleeping dogs lie (how much cholesterol is in bacon, anyway?). While making a pumpkin pie back before Thanksgiving, I found myself wondering where evaporated milk comes from. From cow’s milk, surely, but what mysterious process takes things from point A to point B? A quick search cleared that right up: Evaporated milk is simply milk that has been reduced in volume by at least 60 percent. Easy enough, but when the grocery store carries the stuff by the case, why would you bother making your own?

You might not. Then again, you might, especially if you want control over the type of milk that’s getting reduced—that whole “the more you know” thing. In some stores, you can find high quality evaporated milk; in others, not so much.

In the name of HOMEGROWN, I decided to try evaporating milk at home. I read a fair amount before getting started and learned that there are basically two camps: those who rapidly boil the milk and those who simmer it low and slow. I found this thread from the Seasoned Advice forum to be especially helpful in the rapid-boil method. For the slow-and-steady approach, I liked this post from She Simmers; check out the comments for a discussion of how the body processes the proteins in milk.

I tried both methods and found the latter, low and slow (on the right, in the photo above), to give me more control. Things happened, well, slower, so I was in less danger of burning the milk. My end result from the rapid-boil method (on the left) had more of a scorched hint and was thicker in consistency. I didn’t like the flavor quite as much, but I don’t think it would noticeably alter the taste of whatever end recipe I used the evaporated milk in. In short, slower won the race, but I wouldn’t hesitate to go the speedy route again, especially if time was an issue. Instructions on both below. 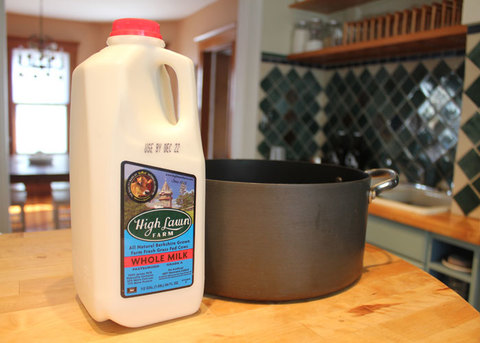 » high-quality milk (The consensus on the Interwebs is that whole milk delivers the best results; I used a local-to-me grass-fed variety, from Massachusetts’ High Lawn Farm.)

» a heavy-bottom nonstick pot, the wider the better (This should be at least six or seven times the volume of your milk, since the milk will foam voraciously while boiling.)

» a wooden spoon or rubber spatula

» something to use as a measuring stick

» a container for your final product

WHAT TO DO: THE RAPID-BOIL METHOD

1. Measure out your milk. You’ll want at least twice the amount of whatever your end recipe requires. For example, if you’re making a pie that calls for 18 ounces of evaporated milk, you’ll want to start with at least 36 ounces of whole milk—but, really, tripling or quadrupling is better, so you don’t come up short. I started with 32 ounces of whole milk in each trial and ended with 10 ounces, give or take, each time.

2. Pour your milk into your pot. If your pot doesn’t have measurements marked inside, you’ll want some way to keep track of volume. I stuck a chopstick in the milk, measured where the milk hit, made a small notch (to avoid using ink that might touch my food), then made another notch a little less than halfway up to the first notch. That second notch was where I wanted to end up. In my book, eyeballing is A-OK. 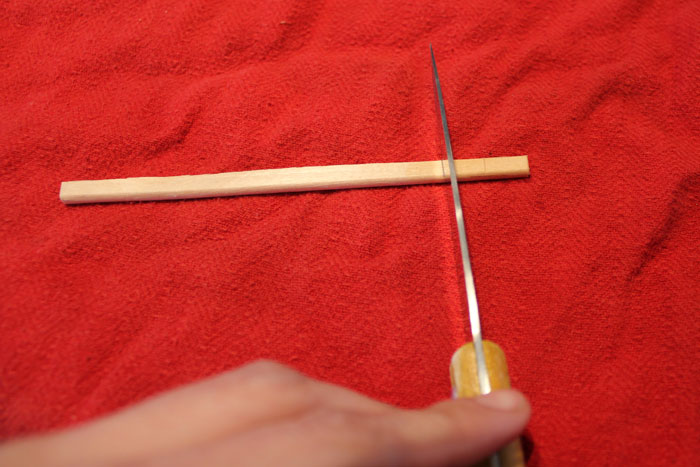 3. Bring your milk to a rolling boil over high heat, stirring constantly. One note: Boiling milk doesn’t look like boiling water, with lots of bubbles. It looks more like puffy foam. Stir constantly. One other note: Even with constant stirring, you'll end up with some clumps and brown bits. Don't sweat them. You'll strain them out later. 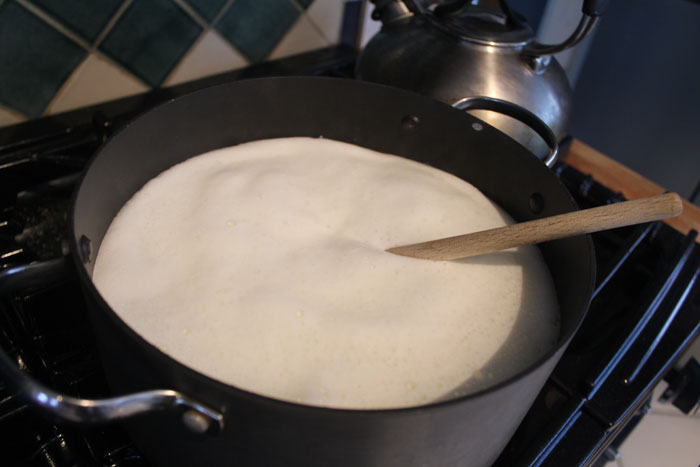 4. Check your volume. In my trial, the milk dropped to the lower notch right around 20 minutes. 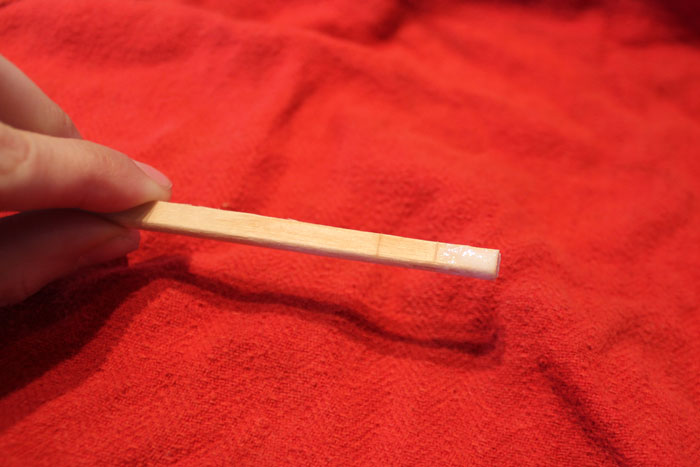 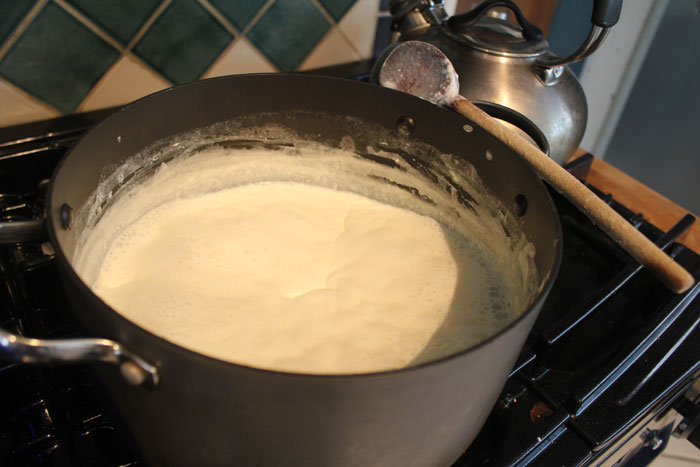 5. When the milk has reduced by 60 percent, you’re good. Pour the milk through a strainer and into a bowl or jar. Use a spoon or spatula to push as much of the milk through the sieve as possible. You’ll have some sludge left behind, but you want to coax out as much liquid as possible. This is your liquid gold! (OK, maybe white gold. Or platinum, if you're extrafancy.) 6. Let your evaporated milk cool completely. If not using immediately, refrigerate up to a week or two.

PROS: Fast. Also, because the milk stays at a rapid boil, it doesn’t form a skin, which means less byproduct waste.

WHAT TO DO: THE LOW AND SLOW METHOD

4. As soon as the milk comes to a boil (watch for foam!), turn the heat down to the lowest low. From here on out, you can stir every few minutes instead of constantly. For the first few rounds, I set a timer for 8 minutes between stirs, then lowered it to 7, then 6 as the milk evaporated and the pot retained more heat. Because the milk isn’t rapidly boiling in this method, it does form a skin. Don’t worry about fishing that out mid-evaporation, as more will form in its place; do be sure to break it up when you stir so that it doesn’t form a seal and prevent further evaporation. 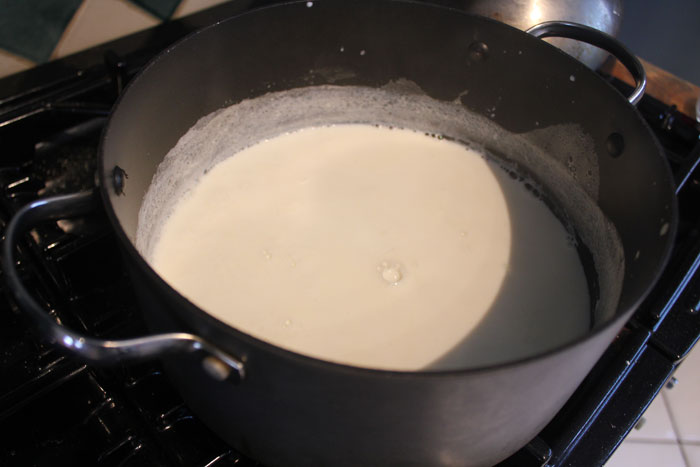 5. Same as above: When the milk has reduced by 60 percent, you’re good. For me, starting with about 32 ounces of whole milk, this took almost exactly an hour and a half. Pour the milk through a fine-mesh sieve and into a bowl or jar, again using your spoon or spatula to push as much liquid through as possible. 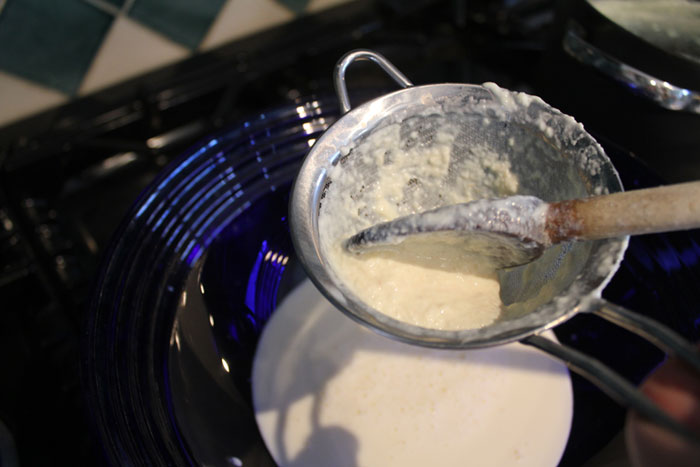 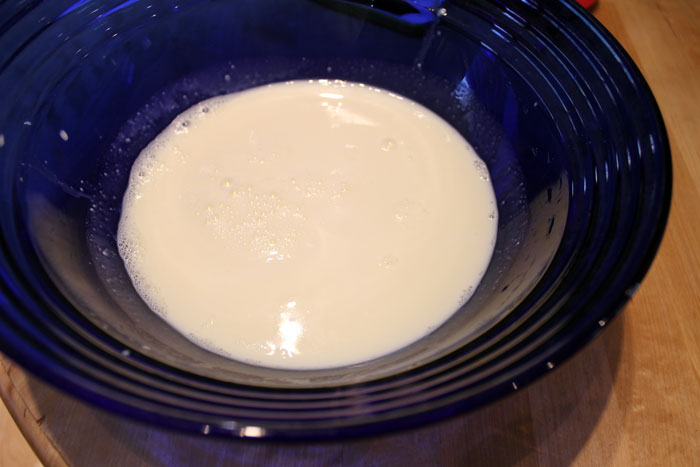 PROs: Great flavor; easier to gauge and pull off the heat at just the right moment.

CON: Sloooooooow—but soothing in its monotony, especially if you’ve got other stuff to do in the kitchen while you wait. 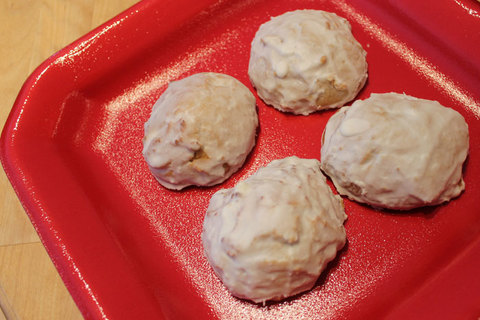 YOU’VE GOT EVAPORATED MILK. NOW WHAT?

» It's a choose your own adventure! You can use your evaporated milk in a recipe, like pumpkin pie. Still on pumpkin overload from Thanksgiving, I went looking for other possibilities and found these marshmallows, this tikka masala sauce, a bunch of takes on sugar cream pie, and these throwback cookies from Good Housekeeping. I went the cookie route—more like scones, actually—and gave them to my neighbors as holiday treats (pictured at left).

» Or you can use your evaporated milk to make sweetened condensed milk. Twice as HOMEGROWN!

Have evaporation experience? A thought to share? Post it below and keep the conversation rolling! If you’re trolling for baking projects, you might give Anne’s Cronut 101, Black Cat Cottage’s Homemade Extracts 101, or Rachel’s Sourdough Starter 101 a gander. If you’d like to learn more about where your food comes from, don’t miss the Food Labeling 101. You can always find more things to cook, preserve, make, craft, plant, grow, and simmer in the HOMEGROWN 101 Library.