The following 101, a recipe for mole poblano, comes from HOMEGROWN's flock tender, Jennifer, who would voluntarily eat mole every day for the rest of her life. 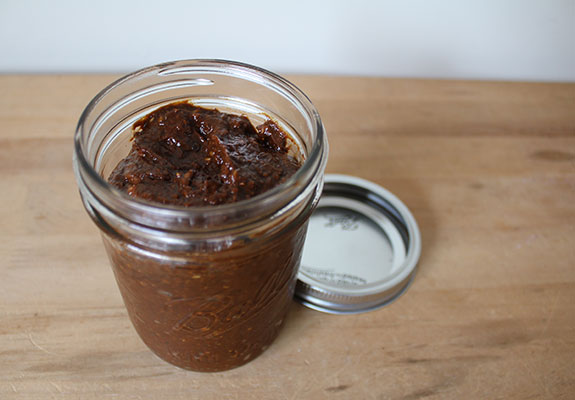 My awesome-sauce sister-in-law, an ex-professional chef whose dad grew up in Mexico City, made a mole verde for dinner one night back in the spring, when I was visiting her in Florida. The layering of flavors, the richness, the depth: in a word, yum. In between bites and humble deflections of praise, she swore up and down that mole—the catch-all term, pronounced MOE-lay, for a wide range of Mexican sauces involving chile peppers—isn't hard to make. Most versions just require a ton of ingredients and an equal amount of patience. 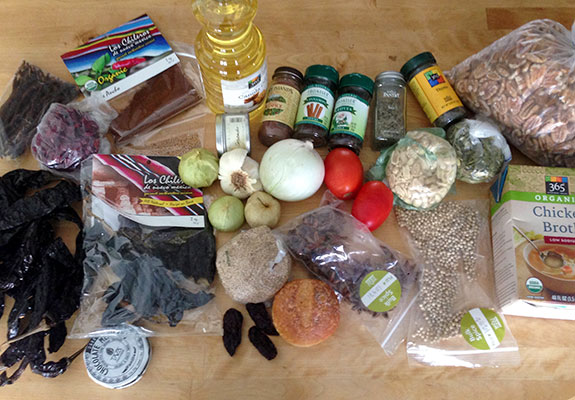 Turns out, she’s right. I took a stab at making mole poblano recently, and it was a cinch, once the shopping and the chopping were over. It was even vegan, since I used dairy-free chocolate. I borrowed a recipe from Pati Jinich, of the TV show “Pati’s Mexican Table,” which she in turn had adapted from the 17th century Dominican nun Sor Andrea de la Asunción, of the Convent of Santa Rosa. (For the record, there are no fresh poblano peppers in mole poblano, although there are dried poblanos, known as anchos. The dish's name comes from its origin in the Mexican city and state of Puebla. “Poblano” and “poblana” are the adjective forms of “Puebla.”)

I had been shooting for full authenticity, but once I had the idea to substitute cranberries in place of raisins, which are fruit non grata in my household, I cut myself some slack and made a few more tweaks to suit my own taste. I’ve noted those aberrations from the original recipe below. I ended up with an amazingly complex, intensely mouth-watering sauce that I ate the next day in chilaquiles, with tons left over to give away and to save. 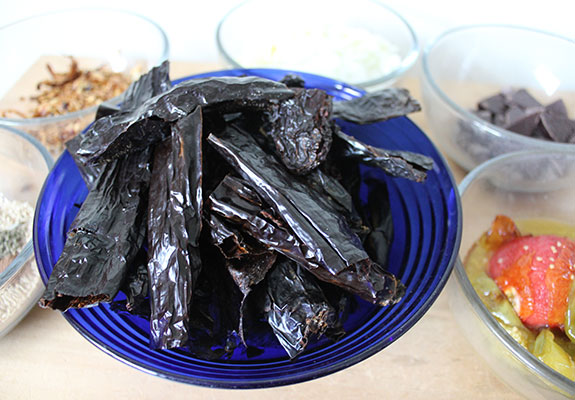 In fact, the very night I made the mole, I took some to my neighbors, who were hosting a dinner party. I was Yom Kippur, and the menu included everything from stuffed cabbage to angel food cake topped with backyard raspberries. I couldn’t help but make a mental toast to the culture-crossing power of food. Holy mole, indeed. 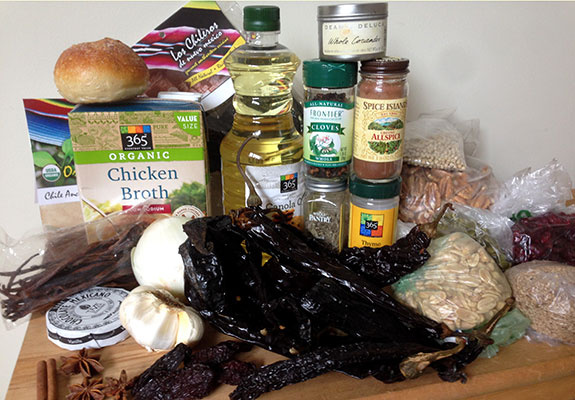 » 12 pasilla chiles, stemmed and seeded (Save the seeds!)

» 2 Tbsp powdered ancho chile (Full disclosure: This is what I used because it’s what the market had in stock. The recipe called for 6 anchos, stemmed and seeded, with the seeds reserved.)

» 3 Tbsp pecans, roughly chopped (The recipe called for almonds, but pecans are my go-to.)

» 3 Tbsp dried cranberries (Ditto above; the recipe called for raisins.)

» ½ cup reserved chile seeds (I used pretty much all of the seeds I removed from the peppers.)

» ¼ tsp star anise seeds from pods (The recipe called for regular anise, but I had star anise in my spice drawer.)

» ½ tsp whole peppercorns (I used white since that’s what I had, but for sticklers, the recipe called for black.)

» 2 corn tortillas, cut into wedges (Make your own tortillas!)

» ½ bolillo or telera roll or 2 oz of baguette, sliced (Day-old is even better! Cynthia shares more ways to use stale bread.)

» 6 oz Mexican or bittersweet chocolate (Out of thriftiness, I supplemented fancy Mexican chocolate with organic morsels.)

» 5 cups chicken or veggie broth, plus more before serving (Make your own stock!)

Unlike the laundry list above, this one's simple: All you really need are a good knife, a cutting board, a large stockpot with a lid, a wooden spoon, tongs or a slotted spoon, a blender or a food processor, and a bunch of bowls to keep things tidy.

1. Preheat the oven to 400F. Husk the tomatillos then wash them and the tomatoes. Drizzle them with 1 or 2 Tbsp veggie oil and roast them in a baking dish for 30 to 40 minutes. Remove and set aside to cool. 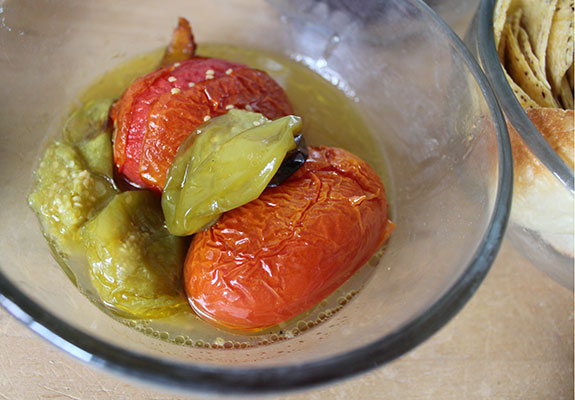 2. Meanwhile, start prepping the rest of your ingredients, beginning with the chiles. These you want to stem and seed. (Remember: Reserve the seeds!) Dried chiles are much easier to seed than fresh chiles. I split them open with a knife and ran my thumb down the insides, and the seeds tumbled out. If you go this route, you might want to wear food-safe gloves or at the very least wash your hands THOROUGHLY once you’re done. Then wash them again—especially before touching any body parts and doubly especially before your fingers go anywhere near your eyes. 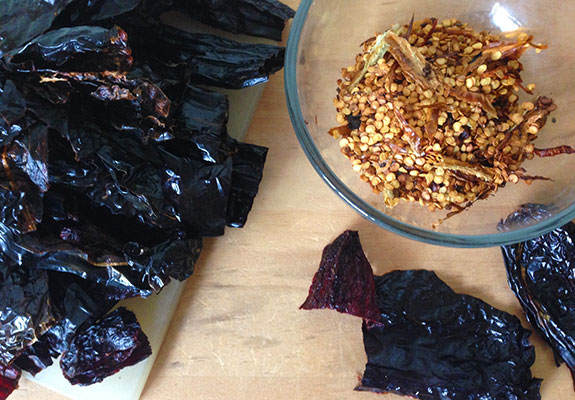 3. Once you’ve prepped the chiles, I recommend assembling the rest of the ingredients in separate bowls: chopped onion and garlic, nuts and berries, seeds and spices, tortillas and bread, chocolate, plus those chile seeds, as well as the roasted tomatoes and tomatillos. This is what the French and culinary students everywhere call mise en place, but in the process of making mole, I learned the Mexican phrase for it: estate libro—literally, “ready state,” which now you are! The hard work is done. From here on out, things move quickly. 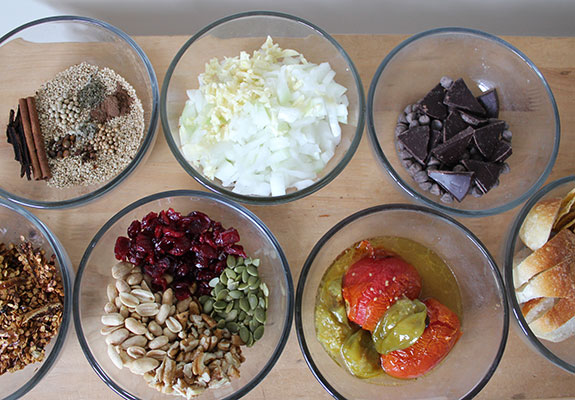 4. Put ½ cup oil in a large stockpot over medium-high and give it 2 or 3 minutes to get hot. Working in a couple of batches, add the chiles and sauté for 5 minutes or so, stirring often. (This is when I started to drool. The fragrance of chiles in hot oil is intoxicating.) Remove the chiles with tongs and set them aside. 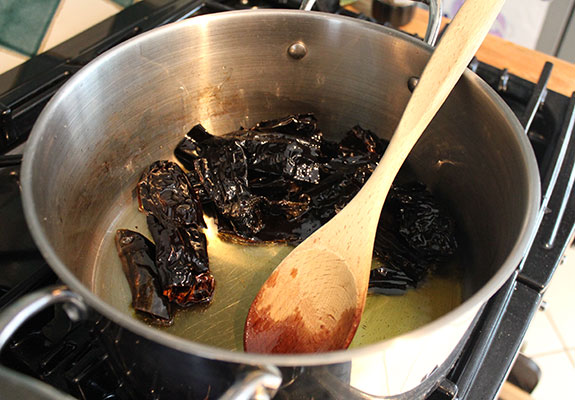 5. Dump the onion and garlic into the pot and sauté for about 3 minutes, stirring often. 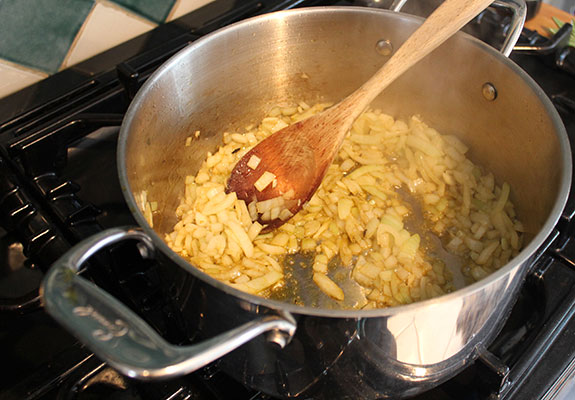 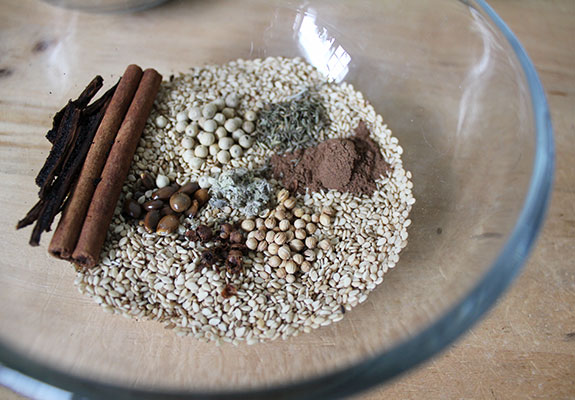 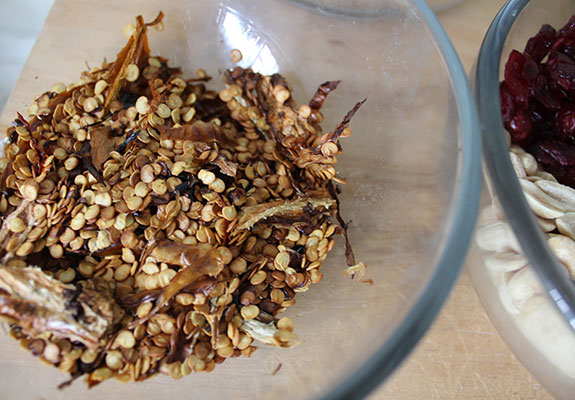 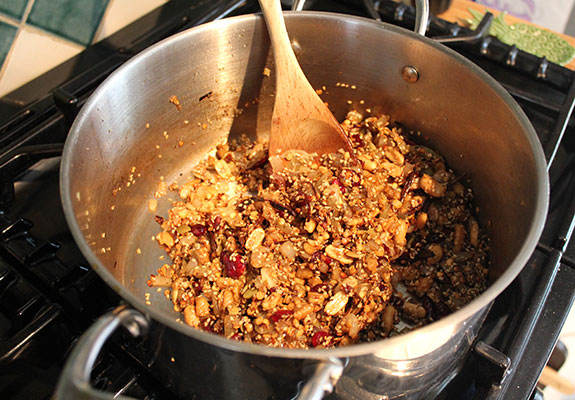 8. Scrape the mixture toward the periphery of the pot, creating some space so the next batch of ingredients can come in direct contact with the pot's hot bottom (woot! hot bottom!) then add the four T's: telera roll (or whatever bread you're using), tortillas, tomatoes, and tomatillos. Cook, stirring frequently, for 3 minutes more, letting the ingredients get friendly. 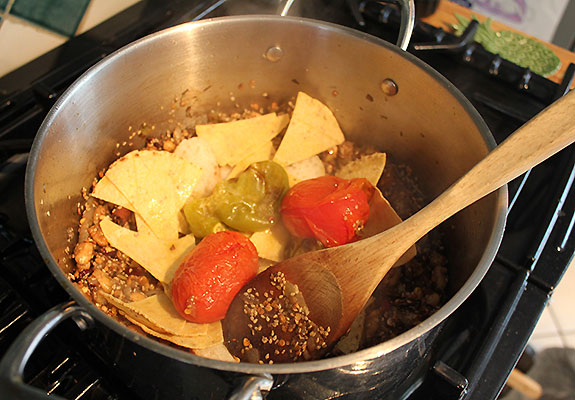 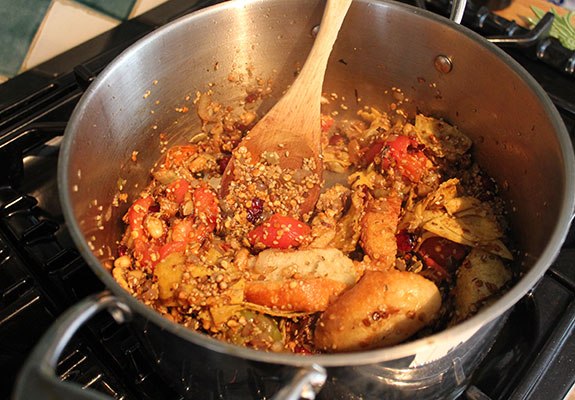 9. Dump in the sautéed chiles and 5 cups broth. Mix well and let the pot come to a simmer. 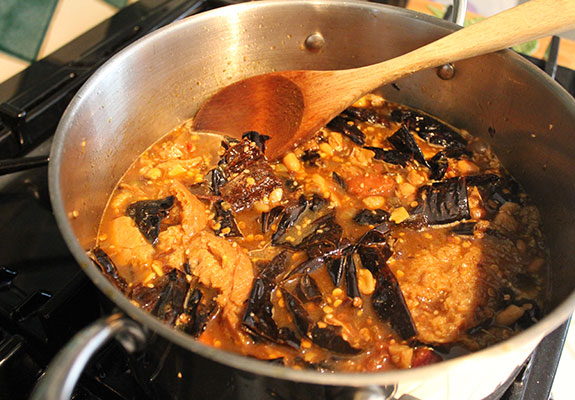 10. Now add the chocolate and salt. (I used a chocolate that's manufactured a five-minute walk from HOMEGROWN HQ. Gotta love those labels!) Stir it like you mean it. 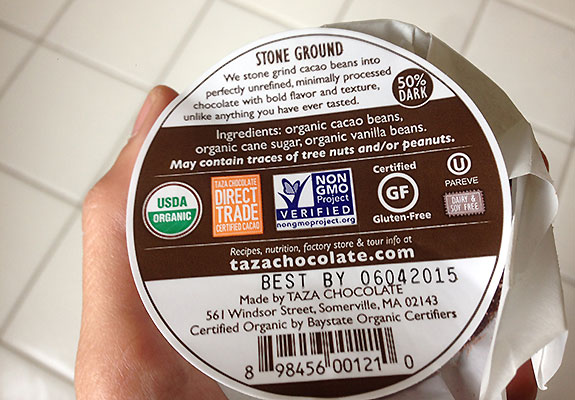 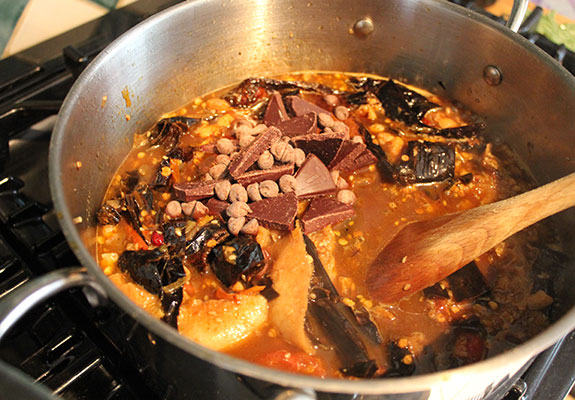 11. Now step back and let the whole shebang simmer for about 15 minutes, stirring once or twice. In the photos below, you can really tell the difference between the beginning of the simmer and the end, when the ingredients have broken down. 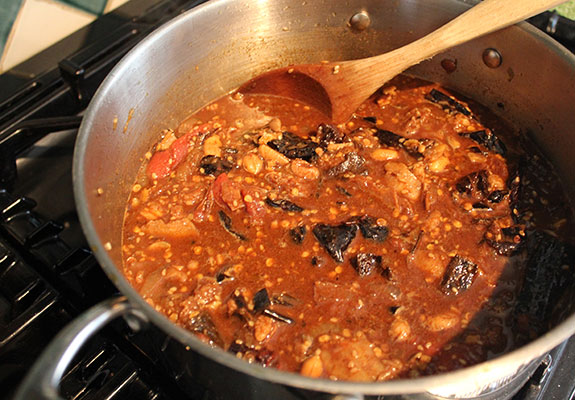 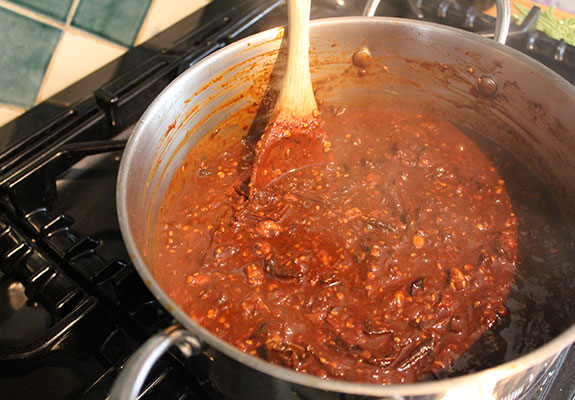 12. At the end of the simmer, remove the pot from heat, cover it, and let it rest for 30 minutes. 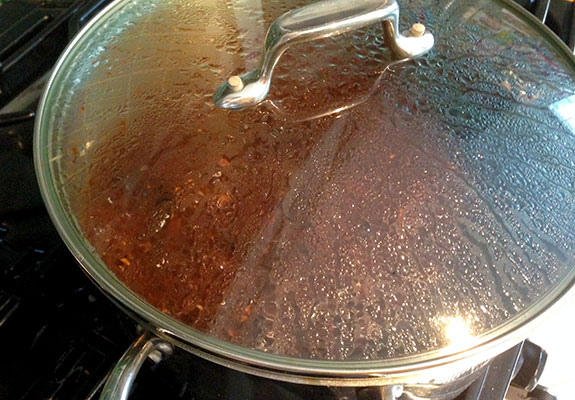 13. Uncover the pot and let the mix come to roomish temp. Working in batches, transfer the mole to a food processor or blender and purée until smooth. Vale! You’ve got mole—or, rather, mole concentrate. This will keep in the fridge, covered, for up to a month, or you can freeze it for a year. 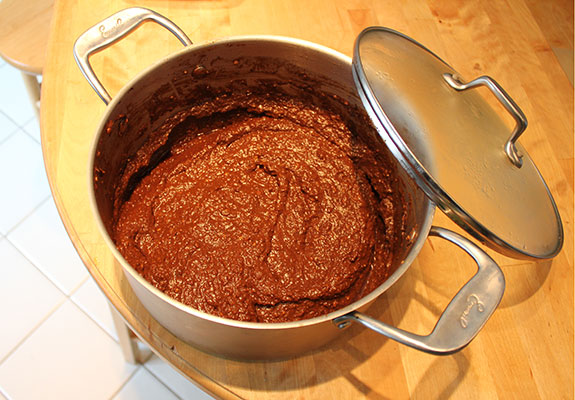 14. When you’re ready to cook with your mole, dilute it at a ratio of 2 parts mole to 1 part stock; for example, 1 cup mole with ½ cup stock. Heat that combo in a saucepan until warm then serve over chicken, lamb, fish, roasted veggies, enchiladas, chilaquiles (see below)—whatever. Pretty much everything is better with mole. Garnish with sesame seeds. Buen provecho! 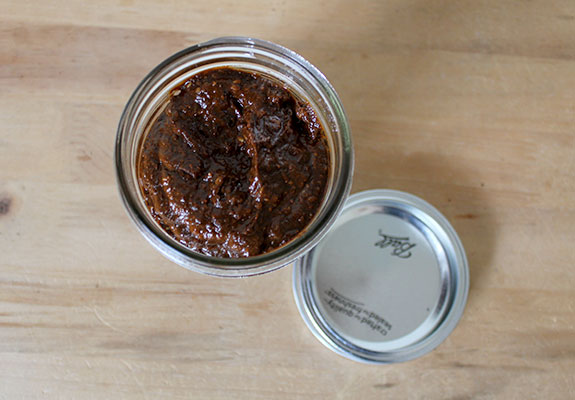 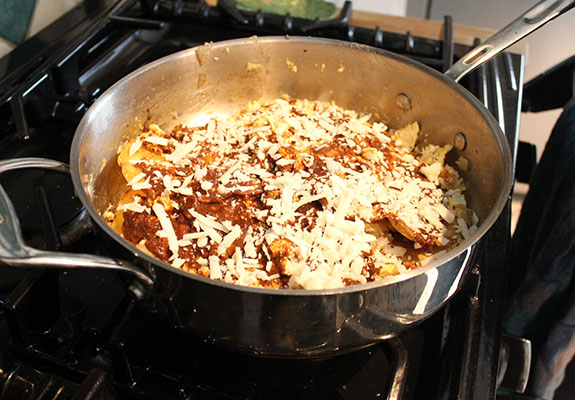 Got another mole recipe or a serving suggestion? Post your comments below and keep the convo rolling! Chile pepper fanatics should check out 101s on how to dry hot peppers and make fermented chile paste. And if you’ve got a hankering for more homemade Mexican food, you might give the 101s on making tortillas, tamales, and horchata a gander. You can always find more things to cook, preserve, plant, grow, make, craft, and simmer in the HOMEGROWN 101 library.

Thanks Jennifer. This looks great. I'm glad you said it's concentrate which to me means that the amount of work on the upstart can be realized many times over in different ways. I grew up with a lot of mexican friends, girlfriends and 1 wife so I have tasted so many great mexican dishes. I made mole from scratch once with a recipe I got somewhere online. It came out ok... not really writing home fodder though ;^#. Your recipe sounds awesome. I can't wait to try it. It must be pretty spicey with all those chile seeds. YUM!!! I'm glad you mentioned the other dishes in the 101 library. I'll be sure to check those out as well. Thanks again Jen. Chuck.

Chuck: You're very welcome! It's actually pretty minimally spicy, since none of those peppers are especially hot. I just used up the last plastic bag I had frozen over the weekend, and I'm already planning to make more. It's that good—and it is really easy to store. I kept some in the fridge for 1 month, divided some up into 1/2 cup portions to freeze, and gave some away to friends. The recipe above definitely makes enough for, oh, at least 6 or 7 different meals feeding multiple people each. If you try it, let us know how it turns out!

All these great pictures make me hungry. I actually like spicy foods. I'm going to post a recipe for a very spicy... I'm going to call it a salsa, it's more like a paste, dried New Mexico chiles, garlic, etc. and a bit of mustard makes it but it could burn your face off.But very tasty. Thanks. Chuck.