The following 101, on building a multibin composter, comes from HOMEGROWN member Joshua, a Washington Stater who is turning his backyard into “a mini food forest.” (Pretty cool, right? Learn more in Meet Your Neighbors.) Thanks so much, Joshua, and please keep hammering out the good ideas! 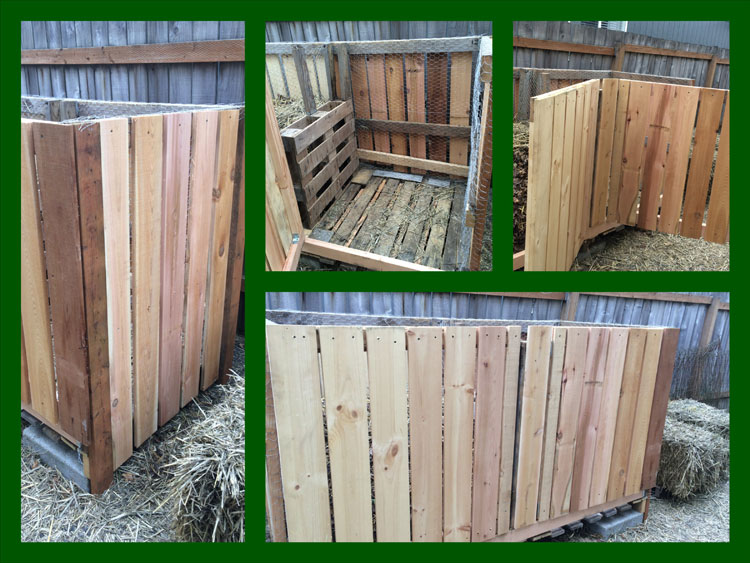 Everyone knows at least one person with an amazing green thumb, someone who can grow anything with graceful ease. And then there are those of us who see keeping a houseplant alive as a deep mystery of the natural world. My skill with growing—and, for that matter, keeping plants alive—could only have been described as the latter. So I set out to change that.

I dove into hours of reading and researching, converted a third of my backyard into raised-bed gardens, and began my journey from killing even the hardiest of houseplants to providing some of the food my family eats. As with most new gardeners, I experienced both successes and opportunities to learn and grow.

After establishing my garden, I quickly discovered I had far more organic waste than I had prepared for. In my infinite knowledge as a new gardener, I thought the fairly large compost tumbler I had purchased would be sufficient. But as my garden rapidly outgrew the tumbler, I realized I needed another solution and turned to the all-powerful Google for help. A quick search returned a plethora of ideas. Given that my woodworking skills fell one notch below my ability to keep plants alive, I wanted to keep the project as simple and inexpensive as possible.

Here I entered the wonderful world of working with pallets. I found a straightforward multi-bin composter concept that I liked, took an inventory of the wood I already had, rounded up a few pallets, loaded a new playlist, and got started.

Note: Most of the wood, brackets, screws, and hinges I used were items I had on hand. I’m sure better options exist; I just used what was taking up space. The pallets I used as the floor were 38 ½” x 41 ½” and the one I used as a divider was 30” x 35” x 6”. Pallets can range in length, width, and height, so please keep in mind that the corresponding cut list and measurements below were based on these dimensions. I have yet to put together a lid, so that’s not accounted for in the plans below. 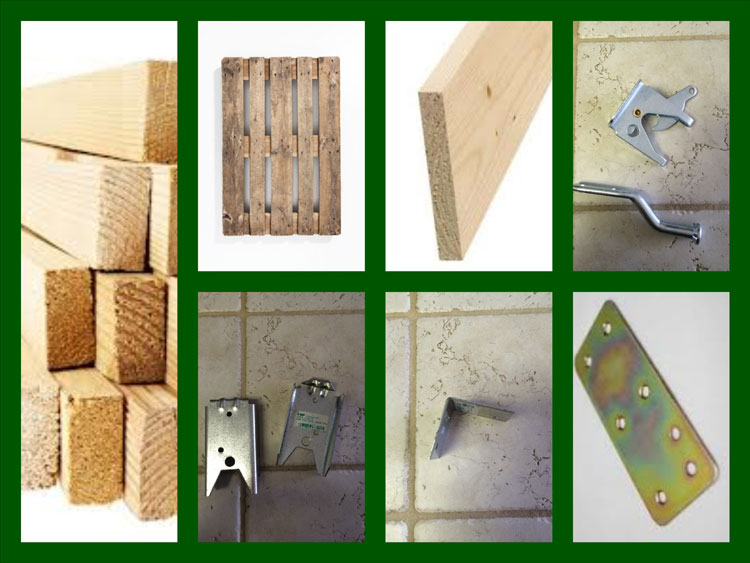 » 3 – pallets of the same dimensions 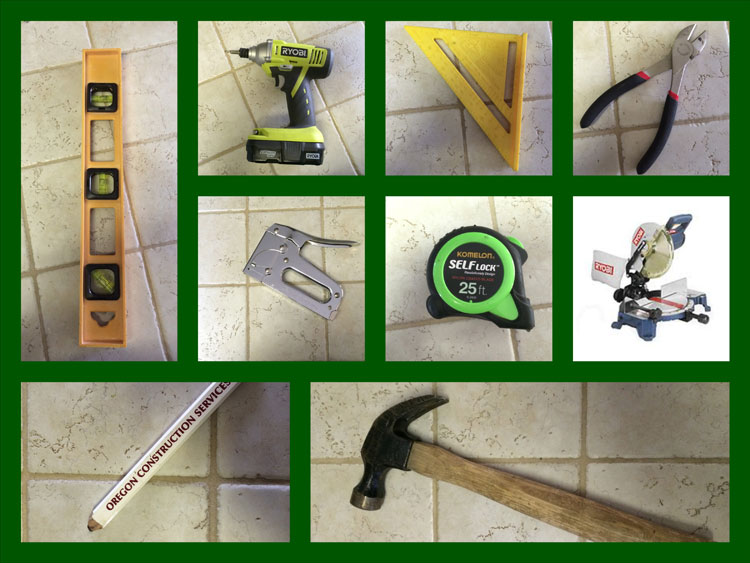 1. Screw your three pallets together using 2 ½” screws to create an upside down T. Using two screws, one in front one in back, secure the face and the back of each pallet lying flat on the ground to the pallet standing upright. The gaps in the pallets were too wide for my taste, so I cut down strips of wood (1” wide) to close them up. Completely optional.

2. Commit to the spot where your composter will live. Lay down the six bricks so that each corner of the composter and the upright pallet are supported and sitting off the ground. Place the pallets on the bricks. One tip: If you have old roofing shingles on hand, laying those down on the bricks before putting down the wooden pallets will keep the wood from rotting as quickly.

3. Now build the sides by screwing together the legs (53 ½”) and the supports (40” pieces). The cross supports should be screwed to what will become the inside of the legs. In total, each side should have two legs and three cross supports creating a squatty and wide-looking ladder. Each intersection between leg and cross support will use two 2 ½” screws.

4. Next you’ll begin to construct the frame. Join together the back (84” pieces) and the newly constructed sides by screwing the tie fence brackets into the cross support (1 ¼” screws) of the sidepiece aligning with the three cross supports. Then place each of the three back pieces into the tie brackets and secure them with one 1 ¼” screw on each side of the back piece. Attach the frame to the pallets in each corner with one 2 ½” screw in each side of the corner.

5. With the frame constructed and secured to the pallets, you’re ready to cut some chicken wire to fit inside each bin. I found it easiest to run one single piece along all three sides in the bin. The piece is already 48” wide, which is perfect for the height of the bin. I cut two pieces 9’ long.

6. Staple the chicken wire to the legs, cross supports, back, and floor until the wire is secure and feels taught. I don’t recall the number of staples used, but I went through roughly a quarter of a box while completing the bin. (That's a side view, at right.)

7. Take the fourth 84” piece of 2x4 and connect it to the front of the composter at the bottom. Make sure it’s flush with the rest of the frame in order to provide a solid doorstop and to minimize any materials escaping when the doors are opened. Secure one tie bracket on each end of the frame, screwing it in with two 1 ¼” screws. Then secure the 84” piece into the tie bracket with two 1 ¼” screws.

8. Now construct the doors by laying out the pieces measuring 37” (top and bottom) and 34 ½” (sides), with the sides on the inside of the top and bottom making a square. Screw an “L” bracket into each corner using two 1 ¼” screws for each side. Once all of the “L” brackets have been screwed in, drive one 2 ½” screw at an angle into the end of the doorframe from the outside of the door on each corner. The door should now have a solid feel to it and is ready for hinges.

9. I attached both doors at the center of the composter, as that was the best for my layout. Since my dividing pallet wasn’t wide enough, I had to make accommodations. Using the piece of 2x6 (43 ½”) and two pieces of 2x4 (39”) long, you’ll want to make an L-shaped support, which should be flush at the top. Screw in the 2x6, with one 2 ½” screw going into the bottom of the pallet, one from outside the doorstop (2x4), and one at ¾ into the pallet. Use the two 3” metal brackets and 1 ¼” screws with the 39” pieces to make one solid piece. Place the metal plates, one at the top and one at the bottom. Then attach the 2x4 to the 2x6 with three more 2 ½” screws: one in the bottom at an angle into the doorstop and two into the sides of the 2x6. (See photos.)

10. Attach the doors to the L-shaped support with screws provided in your hinge package.

11. Finally, take the fencing slats and, using 1 ¼” decking screws, attach each board: two screws in the top and two in the bottom. I did have to cut one 42” fencing slat in half lengthwise to place next to the hinge side of the door. Attach the gate latches where you please.

» The YouTube video below, posted by Vegipower, served as the foundational concept for my bins.

» I also like this video, from wbhomesteader, on how to make a composter without power tools.

» The video below, from YouTube's Urban Farmer channel, shares a very simple single-bin composter that I used as inspiration. I chose not to use this exact design only because I had a fair amount of extra wood to put to use and I wanted a bit more of a finished look.

» And here’s a downloadable PDF from “The Green Man” on composting with pallets.

Got a question for Joshua? Want to share photos of your own multibin setup or a link to more blueprints? Post any and all below and keep the conversation rolling! For more on composting, check out this introduction, Jessi's 1o1 on turning a trash can into a composter, and this 101 on brewing compost tea. If you've got extra pallets on hand, you might be interested in Lauren's Duck House 101. And for another type of composter, check out Joan's plans for what to do with dog poop. You can always find more things to make, craft, cook, preserve, plant, grow, and staple in the HOMEGROWN 101 Library.