The following 101, on building an outdoor dining table (using leftover wood from raised beds, no less), comes courtesy of HOMEGROWN member Lisa, of Elgin, Illinois. Before you balk at the idea of DIY carpentry, take heart: This table was Lisa’s first stab at furniture building and it’s a beauty—not to mention way cheaper than pricey catalog alternatives. Can’t you just picture the summer dinner parties? Thanks so much, Lisa, and please keep hammering out those good ideas! 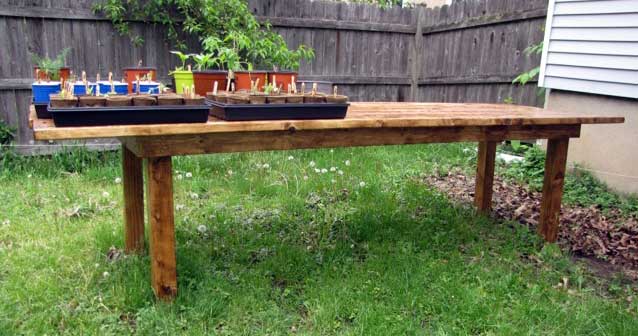 Ask me what I think of patio furniture and I’ll tell you that most of it is unattractive and overpriced. For close to a year, I researched patio sets in various shapes, sizes, and materials, and what I learned is that, if you want to seat more than six people, you’re going to shell out a sizable sum of money. I was also amazed at how many sets include a glass-topped table. Outdoor glass-topped tables make as much sense to me as glass shower doors or sleeveless turtlenecks. Frustrated, I began to consider the possibility of making a table myself.

I come from a family of four. My fiancé comes from a family of five. Each of our siblings (three, combined) has a significant other, as well as two children apiece. How often the entire family will come together and break bread is not the point, but having the option to seat all of the adults together, at least, is important to us. Buying a patio set to accommodate 12 would have been a hefty investment and not one that I felt was necessary.

How difficult could it be to build a table? For me, functionality was most important, followed by size, strength, and cost. As for materials, wood is easy to come by and simple enough to work with, and its patterned grain and rustic charm appealed to us.

I tore a few pictures of plank-style wooden tables from 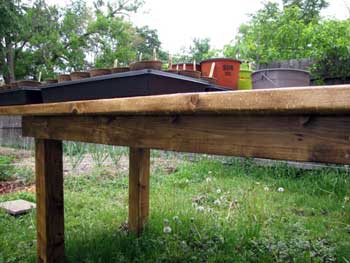 magazines for inspiration. Then one afternoon, while organizing a few things in the garage, two 2x8x10s caught my eye—extra planks from the raised garden bed frames I had built the previous summer. Perfect, I thought. Those could serve as two planks in the tabletop—and as the final motivation I needed to start building the table I had been assembling in my mind.

Even though I had never built anything more complex than a box (i.e., those raised beds), I felt completely confident that I could handle building a rectangle with legs, support crossbeams, and a top. Watching a couple of videos on YouTube confirmed my plan was on the right track. In other words, don’t be scared. Keep reading.

This build works best with two people. While one person hammers the frame and crossbeams together, the second person should stand on the opposite side and help steady the frame so that it doesn’t slide with each hammer strike. A tip: Have your helper place a length of wood between the frame and his or her foot or hand to help absorb the force of each strike.

2. Lay two 2x4x8s on your workbench or garage floor, 2” side down. At either end, nail two of the 26” length 2x4s to form a rectangle. Nail the ends inside the longer lengths. You should still be able to see the ends of the 2x8s, but the ends of the 2x4s will be flush against the 2x8s and not visible. 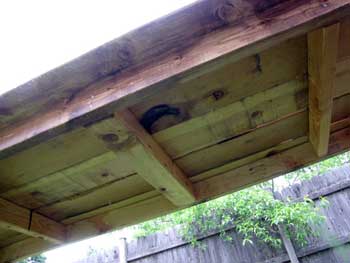 supporting crossbeam to the frame. In the center of the rectangle, attach a 26” 4x4 crossbeam. (The photo at right was taken after the table was fully assembled, so the top is already attached, but you can see the crossbeams underneath.)

4. Next attach the legs to each inside corner of the frame. When done, you should have a frame with a total of three crossbeams and four legs. You’re now ready to flip the frame over onto its legs and attach the tabletop planks. The length of the planks compared to the length of the frame will leave an overhang of nearly 11 inches at each end—in other words, no knees bumping the frame. Hooray! Also, both sides of the table will have a nearly 4” overhang. 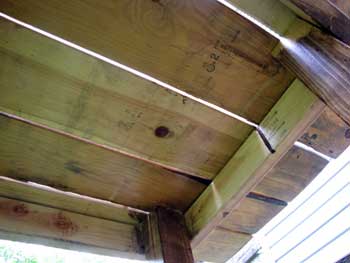 5. Set the five 2x8 planks on top of the frame and adjust them so they’re where you want them. For our table, I flipped the planks over to see what side of each plank had the most interesting grain pattern and paid attention to how the planks laid together, side by side, too. The overall length of 2x8x10s will vary slightly from plank to plank. We chose to leave that variation as it was, so that each end of the table wasn’t perfectly even.

6. Once you’ve arranged the planks in a way you like and the planks are evenly spaced on the frame, remove all but the center plank from the frame and set them aside, noting their order. Next you’ll want to nail the center plank to the frame. Begin by driving a nail roughly 1” from either side of the plank into the center 4x4 crossbeam. The person helping you can assist by holding the plank steady until the nail marries the two pieces of wood together. Nail the other side of the plank to the center crossbeam; again, roughly 1” from the side. Continue to secure the first plank to the remaining crossbeams and to the sides of the frame.

7. Repeating the method above, add one tabletop plank at a time, securing each plank to the crossbeams and to the frame. You should end up with two nails per plank at each crossbeam and frame end. You can add additional nails, if you like. A note: We didn’t take any precaution to protect the wood from missed hammer strikes—and trust me, there were several misses. The resulting dents didn’t concern me because they added character and made a statement: This was handmade. 8. Using an orbital sander, sand the tabletop to a smooth finish to help prevent any splinters. I began with coarse-grain sandpaper (60 grit) and graduated to fine (120 grit), very fine (220 grit), and, finally, superfine (320 grit). While sanding, I took care to sand the tabletop and the underside of each overhang, and I also added a slight rounding to each edge of the table top (top and underside of the planks) and the ends of the planks at each head of the table, too. I sanded smooth any surface a hand could touch while seated at the table or while moving it. I gave the table legs a little attention, as well. If you don’t own an orbital sander and don’t want to buy one, you might ask if your local hardware store rents them.

9. Once sanding was complete, it was time to stain and waterproof, followed by two light coats of satin polyurethane. Although we didn’t stain the underside of the 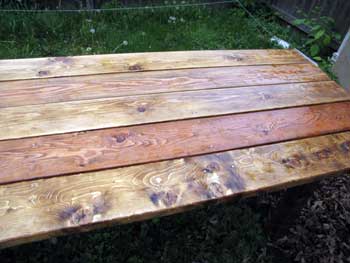 table, we did coat it with waterproofing (we used Thompson’s WaterSeal Waterproofer Plus Clear Wood Protector and MinWax Clear Satin Polyurethane). For the stain, we applied two coats of MinWax Golden Oak with a cotton rag. Wear gloves!

A couple of notes: I took these photos in May 2013. We built the table in July 2012 then stored it outside during the winter, fully wrapped in a tarp. (We also shimmed the legs to help the table rest level throughout the cold winter months.) The two planks that appear more orange in tone are the leftover wood from the raised beds. They sat in our garage, aging for a year, before we used them in the tabletop. We bought the three golden-toned planks new and used them immediately. I didn’t include additional supports for the legs when I build the table last summer but I plan to add those this year: a 4x4 crossbeam between the legs at each end of the table, at middle height.

Go on! Build yourself an alfresco table. I’m not a carpenter and had no previous experience with table building but managed to create a rather sturdy and attractive table that can seat 12. The total cost to construct this table was about $120, including the purchase of an orbital sander ($20 on clearance!) and a gallon of waterproofing ($18). We didn’t even come close to using the entire gallon, but I plan to build a second table, and a friend has already put in a request for another.

Got a question for Lisa? Or another set of table blueprints to share? Post a comment below and keep the conversation rolling. If you’re looking for something to put on that table, check out HOMEGROWN’s Find Good Food page then troll through the CSA Cookoff recipe file. If you’re feeling especially handy, you might be interested in the Homemade Tabletop Fire Bowls 101 or the Outdoor Earth Oven Building 101. And you can always find more things to make, craft, plant, grow, cook, preserve, and hammer in the HOMEGROWN 101 library.

Lisa - Your table is absolutely gorgeous. If I only saw a picture of it and wasn't "in the know" as a member of homegrown that you made this from left over raised bed wood ... I would have thought it came from One Kings Lane Vintage Decor for a hefty price tag. Congrats on such a work of art.

Excellent description in the clearly laid out steps.  What a beautiful table!  How rewarding it must be to dine at and work from!  It looks so sturdy, perhaps you won't need the cross beam.  Will it be high enough not to be a nuisance to those lucky folks at the head of the table?

Thanks, all!  Yes, the table functions quite nicely as a potting table.  I look forward to putting it to use for all sorts of things.

As for the extra crossbeam for the legs, the overhang at each head should ensure that the crossbeams won't cause conflict with anyone's knees, but I'll make sure their placement guarantees that won't be an issue.  Once the crossbeams are in place, I'll post a photo.  Thanks, again!