The following 101 on rendering lard comes from HOMEGROWN member Mary Elizabeth, a Georgia gal who describes herself as a “registered nurse by day; aspiring homesteader by evening, night, and weekend.” Thanks, ME, and please keep the good ideas flowing! 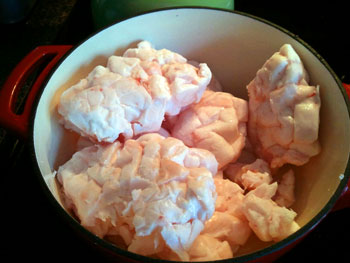 What is leaf lard, you ask? Leaf lard is the visceral fat surrounding a pig’s kidneys. (That's it over there, in the photo to the left. Pretty, huh?) A soft fat, it’s considered more delicate than some fats and, once rendered, lends itself to baking and pastries. Fatback? Well, that’s the fat on the back of a pig, just above the back-strap muscles. Fatback is a firmer fat but ultimately will give you a similar finished product to the leaf lard. I haven't rendered fatback before, but from my research, it seems people use leaf lard and fatback interchangeably. (If you’re a fatback expert, don’t be shy: Help fill us in by posting in the comments box below.)

I do think fatback is more readily available, especially if you live in the South. Leaf lard, on the other hand, is primarily available by request; it usually gets discarded along with the intestines. That said, my sister and I were able to get 10 pounds of leaf lard for free when we ordered a quarter pig to split. In other words, it’s well worth asking your local meat people if you can have their leftover leaf lard or if you can purchase it for a small fee. Offer to render a few jars of lard for them and see if that doesn’t convince them! Either way, once you’ve got your fat, you can render it into lard for use in all kinds of cooking projects. Details below. » about 5 lb leaf lard or fatback

» spoon or spatula for stirring

Take your leaf lard or fatback and chop it into small chunks, approximately 1 inch in size. There's no need to get out the measuring tape, but you do want to make sure the lard is very cold—as in, put it in the freezer for a few minutes beforehand. Cold fat makes cutting much easier. And be sure to use a very sharp knife. I've read that you can use the food processor for this step, which would make things go more quickly. Lucky me, the wonderful people I buy my lard from have their processor cube it. I just love them.

Once the lard is in small pieces, place it in your pot and add about an inch of water. Don't worry: The water will evaporate during the cooking process. It's just there to prevent sticking. Heat on low and stir occasionally. The objective is to cook on low over a long period of time—a.k.a. “low and slow”—to render the most fat and prevent burning. When the fat is rendered over low heat, you avoid the lard taking on a "piggy" smell and taste. Warning: your house will have a piggy smell while the lard is rendering down, so don't plan a dinner party for later that evening. 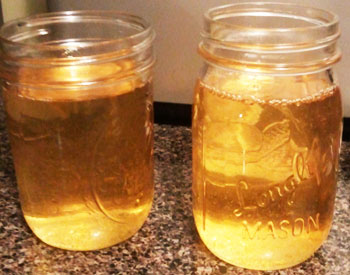 As the lard renders from the connective tissue, it will separate into liquids and solids, a.k.a. “cracklins.” The photo above right depicts the process about halfway through. When the lard is done rendering, the cracklins will sink to the bottom of the pot. This usually takes three to four hours. At this point, you can decide how patient you are and whether you want to render every last drop of fat from the cracklins.

If you’ve had enough fun, go ahead and strain the contents through a fine-mesh strainer. I mostly use my lard for baking, so I like to strain it a second time through a cheesecloth-lined strainer, removing the smaller particles, but if you’re using the lard for savory purposes, you can eliminate that step.

Ladle your lard into storage containers—I prefer wide-mouth pint jars—and let cool. The lard stores in the fridge for about a month and in the freezer for about six months.

HOW TO USE YOUR LARD: THE BEST PIECRUST YOU’LL EVER EAT

Once your lard is ready to go, you can use it in cornbread (my personal favorite) and as a one-to-one substitute in any recipe that calls for vegetable shortening (pastry, biscuits, et cetera). Rendered lard remains stable at very high temperatures, so it’s also safe to sauté. And for a great and easy piecrust recipe, I recommend the following, adapted from The Pioneer Woman. 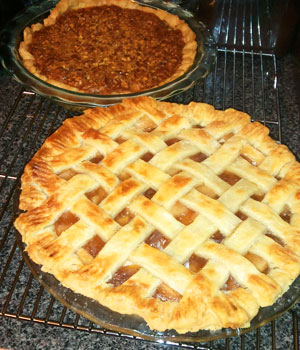 Mix together flour and salt in a large bowl. Using a pastry blender, cut in butter and lard until mixture resembles small crumbs. Add egg and vinegar. Continue mixing with pastry blender. Add water 1 Tbsp at a time until well mixed. Dough will be wetter than average piecrust. Divide dough into 2 to 3 portions and flatten into discs approximately ½-inch thick. Wrap each disc in plastic wrap and place in storage bags in freezer. Chill 15 to 20 minutes if using immediately or keep in freezer until needed. Stores well for 3 to 6 months. Thaw on counter for 15 minutes before use. Enjoy!

SPEAK UP!
Got another use for rendered lard? Or a question for Mary Elizabeth? Post it below and keep the conversation rolling. You might also be interested in 101s on butter making and canning chicken stock. For more ways to use your lard, you might consider joining the Recipe Sharing group. And you can always find more things to cook, preserve, plant, grow, make, craft and render in the HOMEGROWN 101 library.

Love this :) I do it to make soap and  get my fat from a local farmer! I prefer the leaf fat to the other cuts cus it renders much faster .

I have a 20 pound box of ground lard to render today.  It is a combination of leaf and back fat.  Pie crust not made with lard really isn't pie crust...

Hey, Kevin: How did it go? And even more importantly, what kind of pie did you make?

I raise pigs on our multispecies grazing farm.   We don't usually get much leaf lard from our pigs.  I've wondered if it is because they usually aren't huge pigs- 200 pound hanging wt.  I use the leaf lard as much as the fat back.  Leaf lard certainly renders faster and might have a slightly less odor to it.   So many people just ignore back fat, what a waste literally!!!!

A pie crust is NOT a pie crust without lard and butter.  Crisco is nasty stuff.    When I fry anything which isn't a regular thing at all- I use lard.  The flavor just is outstanding.  Plus for us and our customers it is  a sustainable product.  No shipped in olive oil (of dubious quality or freshness), peanut oil, crisco (ewww) or whatever.

I'm also started making soap with our lard and beef tallow.  AWESOME stuff - and longer lasting than the other vegetarian versions!

Blueberry pie from last years blueberries (frozen for cruddy February and March pie days) is on the menu this week.

Bought half a hog yesterday. Rendering lard today. Saw in Foxfire Book #1, pg 207, "Add soda if you don't want many cracklin's. Soda also keeps it from smelling while cooking and from tasting strong." Any truth to this? If so, how much soda do you use?

This is interesting, a thought just occurred to me Where I live (in China) shortening of any type is not easy to come by. I suspect it has something to do with that most Chinese homes have no ovens, therefore this five thousand year old culture has not experienced buttermilk biscuits!

Unless we travel to Shanghai, where we will part with a significant part of my hard earned cash to acquire genuine Crisco at the stores that cater to expats. We can only get cooking oil, any conceivable type of cooking oil; corn, soy, sunflower, fish, multigrain or canola.

What has come to mind is that I can pick up fresh pork at the open air market and instead of have the butcher remove the skin and fat I can render this into lard in our crock pot. Thanks Homegrown!

I talked to a Mennonite woman and asked her why my first batchof lard had developed some mold on the top.  She laughed and said that everyone does that the first time.  When you begin to heat the lard, add 1 TBsp of baking soda; this will extend the shelf life and make your lard extra white (apparently a very important feature).  Also, she said to make sure the lard is heated to 225 degrees.  She said that mold on top was not a problem and to just scrape it off when we are ready to use that jar.

What I need to ask is why this lard smells so bad when heated in a pan.  Phew!

I've heard it is great to use in cornbread, or you can feed it to your dogs/animals as a treat.  We ate ours straight out and then fed the extras to the dog.  In retrospect, I'd freeze the extra cracklings.

What do you do with the cracklings ?

Annette: Thanks for the great tips! What all have you used your lard in? Have you made pie crust?

I have not  made a pie crust. . . yet.  =)  In the meantime, I use lard whenever grease is needed in the pan to fry and it is used in our cast iron, after cleaning; never use soap on cast iron.  We either rinse or wipe out, recoat (wipe down) with lard and hang up.  I have used lard for cookies and while it make puffy cookies, the dough is not fun to eat.

A pie crust is in my future though.  The recent discovery of a gluten allergy has caused me to rethink my 'food culture' i.e. the type of flour I use.  No longer wheat flour, now I am exploring some of the gluten free all purpose flours.  Next year I will grow some heirloom red corn, mill my own corn flour and explore more with that.

Let us know once you've made your first crust and post a picture, if you think of it.  =)

Arghh! I've made several in the last year but didn't take photos. But there is a lot of pie in my immediate future, with the holidays coming up. Shall we both make crusts sometime soon and take photos? I'll be curious to hear more about your experiments with flour, too—and very curious to hear about your corn flour project next year!