The following 101, on saving and using bacon grease, comes from HOMEGROWN member Cynthia, the practical voice behind the blog A Life Beyond Money. Thanks, Cynthia. Please keep the good ideas sizzling! 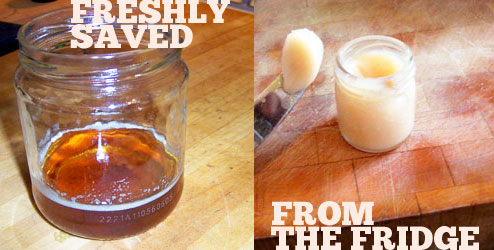 One of the great paradoxes in life: While bacon is beloved, its byproduct, bacon grease, is often treated like an unwelcome byproduct. It’s so hot! And disposing of it properly seems like such a pain!

Don’t despair, bacon lovers. You can use that grease in place of cooking oil to save money (ca-ching) and to add that incredible bacon flavor to other dishes (yum). And then there's soap (more on that later).

I keep my bacon grease in a glass jar in the refrigerator so that it lasts longer. I can’t say how long, exactly, because I’ve never managed to keep it around long enough to go bad. If you keep it on the counter, you should use it fairly quickly, just to be safe. One note: I suggest using a wide-mouth jar for storage to avoid spilling hot grease all over the place. Not that I have any experience in that area.

Once you’ve saved your grease (which looks more like shortening than oil once it has cooled; see photos up top), what should you do with it? Get suggestions below and don't be shy! Post a comment and share your own uses for this liquid gold.

» Spread on bread in place of butter for grilled cheese sandwiches. Honestly, the most decadent lunch ever.

» Fry greens and onions in it. This could be an effective way to get picky eaters to eat their greens.

» Add to ham and bean soup or baked beans for extra oomph.

» Fry or scramble eggs in it. 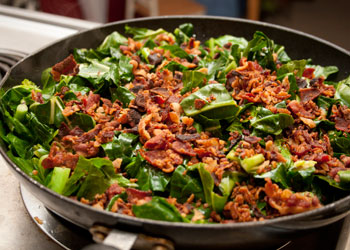 » Use in place of lard in homemade refried beans.

» Use instead of butter in mac and cheese or mashed potatoes.

» Make fried potatoes or the most awesome French fries ever.

» Use to season steamed or boiled vegetables.

» Pan fry squash, onions, or other veggies in it.

» Rub under the skin of a chicken or turkey before roasting.

» Caramelize onions to use on everything. 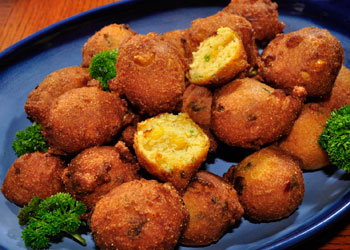 » Use to pop popcorn on the stovetop.

» Use for cooking hot dogs.

» Use to grease a panini press.

» Use as a warm salad dressing with a bit of vinegar. (HOMEGROWN member Janet shares another dressing method in a comment to this blog post, by Jenna.)

» Add to hearty soups, such as potato soup, or use to boost veggie soups.

» Make white gravy and eggs: Brown a couple of tablespoons 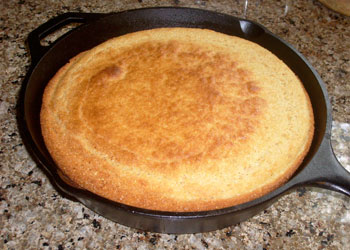 of flour in a heaping tablespoon of bacon grease then add milk and a small amount of additional flour, whisk, and cook until it thickens. Add chopped eggs and serve over sourdough toast. A family favorite!

» Add to dog food. Just be sure to use a light hand.

» Rub on the outside of potatoes before baking.

» Grease a pan for cornbread.

» Render it into lard to use in pie crusts or other recipes requiring lard.

» My friend found an old cookbook that called for bacon grease in a cake. She said it turned out well but interesting. I've also heard of people using it in cookies.

USING BACON GREASE AROUND THE HOUSE

» Make a candle. Yes, you read that right. Ehow has great instructions.

» Use it to season cast iron.

» Make a pine-cone bird feeder, with the help of HOMEGROWN member El Vigilante.

Got another way to use bacon grease? Or a question for Cynthia? Post it below and keep the conversation rolling! If you’ve got a hankering for bacon, you might also be interested in 101s on rendering lard, buying a whole pig, and if you’re looking for more ways to use up cooking leftovers, check out 101s on making pectin, and Cynthia’s 101s on five ways to preserve apples and six ways to use stale bread. You can always find more things to cook, preserve, plant, grow, make, craft, and build in the HOMEGROWN 101 library.

Re: bacon grease in cookies - yes, and yum. My grandmother used to make oatmeal cookies - "the recipe from the Quaker Oats box", she insisted. Nothing like. So my mom (her son's fiance, at the time), followed her around the kitchen and took notes as she made the cookies. Yes, essentially the Quaker Oats ones...the two major differences are that she used bacon grease to replace the called-for butter, and (since she worked, and didn't have time to do it all in one night) she'd make the dough one night, leave it in the fridge overnight, and the next night would scoop out the (quite stiff) dough and bake it. It made for high-piled cookies (instead of the usual spread-out thin ones) and delicious flavor. I actually make them with raisins rather than chocolate chips most of the time - I prefer them - but otherwise use Grandma's version when I have enough bacon grease. When I don't, I use all my bacon grease and finish with butter (by weight). Still yummy.

Jennifer! Thanks so much for sharing this lovely peek into your family's cookie history. Do you mind sharing the full recipe for Grandma's version? Either the raisins or chocolate chips version is fine; I'm not picky when it comes to delicious cookies!

I'll dig it up - but it's literally the one off the Quaker Oats box, that's where I'll go to get it. I need to anyway, we've got a good big lot of bacon grease right now...

Jennifer! Thanks so much for sharing this lovely peek into your family's cookie history. Do you mind sharing the full recipe for Grandma's version? Either the raisins or chocolate chips version is fine; I'm not picky when it comes to delicious cookies!