The following 101, on how to make soft pretzels, comes from HOMEGROWN’s flock tender, Jennifer, who is happy to pay homage to her German roots by eating lots of warm, buttery bread. I had a hankering recently to make soft pretzels in honor of Oktoberfest. The results were so tasty, we may start celebrating Oktoberfest year-round. Mouth watering when dipped in mustard, the pretzels are equally delicious hot from the oven or reheated in the microwave—a rarity! I had planned to share them with neighbors, but after a first taste-test and then a second, the pretzels were half gone and my generosity had dwindled. The only thing I’ll do differently next time will be to double the batch.

I relied on this recipe from King Arthur Flour as my guide. I used a standing mixer to make the dough, per the 101 below, but King Arthur also shares instructions for making dough in a bread machine, by hand, or in a food processor. They’ve got you covered! I left off the suggested salt garnish, figuring the melted butter glaze was decadent enough, but some kosher salt or a sprinkle of cinnamon and sugar would be a nice touch. Because the dough stiffens over time and I’m a slow roller, I appreciated having an extra pair of hands during the pretzel-shaping phase. There’s not a lot of skill required, just some elbow grease, so this could be a great fall project to try with kids. Prost!

» 1 cup warm water (KA says you can use 7/8 cup during warm months, but I ended up adding a few extra drops later on and can’t imagine using less.)

» optional: coarse salt or cinnamon and sugar—or get creative! 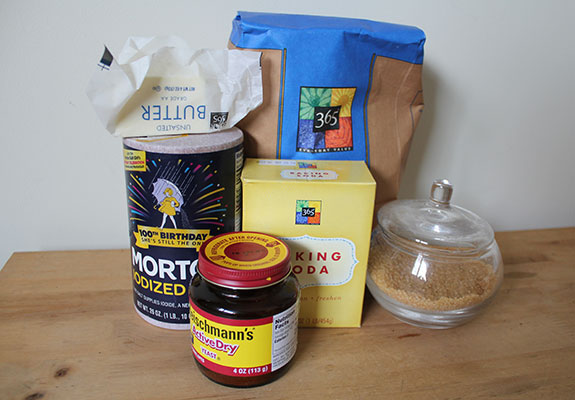 1. If you’re using a standing mixer, like I did, put all of the dough ingredients in the mixing bowl, attach the dough hook, and beat on a medium speed until well blended. 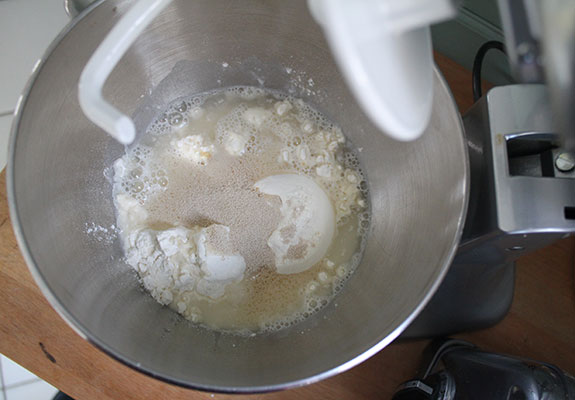 2. Continue to run the mixer on a slower speed for 5 minutes more; this is when the kneading happens. The first photo below shows the dough when it’s just mixed. The second shows what it looks like after five minutes. 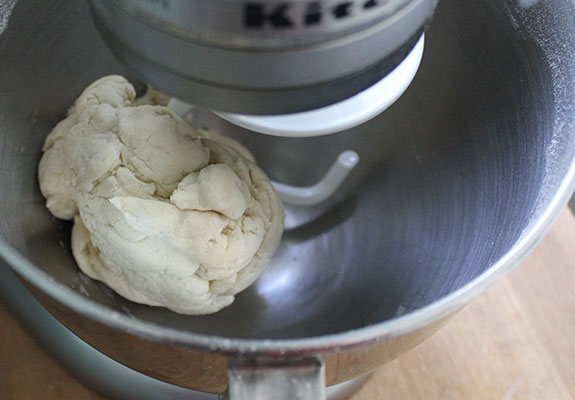 3. Dust the dough with flour and let it rest in a bag for 30 minutes. I used a paper bag with the end folded closed. 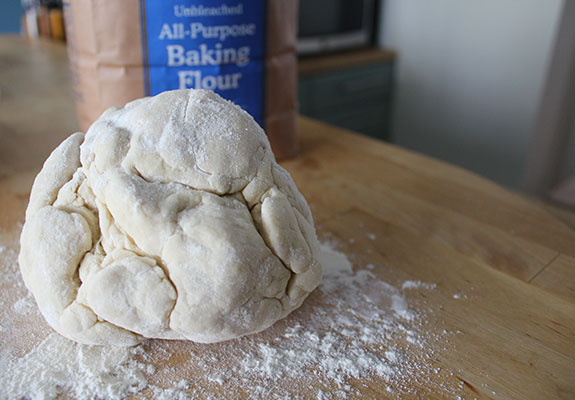 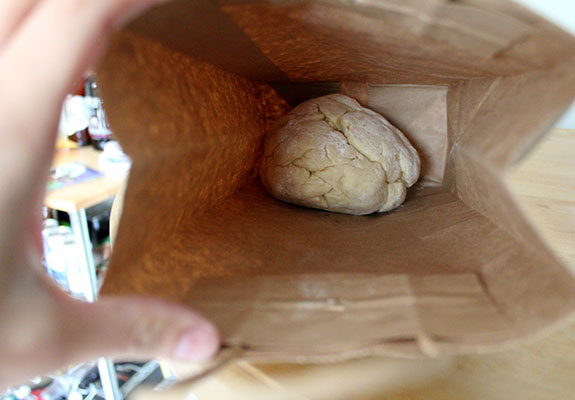 4. Now you’re ready to make the topping. I put the baking soda in a thick measuring cup, brought water to boil in a kettle, then measured the water into the cup. Stir until the mixture has dissolved—Bubbles! Science! Fun!—then set it aside to cool. 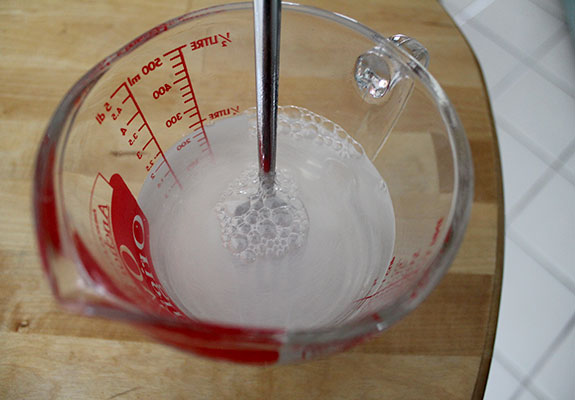 5. Transfer your dough to a work surface and divide it into eight pieces. No need to get particular when it comes to proportioning. I used a bench knife and eyeballed it. Let the dough rest, uncovered, for five more minutes. 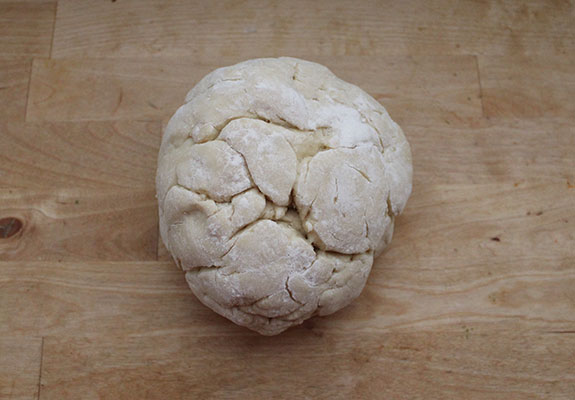 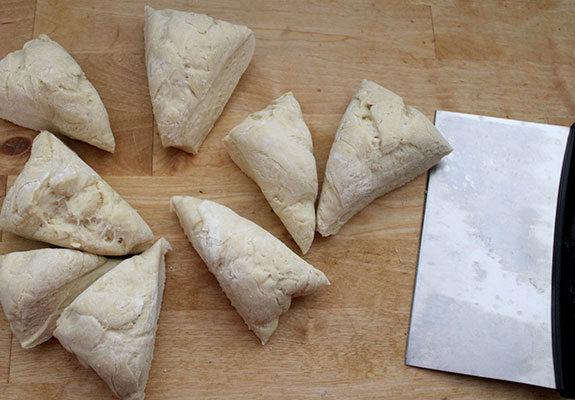 6. One piece at a time, begin to roll the dough into long, thin ropes. KA says to aim for ropes 28 to 30 inches long; I was lucky if I made it to about 20. You’ve got to put a little muscle into it; the dough isn’t superelastic and won’t stretch without encouragement. I found that I needed to dampen my fingers with cold water and rub a few drops into each piece. I made a ball and smashed it on the counter, rolling it out with both palms. I finished by holding the rope vertically between my palms and shimmying it back and forth, like I was trying to start a fire with a stick, beginning mid-rope and working upward, then flipping it over and doing the same to the rope's other half. 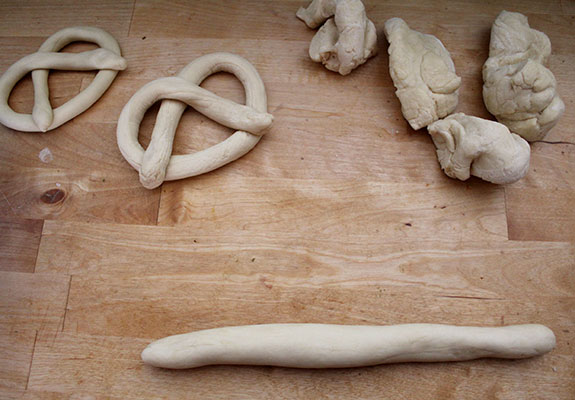 7. Twist each rope into a pretzel shape. Meanwhile, at some point during step 6, you’ll want to preheat your oven to 475F. Since I’m a slow rope maker, I started preheating the oven way too early, somewhere up around step 3. 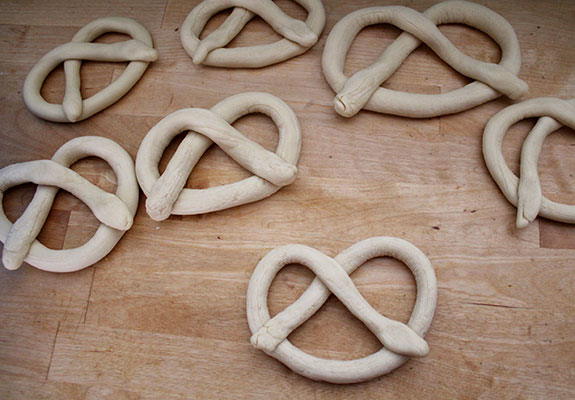 8. Pour your soda water into a large, shallow pan. (I used a 9-inch circular casserole dish.) Place as many of the pretzels into the pan as you can fit and spoon the water mix over them for 2 minutes per batch. In my very chilly kitchen, I found that I needed to stir the soda water briskly between each round. Transfer the bathed pretzels onto a lightly greased baking sheet. (I avoided greasing since a lot more butter is coming—wait for it!—and instead laid a Silpat on top of my baking sheet.) 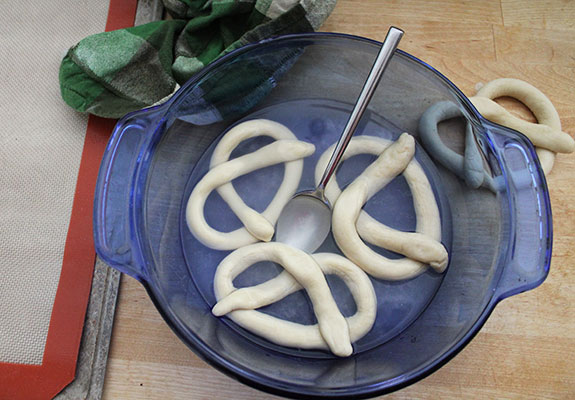 9. Here’s where you'll sprinkle the pretzels with kosher salt, if you're using it—or simply let the pretzels rest for 10 minutes more. Yep, these are some epically lazy pretzels. 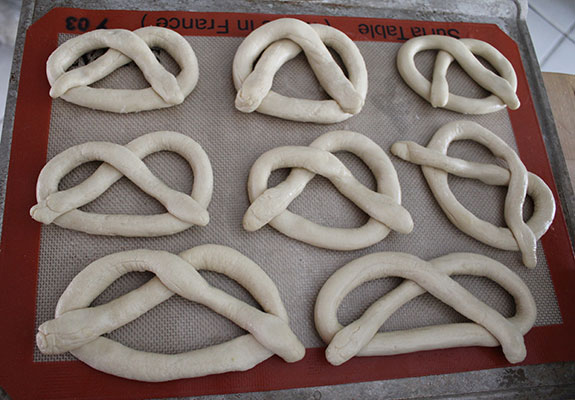 10. Bake for 8 or 9 minutes, until golden brown. Toward the end of the baking time, nuke 3 Tbsp butter until melted in the microwave, about 45 seconds. 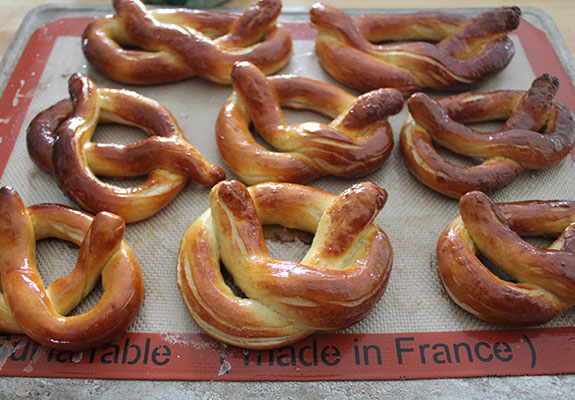 12. Let the pretzels cool a bit then dip them in mustard, if desired, and devour.

Got a question for Jennifer or your own twist on homemade pretzels to share? Post it below and keep the convo going! Bakers might also be interested in 101s on homemade pop tarts, cronuts, and crackers, making cultured butter, starting sourdough, and rendering lard. If you’re looking for more fall-flavored culinary projects, give the 101s on homemade mustard, leftover pumpkin parts, homemade candy corn, apple cider caramels, honey sticks, sauerkraut, and five ways to preserve apples a gander. You can always find more things to bake, cook, plant, grow, make, craft, and glaze in the HOMEGROWN 101 library.

I made Oktoberfest pretzels a couple of weeks ago but they didn't look as nice as yours.  I'll try your King Arthur method next time.  The dough only needs 30 minutes rising time?

Bill: These did turn out really nicely! The only trick was that the dough isn't the most pliable ever, so rolling out each "snake" took a little time—and a little elbow grease. Yep, the dough rises for 30 minutes, but then it sits a bit longer once you've divided it into eight pieces and then yet again before you pop the pretzels in the oven. Let me know how yours turn out!

Jennifer: I don't have photos but they tasted great and I'll make them again.  In the future I need to roll the "snakes" out thinner and create wider shapes because I lost loop integrity as some of the loops baked together and some came out looking more like twisty rolls than pretzels.

MMmmm, twisty rolls. I have to say, getting those snakes rolled out was the hardest part. So glad yours were tasty, even if they refused to stay put in pretzel shape.