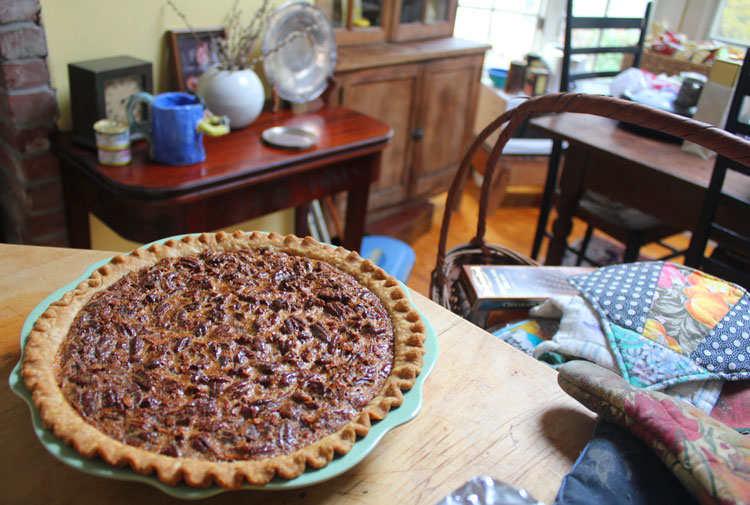 THE CHALLENGE
First things first: The biggest secret is how to pronounce “pecan” properly. Now, of course you’re welcome to say it however you want, just like you’re welcome to open up a can and call it homemade cranberry sauce. But as a native of the state whose official tree is the glorious pecan (that’s Texas, y’all), I have a vested interest that leaves my ears twitching every time I hear “peh-CAN” or, worse, “PEE-can.” Let’s say it together now: puh-CON. “Puh” as in “puh-lease,” “con” as in criminal. Whew. That’s better.

THE SOLUTION
In my family, pumpkin pie is a nice add-on, but pecan pie is the dessert of choice for Thanksgiving. And Christmas. And Hanukkah. And New Year’s. You get the picture. I’ve tried umpteen recipes over the years, from Mom to Martha Stewart, but my very favorite is from the good old Joy of Cooking. That’s one secret. Here’s another: I usually don’t make my own pie crust. (All right. I take back that crack about the canned cranberry sauce.) This year, though, I’m gonna try it, using the video down below from The New York Times as my guide. Wish me luck—or, better yet, post a comment or send me a message with your own pie crust recipe. I’ll be ever thankful!

THE INGREDIENTS
» 1 pie crust, prepared using the method of your choice
» 2 c shelled pecans halves
» 3 large eggs
» 1 c sugar
» 1 cup cane syrup (Update: After lots of experimentation, my favorite corn syrup substitute—WAY BETTER than corn syrup, in fact—is Lyle's. But you don’t have to take my word for it! Here's more on the difference between organic and high-fructose corn syrup. You can also make your own cane syrup or browse the suggestions in the comments below.)
» 5 Tbsp unsalted butter
» 1 tsp vanilla
» ½ tsp salt

THE DIRECTIONS
Before I do anything else, I melt the butter and set it aside so it has time to come to cool. Otherwise, it can cook the eggs when you add it to your pie filling.

Next, preheat the oven to 375. Now you want to break up your pecans. I usually use my fingers and snap each half into quarters, but you can lightly pulse your pecans in a food processor; just be careful not to overdo it or you’ll end up with pecan sand. Put your chopped pecans on a cookie sheet and toast them in the oven for 6 to 10 minutes, stirring once. Meanwhile, place your pie crust in a 9-inch pie plate (if you’re using a ready-made crust, put the flourier/less glossy side down) and flute the edges by forming little arches over your left pointer finger and pinching them closed with your right hand; vice versa for southpaws. When the toasted pecans come out of the oven, stick the pie crust in to warm.

Whisk together the eggs, sugar, corn syrup, butter, vanilla, and salt until well blended. Stir in the toasted nuts. Pour the filling into your warmed crust and bake until the edges are firm and the center seems set but quivery when you nudge the pan, 35 to 45 minutes. If I’ve warmed the crust and am using a ceramic pie plate, 40 minutes is usually perfect.

Here’s another secret: You have to let the pie cool on a rack for at least 1 ½ hours. Any shorter, and it doesn’t have time to set. One last secret? Homemade pecan pie really is that easy—but you don’t have to tell your family. The crust, however, may be another story. Wish me luck.

Try adding a few tbsp of vinegar to your cold water...or using buttermilk. I use 1/2 lard, 1/2 butter in my recipe and she's right about the bigger chunks. I don't have a food processer so I use my fingers to shmoosh it all in. The flattening of the fat rather than having chunks gives it those layers.  Much better results than using one of those pastry thingies with the 4 wires. Good luck!

Another secret to a more exotic and even richer pie is to throw down a layer of semi-sweet choc bits on the crust before you pour in the pecan pie stuff. Or Heath Bar bits! I also use bourbon instead of vanilla and then you can give it a really fancy name! Hard to taste the difference but it's fun! Now you  know all my tricks--at least for pah-CON pie! ;-)

I'm usually a bit of a purist when it comes to pecan pie, but that trick with the chocolate bits does sound awfully tempting. Thanks, Carol—and happy T'giving!

I've got two of these in the oven right now!  Same recipe as yours.  This is the first time I've made them at this elevation (6,000 ft)--I'm curious what will happen.

I also like to toss another half cup or so of nuts on the top about three quarters through the baking.

I eyeball my pie crust "recipe", since I've cooked it so many times by now, that I can't remember the exact measurements off the top of my head. I just grab a pound of butter and get working, since this dough is easy to freeze for later. Why not make either a big batch of small quiches in mini-tart pans, or freeze dough for impromptu pie baking? So yea... I buy a 2lb log of Amish butter, and use a third to half of it per baking session. :D

Cube about 1 stick of soft but not runny butter (or a little more), and work in enough flour (1-1/4 cups, according to my book) to make your arm sore and give it the texture of rough breadcrumbs. I use my five-pronged mixing tools (hands). If you're using salted butter, salt is optional, otherwise add about 1/4 teaspoon of salt. Add icy water (a bottle in the freezer for 20 mins or so does work fine, ice crystals aren't a big issue), until it's barely sticking together. Put into a 1 gallon zip top baggie, and flatten it into a disc. Stick in the fridge for an hour, or freeze until later. Roll out the dough and place into pie pan, poke holes in it with a fork, and bake in a preheated oven at 425F/220ºC for 12 minutes or until light golden brown. If you forgot to heat the oven before baking, put the pie pan back in the fridge to set the dough again while the oven heats up. Fill according to recipe, or refrigerate for later use. Recipe makes one top, or one bottom crust, so adjust as necessary.

I tend to replace some of the all purpose flour with a bit of rye flour, oat bran or other stuff in the crust to add it a bit of flavour, as well as extra fibre. I don't use sugar in the crust, so it's not as sweet. I was raised in a family with a lot of diabetics, so I like things less sweet.

We had three pies this Thanksgiving; Apple (Fully from scratch, husband insisted!), Pumpkin (Also from scratch. I forgot to add sugar to the pumpkin pie filling at all. Whoops! Salvaged with maple whipped cream!), and a friend brought Pecan pie from Whole Foods Market. I liked the pie filling, but the store bought pie's crust stayed on everyone's plate. Sort of warms the heart of a newbie baker. :3

Penny: Love this. Thanks so much for the great tips! I'm trying your way next time. I have a bit of leftover oat flour I've been looking to mix into something. If you have any photos of those apple, pumpkin, and pecan pies, please share 'em! P.S. MisA, I love that your standby is Joy of Cooking, too. How did the elevated baking go? Pictures, please!

Jennifer: I actually did have some photos, so I uploaded them. I'll have to dig into the only pie I have left for some apple pie photos, or bake that second pumpkin pie to get those. And yes, I have enough pumpkin pie filling and crust standing by for a pie whenever I want. :D

What are the issues re: corn syrup? if it's organic it would be non-GMO--very good choice.

Are there any acceptable substitutes for corn syrup?

A really, really good point. I could try simple syrup next time. Has anyone had any success with that—or have another substitute to recommend? Thanks for any ideas!