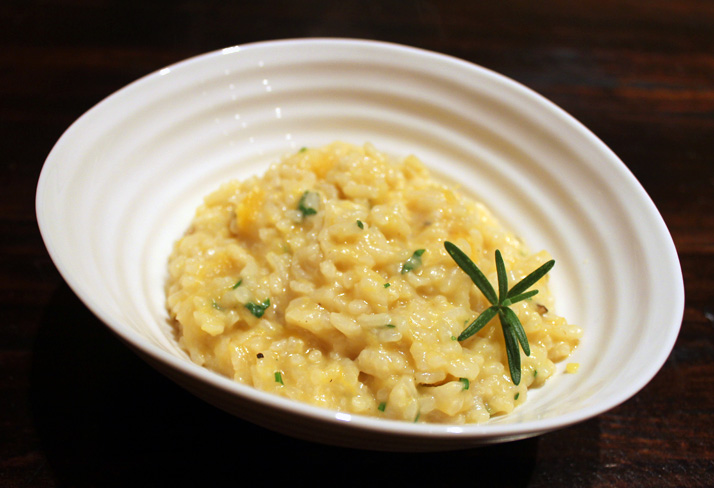 THE CHALLENGE
We had acorn squash from our farm share. We had risotto. We wanted to marry the two. Therein lies the rub: My trusty The Complete America’s Test Kitchen TV Show Cookbook includes a delicious-sounding recipe titled “Almost Hands-Free Risotto,” which requires only about five minutes, total, of stirring—nearly unheard of for such a high-maintenance dish. The same cookbook also includes a recipe for butternut squash risotto that requires more than 30 minutes of stirring.

THE SOLUTION
Who are we kidding? Of course we went for the easier version, tailoring it to include the squash. By taking a shortcut, we may have missed out on fully infusing some of that earthy squash flavor into the rice, but danged if I could tell the difference. I chose to enjoy the extra time I would have spent stirring eating a second helping instead. Our adapted recipe is below, with a couple of notable tweaks (ahem, pumpkin beer).

THE DIRECTIONS
Bring the broth and water to boil in a large saucepan over high heat. Reduce to medium-low to maintain a gentle simmer.

Meanwhile, slice the acorn squash in half lengthwise, gut the seeds and fibers, then peel the outside with a vegetable peeler. (First peel the ridges you can access easily, then slice the squash into long pieces, cutting lengthwise along the valleys, so that you can reach those trickier bits that still need peeling.) Chop the squash into half-inch chunks and sauté it with 1 T of the butter over medium heat in a small pan for 5 to 6 minutes, until tender. Remove from pan and set aside.

Heat 2 T of the butter in a large Dutch oven over medium heat. (The Dutch oven is crucial to the minimal stirring.) When the butter has melted, add the onion and ¾ t salt. Cook, stirring frequently, until the onion is softened but not browned, 5 to 7 minutes. Add the garlic and stir until fragrant, about 30 second. Add the rice and cook, stirring frequently, until the grains are translucent around the edges, about 3 minutes.

Add the beer and cook, stirring constantly, until fully absorbed, 2 to 3 minutes. Stir your squash and 5 cups of the warm broth mixture into the rice, reduce the heat to medium-low, cover with a tight-fitting lid, and simmer until almost all of the liquid has been absorbed, 16 to 19 minutes, stirring twice during cooking.

Add ¾ c more of the broth mixture and stir gently until the risotto becomes creamy, about 3 minutes. Stir in the cheese. Remove the pot from heat, cover, and let stand for 5 minutes. Stir in the remaining 2 T butter, the lemon juice, and herbs. Season with salt and pepper. If desired, add up to ½ c remaining broth mixture to loosen the texture of the risotto. (We reserved the broth to stir into our leftovers before putting them in the fridge.) Inhale immediately. Rich, creamy, and comforting—like mac and cheese for grownups.