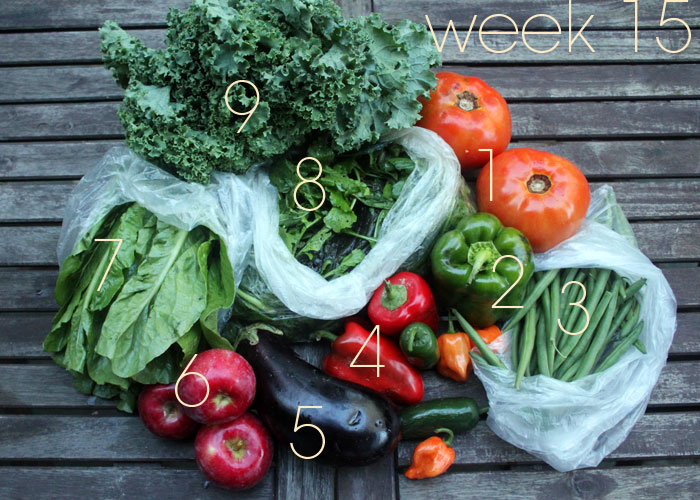 CSA COOKOFF WEEK 15: WHAT WE GOT IN OUR FARM SHARE & HOW WE USED IT

7. Lettuce: Salad for lunch, along with the spicy mix (number 8).

9. Kale: Sautéed with garlic and, yep, snuck into mac and cheese.

THIS WEEK’S RECIPE: MAPO EGGPLANT
Emeril, whose recipe I borrowed and tweaked a bit according to what I had on hand (spicy peppers!), calls this dish eggplant and green beans in spicy garlic sauce. I’m calling it mapo eggplant, because it strikes me as a great twist on the Szechuan standard mapo tofu, with eggplant in place of the tofu. While eggplant has won me over so that I’m no longer trying to cover it up or sneak it into dishes, this was the first recipe where I actually wanted even more eggplant. (Sort of like more cowbell except, you know, less crazy. And more delicious.) 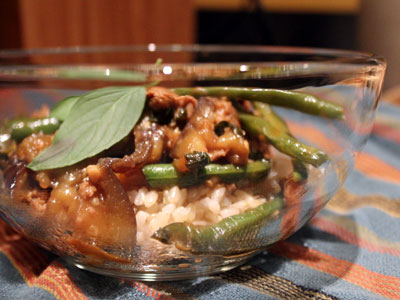 Combine the pork with the soy sauce and let stand. Meanwhile, bring a wok up to high heat then add ¼ cup oil. When hot, carefully add the green beans and stir-fry until the beans are slightly wrinkled, 5 to 6 minutes. Using a slotted spoon, remove the beans and transfer onto a plate lined with a paper towel to drain. Add ¼ cup oil and the eggplant to the wok and cook, stirring occasionally, until the eggplant is lightly browned on all sides, about 7 minutes. Remove the eggplant and set aside.

Add the garlic, basil, and peppers and cook 10 to 15 seconds. Add the pork and cook, stirring, until it changes color, 1 to 2 minutes. Return the eggplant to the wok, add the stock or other liquid, hoisin, vinegar, Sriracha, sweet chili sauce, and remaining tsp oil. Stir to mix well, reduce the heat to medium, cover, and cook until the eggplant is tender, about 8 minutes. Return the beans to the wok, add the flour and bring the mixture to a boil. When the sauce has thickened, serve immediately.