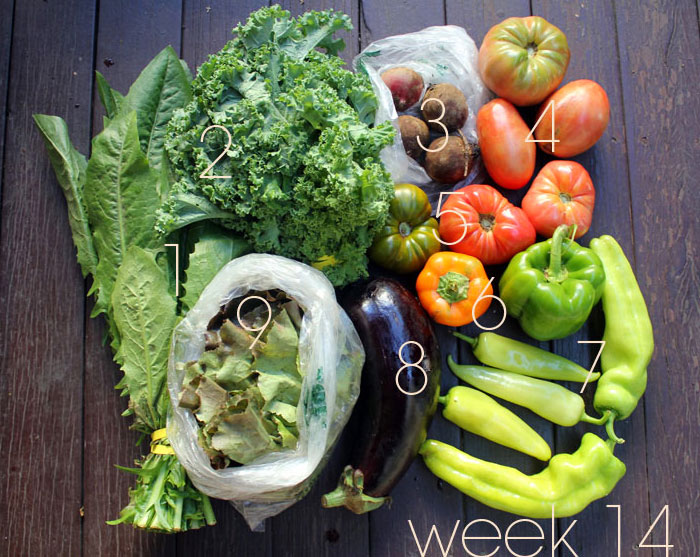 CSA COOKOFF WEEK 14: WHAT WE GOT AND HOW WE USED IT

1. Dandelion greens: Steamed, sautéed with garlic, and snuck into mac and cheese.

2. Kale: Went on one pizza with onions and chicken sausage.

4. Roma tomatoes: Sautéed and added to pasta, along with the leftover chicken sausage from number 2.

5. Heirloom tomatoes: Went on a second pizza with some of the frying peppers (number 7).

THIS WEEK’S RECIPE: FRAGRANT EGGPLANT AND PEPPERS
This week’s share was a bit of a mystery when I first opened the box. Let’s just say a grand vision of what to do with everything, especially all those peppers, didn’t immediately present itself. Google to the rescue. A quick search for “eggplant and peppers”—the two things I was hoping would fit together, somehow—yielded a version of the recipe below, courtesy of Bon Appétit. From there, the rest of the week’s meal plan fell into place, including two hearty pizzas in the backyard with friends. Checkmate, CSA! Here’s hoping your week was just as satisfying. Heat oil in a large skillet over medium-high. Add garlic, coriander, and cumin. Cook, stirring often, until garlic is softened, about 4 minutes. Add peppers and eggplants. Season with salt and pepper. Cook, stirring gently, until veggies are tender, 15 to 20 minutes. Remove from heat and add vinegar.

Bon App suggested adding saffron, but neither I nor my wallet missed it. We ate this alongside grilled skirt steak, though it easily could stand on its own as a main dish over couscous. Happy farm sharing!