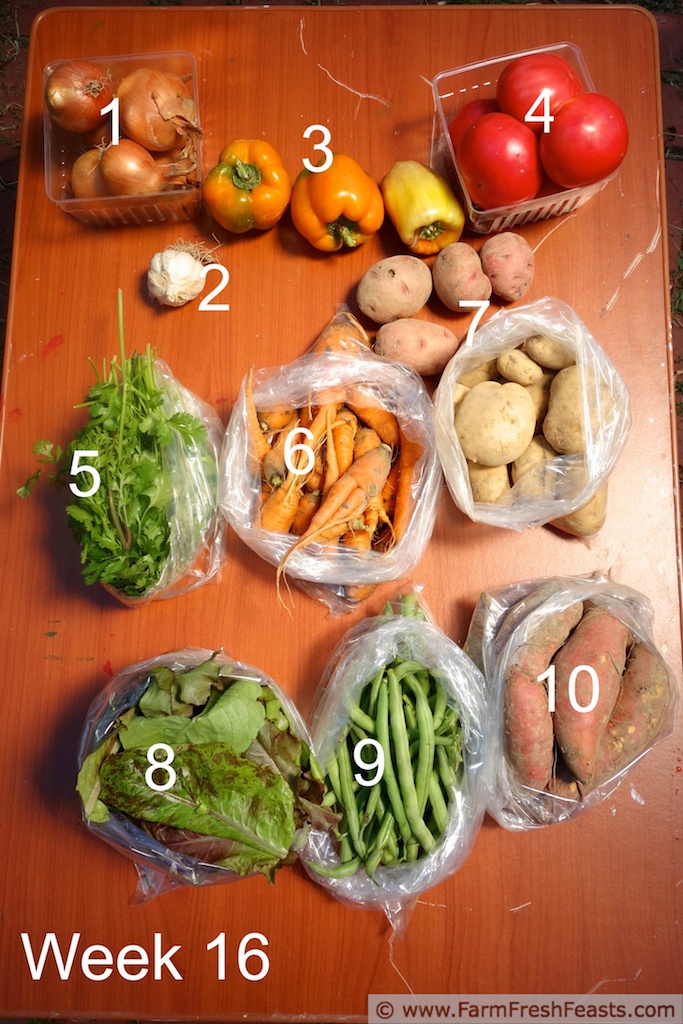 This week’s Cookoff comes from Kirsten, the force behind the fantastic Farm Fresh Feasts. Thank you, Kirsten!

CSA COOKOFF WEEK 12: WHAT WE GOT AND HOW WE USED IT
When Jennifer asked if I could write the CSA Cookoff while she was busy with the Farm Aid concert, I had one thought: Do we have to eat the whole share? My goal each week is to process the whole box, not necessarily consume it. I make it a point to put up as much as I can so that when CSA season is over, I can still feed my family from the share. For this end of summer/beginning of fall transition box, we got a good mix of storage and fresh crops.

1. Onions: Chopped and used in this week’s recipe (see below), as well as in beef stew, in Minnesota barbecue, and caramelized in the crock pot for pizza

2. Garlic: Some went into this week’s recipe (see below), some stored for later

3. Peppers: Chopped and frozen for winter

4. Tomatoes: On sandwiches and in this week’s recipe

5. Cilantro: In guacamole; in green chutney; as a garnish for this week’s recipe; and mixed with herbs, salt, and butter then wrapped and frozen in a log

6. Carrots: In beef stew, sliced and eaten with hummus as an after school snack, with the rest split between the composting guinea pig and soup packs in the freezer

7. Potatoes: Roasted with green beans (number 9) for this recipe; also went into beef stew and some stored for later

8. Salad mix: On sandwiches, in side salads, and for the composting pig

9. Green beans: Roasted with the potatoes (number 7) and used in beef stew

10. Sweet potatoes: The littlest ones went into this week’s recipe, with the larger ones saved for storage

THIS WEEK’S RECIPE: SLOW COOKER SWEET POTATO AND CHICKEN CURRY
This is a “meat as seasoning, not as the main event” dish, inspired by a butter chicken recipe I read in a magazine at the orthodontist’s ofﬁce. 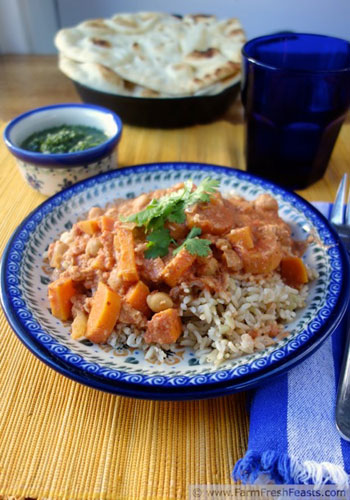 Preheat a large skillet over medium high. Sauté the onions in butter until soft. Transfer to a slow cooker. Dump in the sweet potato, chickpeas, and chicken. In a food processor or blender, pulse the garlic, ginger, garam masala, salt, almonds, and yogurt until combined. Add the tomatoes and blend until smooth. Pour over the contents of the slow cooker. Heat on low for 4 to 6 hours, until the sweet potato and chicken are cooked through. About 15 minutes before serving, stir in the heavy cream. Serve over rice with green chutney and naan. Happy farm sharing!