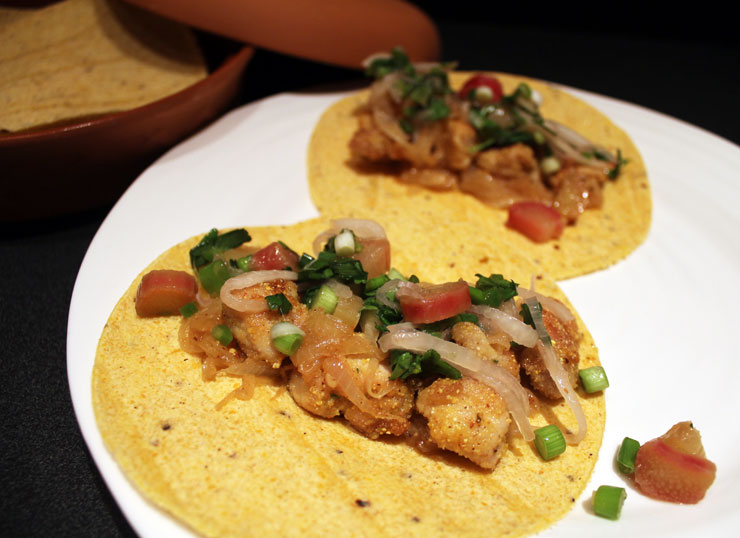 THIS WEEK’S RECIPE: CHICKEN TACOS WITH RHUBARB SALSA
Call it spring fever: I’ve had a thing for savory rhubarb lately. (See exhibits A and B.) I’ll move on to other in-season goodies soon, but when I came across this recipe for rhubarb salsa from The New York Times, I had to try it. The only catch: The recipe writer, who goes by the glorious name of Florence Fabricant, recommends ladling the concoction onto chicken liver tacos. Now, I’ve grown to love lots of things I wouldn’t touch as a kid—Brussels sprouts, for one—but liver is still something of a gray area. So when I found boneless chicken thighs at the butcher, problem solved. That said, the salsa was so sweet and tangy, and the sautéed onions so earthy, I almost wished I had taken a chance on liver. Almost.

Either way, this low-oil method worked great for frying chicken, and the cornmeal crust was delish. I’d make it again in a heartbeat, although next time I’ll try to savor it rather than just inhale it.

WHAT YOU’LL NEED
Yields 4 servings, light on the salsa

WHAT TO DO
Have a bowl of ice water handy. Bring 1 qt water to boil in a saucepan, add the rhubarb, blanch 20 seconds, scoop with a slotted spoon, and deposit rhubarb in ice water. Let sit 1 minute, drain, and transfer to a bowl. Mix in scallions, jalapeño, cilantro, and marinated onions. Blend honey into 1 Tbsp vinegar and add to the salsa. Toss.

Preheat oven to 200. Put cornmeal in a bowl and season with salt and cayenne. Dredge chicken in cornmeal. Add 4 Tbsp oil to a skillet and sauté chicken on medium, turning, until lightly browned on all sides. Remove to heatproof dish, cover, and put in oven. Add remaining 1 Tbsp oil to skillet. Add onions and cook over medium, stirring, until golden. Add remaining 2 Tbsp vinegar, stir to deglaze, and remove from heat.

Heat tortillas in a tortilla warmer or wrap in a damp paper towel and microwave for 30 seconds. Spoon onion then chicken then salsa into tortillas. Happy eating and happy spring!

STILL HUNGRY?
While CSA Cookoff is on hiatus for the off season, peruse HOME Cooked, a winter- and spring-friendly recipe file. We’ll post a recipe each week, featuring dishes from you. Don’t be shy. Share the goods. Especially the baked goods.