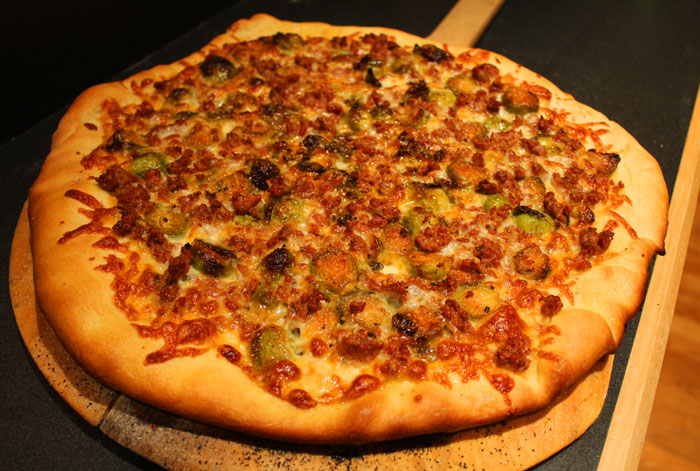 With many farm shares winding down for the season (alas, summer squash; we knew you well), it’s time to put the CSA Cookoff to bed. Look for it again in late spring, sprouting along with the arugula and the asparagus.

In the meantime, meet HOME Cooked, a winter-friendly recipe file that revels in the earthier corners of the fridge and the pantry. Think root veggies. And crispy cabbages. And baked goods—oh, the baked goods. We’ll post a recipe each week, and we’ll be trolling HOMEGROWN for dishes from you. Don’t be shy. Share the goods. Especially the baked goods.

THIS WEEK’S RECIPE: BRUSSELS SPROUTS AND CHORIZO PIZZA
My move to Massachusetts this year meant all kinds of awesomeness: Beaches! Mountains! Clams! But once in a while, I get a pang of homesickness for Chicago. Approximately 86 percent of the time, that relates to food. And about 34 percent of those hunger pains are centered on Belly Shack, a Latin-Asian street food joint from the chef Bill Kim. And about 49 percent of those grumblings are over Kim’s chorizo Brussels sprouts, a dish that’s both wholly unholy and utterly divine.

You can find versions of Kim's recipe online, but in my household, we have a philosophy: If it’s good by itself, it’s even better on pizza. And since we acquired a pizza paddle and stone a few years back, we’ve had an insatiable appetite for pizza. Don’t judge—at least, not until you’ve tried Brussels sprouts and chorizo pizza.

I cheat and use a bread machine, adding the ingredients in the order above (consult your owner’s manual for your machine’s recommended order). This dough takes just under three hours to prep, so it requires planning ahead. If you’ve got a fully hands-on dough recipe, please post it below!

WHAT TO DO
Put the chorizo in a deep skillet over medium heat and cook, stirring frequently, until browned, 5 to 10 minutes. You don’t need to add oil or butter since the chorizo supplies plenty of its own. Remove from the pan and set aside.

Add the sprouts, the stock or other liquid, and salt and pepper to the skillet and bring to a boil. Cover with a tight-fitting lid, turn down the heat, and simmer 5 to 10 minutes, until the sprouts are tender, adding liquid as needed. Uncover and raise the heat to boil off any remaining liquid. Resist the temptation to stir. You want the sprouts to get nice and glazed, even sizzling. When done, remove from heat.

Meanwhile, preheat the oven to 500 (if you’re using a pizza stone, it should preheat in the oven). When your dough is ready, remove it from the bread machine and roll it out into a 14-inch circle. If you’re using a pizza paddle and stone, spread some cornmeal on the paddle; this will help the dough slide off the paddle and onto the stone. Place your dough on the cornmeal-covered paddle and brush the entire exposed surface of the dough with olive oil.

Spread the chorizo evenly over the dough, followed by the Brussels sprouts, then the cheese. Bake for 12 minutes, remove from the oven, and let cool a couple of minutes before slicing. Try not to drool while serving.