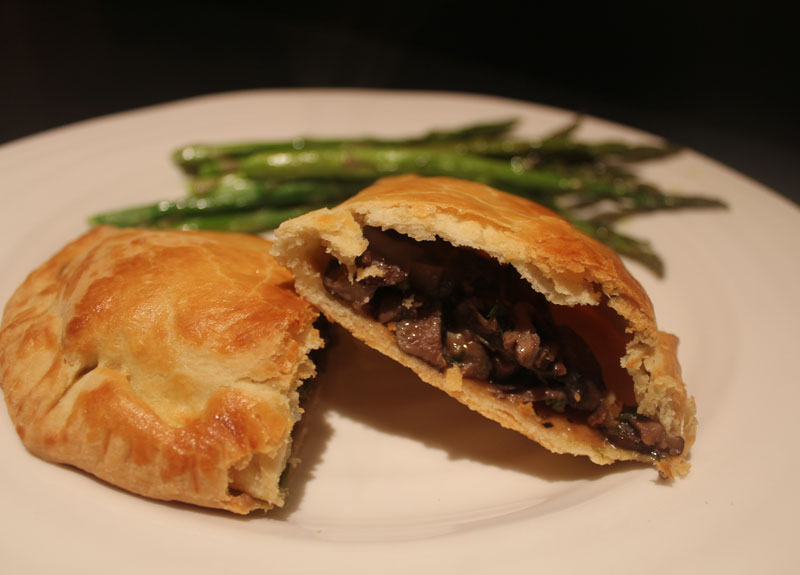 THIS WEEK’S RECIPE: MUSHROOM PASTY
No, not that kind pasty. Get your mind out of the gutter. The British handheld pie kind—sort of like an empanada but with a stiffer upper lip. (For the record, “pasty” rhymes with “nasty.” Which it isn’t.) I had a hankering this week for one of these tasty little numbers, and while I am admittedly afraid of pastry dough, I forged ahead. And not to toot my own horn, but hot dang! This is one of the most successful dishes I’ve attempted. Like I-would-pay-money-for-this good. Serve-to-the-parents-in-law good. And the best part—besides eating a steaming hot, mouth-wateringly delicious hand pie for dinner when it’s 5 degrees outside? My fear of dough is gone. Vanquished. Kaput. Now, that’s what HOMEGROWN is all about. (More photos here.)

WHAT YOU’LL NEED
I used this bang-up recipe, courtesy of the blog From Kirsten’s Kitchen to Yours, as my starting point; prep time took about an hour, plus 30 minutes of baking. Makes six large pasties.

FOR THE PASTRY DOUGH 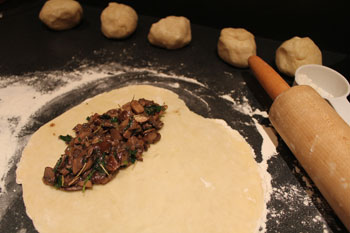 WHAT TO DO
To make the dough: Set butter out to soften in a small bowl and start water boiling. Sift flour, salt, and baking powder in a large bowl. When water is boiling, pour over butter and stir to fully dissolve. Pour melted butter over flour mixture and stir well. Chill for at least 30 minutes.

To make the filling: In a large skillet, sauté onion and garlic in olive oil until softened. Add mushrooms, salt, and spices, and cook on medium-high, stirring, until moisture has cooked off, 10 to 13 minutes. When mushrooms begin to stick, add wine to deglaze, scraping up any bits. Stir and cook until all liquid has been absorbed. Add parsley, stir, season with salt and pepper. Set aside to cool.

Preheat oven to 400F. Divide dough into 6 balls and roll each into an 8-inch circle. Divvy up filling into six portions and place on half of each dough disc. Fold dough over to close, press down edges, and seal with the tines of a fork. Beat together egg yolk and milk. Brush mixture over each pie then poke holes to allow steam to escape. Bake on a cookie sheet for 30 minutes. Allow to cool 5 minutes before eating—if you can muster the patience.

Being a Brit by birth, I used to be a sucker for a good Cornish pasty!  These mushroom ones sound divine!  I used to make large batches of traditional pasties to keep some easy meals on hand in the freezer.  After I'd filled the dough, and sealed the edges, I'd freeze them on a baking sheet.  Once frozen I'd wrap them, and then could just pull them out when I wanted them.  I'd just thaw them, add the egg wash, and bake!  I'm definitely going to have to try these :)

Clare: Freezing them prebaked—such a good tip! I have to say, I'm not sorry I have a few leftovers in the fridge for tonight.

Thanks for sharing the recipe. I tend to freeze ready-made meals like pizza pockets, mini-quiches and other homemade convenience foods for my husband to enjoy for lunch, and this looks like something I have to try out. With a mushroom filling, it'll come down to a fist fight to see who gets the last one in our house. ;)

Penny: I was a little worried the filling might be a tad bland since I chose not to use especially fancy mushrooms (I'm a cheapskate), but it was darn good. The original recipe that I consulted called for a tablespoon of cognac, which probably wouldn't hurt, either.