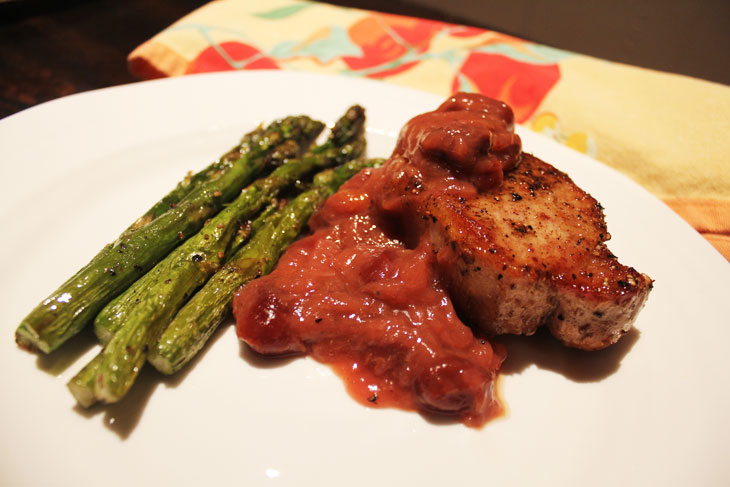 THIS WEEK’S RECIPE: PORK CHOPS WITH RHUBARB-SOUR CHERRY SAUCE
And just like that, it was spring. Yesterday evening was shining and glorious here—still chilly but a whole different ballgame from the blistering wind that was blowing the night before. After six months of that kind of nonsense, I had been feeling a little steamrolled by winter and in need of inspiration, so I polled HOMEGROWN’s Facebook friends for an ingredient they’d like to see in a recipe this week. And what do you know? Help came instantly! Thanks, guys.

It’s still early enough here that nettles and fiddleheads are hard to come by (we’ll get there, Dianes V. and H.), and while we haven’t hit official rhubarb season yet, I did manage to nab a few stalks from the market. Since everyone and her mother has her own sweet rhubarb recipe (including my mother-in-law, who makes a mean strawberry rhubarb jam), I thought going savory might be interesting. After trolling for ideas, I ended up borrowing this recipe, with a couple of tweaks, from that HOMEGROWN machine Martha Stewart. It was DELICIOUS and especially easy for a weeknight meal—though certainly memorable enough to add to the “feed to company” file.

WHAT YOU’LL NEED
Makes enough sauce for 4, though we prepared it for 2 and saved the extra for a treat later this week.

WHAT TO DO
In a small bowl, combine cherries, vinegar, and enough hot water to cover the cherries (tap is fine). Let stand 10 minutes to soften. Meanwhile, in a small saucepan, heat 1 Tbsp olive oil over medium heat. Add onion and cook until softened, stirring occasionally, about 10 minutes.

Add the cherry mixture, rhubarb, and sugar to the saucepan. Bring to a boil then reduce heat to a rolling simmer and cook about 8 minutes. Season with nutmeg, salt, and pepper. Turn off heat but leave on stovetop to keep warm.

Season both sides of chops with salt and pepper. In a large skillet, heat 1 Tbsp olive oil and 1 Tbsp butter over medium-high. Cook the chops about 3 to 4 minutes per side if ½-inch thick, 5 minutes per side if closer to 1 inch, with an additional 30- to 60-second sear on all edges. Check for doneness then top with sauce and serve. For a veggie version, I can also imagine this sauce on polenta—which, come to think of it, is how I might use the leftovers. Enjoy!