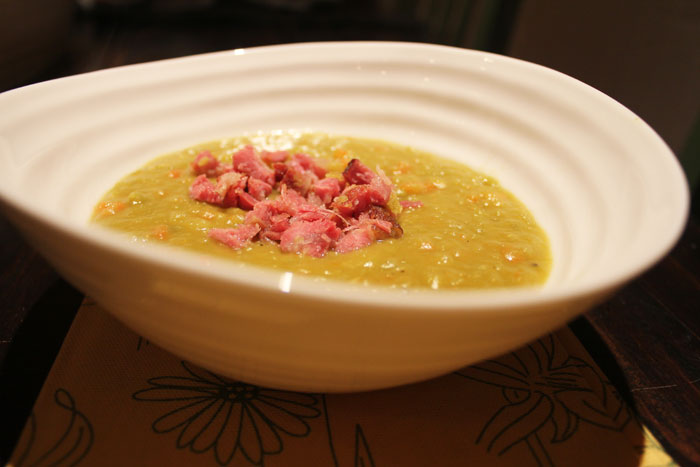 THIS WEEK’S RECIPE: SPLIT PEA SOUP WITH HAM HOCKS
Casandra asks. HOMEGROWN delivers! Last week Casandra of Orwell, New York, posted on HOMEGROWN’s Facebook page that she was looking for something delicious to do with ham hocks. She wrote:

“On our homestead, we try to have less waste while raising our own livestock. Using these items from our own pigs helps us stay connected to the earth in many ways.”

Now, I don’t raise pigs myself, so I had to turn to my local butcher for ham hocks, but the delicious part? This soup has it covered. I started with this recipe from the Food Network and incorporated a couple of tweaks recommended by reviewers. Just a note that you won’t get, say, a chop’s worth of meat off of the hocks, but the smoky, hammy flavor they impart while simmering is to die for—and the portion size is plenty, not to mention way cheaper than most other cuts of pork.

WHAT TO DO
Heat the oil in a stockpot then sauté the onion, celery, and carrots over medium-high for about five minutes. Add the peas and ham hocks and cover with stock and/or water by a couple of inches. (The hocks I had were fairly bulky and didn’t submerge fully in the liquid; since my pot was already near brimming, I opted to flip the hocks halfway through cooking rather than add more liquid, which worked just fine.)

Bring to a simmer and cook 1 hour, stirring occasionally, until soup is thick and peas have almost disintegrated. (I had my immersion blender on hand but didn’t need it. The consistency after 1 hour was thick and creamy but not too homogenous.) Season to taste with salt and pepper, if needed. (I didn’t.)

Remove ham hocks and let cool. Pull meat from bone and shred. Garnish bowls of soup with ham and pepper. (By the way, how cool is the concept of a meat garnish?) Thin any leftovers with water or stock before reheating. Did I mention that it’s delicious?

Got another way to use hocks? Post a comment below with a recipe or a link. And thanks so much for the inspiration, Casandra. I’m one happy hock convert.