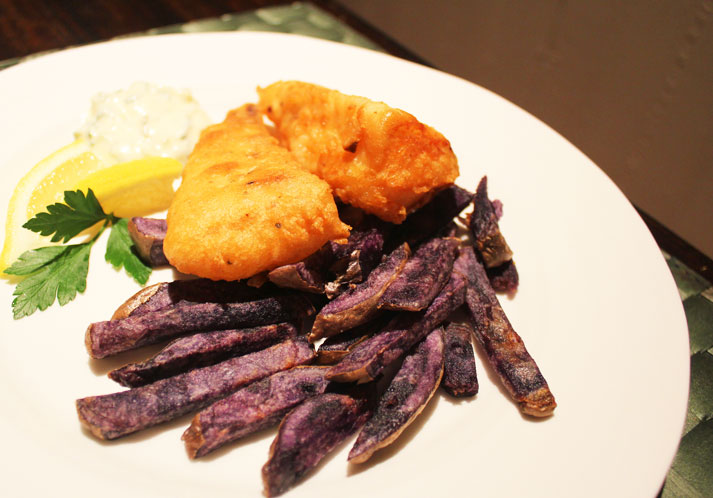 THIS WEEK’S RECIPE: FISH AND CHIPS
Now, I realize St. Patrick’s Day isn’t a particularly religious holiday here in the States, but I’ve developed some fairly zealous feelings about the fish and chips I made last night for dinner. The word “holy” might even have come up a few times. Thank you, Tyler Florence. Between the airiness of the rice flour and the mystical chemistry of twice-frying the potatoes (crispy on the outside, pillowy in the middle), this is easily the best fish and chips recipe I’ve tried.

A few notes: Chilling then double dipping the potatoes is key, as is the rice flour, which makes for an almost unbearably light batter—in a good way. I opted for beer over the recommended soda water. And because the idea of frying anything in 3 inches of oil gives me shivers, I opted for about 1 inch: enough to submerge the chips and almost cover the fish, which I flipped half-way through, though it did require frying in batches. Not crowding the pot is crucial. Heaven (i.e., your first batch of chips) can wait, especially in a warm oven preheated to 200.

FOR THE FISH AND CHIPS
» veggie oil
» 5 purple potatoes (similar in taste to russets but prettier—though 3 large russets would work)
» 2 cups rice flour plus ½ cup
» 1 Tbsp baking powder
» 1 tsp each salt and black pepper, plus more for seasoning
» 1 12-oz can light beer (or soda water; I used Tecate)
» 1 large egg, lightly beaten
» 2 8-oz pollock fillets, cut in half or smaller (or cod or haddock)

WHAT TO DO
The tartar sauce is best if the components have an hour or more to get cozy, so attack that first: Mix all ingredients then chill in the fridge. On to the potatoes: Cut into ¼-ish-inch sticks, no need to peel. Put them in a bowl of ice water and stash in the fridge for at least 30 minutes. (I left them for two hours.) When you’re ready to cook, drain off the water and dump the potatoes in a clean towel; pat dry quickly. Heat 1 inch of oil in a large heavy-bottomed pot or skillet. When the oil reaches 325 degrees or a test potato dropped into the pot immediately sizzles and collects bubbles, put the potatoes in the oil. (I did 2 batches.) Fry 3 minutes, remove with a slotted spoon, and drain on paper towels.

In a large mixing bowl, combine 2 c of the flour, plus baking powder, 1 tsp salt, 1 tsp pepper, egg, and beer. Whisk until smooth. Spread the remaining rice flour on a plate. Season your fish fillets with salt and pepper, dredge in rice flour, then dunk in batter. Drop in hot oil and fry for 5 minutes. Remove and drain on paper towels; if needed, you can transfer the fish to an oven preheated to 200 to keep warm. Dump your potatoes back into the oil and fry 5 more minutes. Remove and drain on paper towels. Season the fish and chips lightly with salt and serve with tartar sauce, lemon wedges, malt vinegar, and, of course, a wee pint. Sláinte, y’all.