Last night we joined Iso Rabins and several more adventurous eaters for a wild-foraged dinner. Iso is the founder of ForageSF – a Community Supported Forage in San Francisco, and hosts these “underground restaurants” as a way to bring folks together, and to share his passion for “what’s out there, just growing”. He's also a maker in the… Continue

Well, things at the Bunn Sharing Garden are popping! The flowers on the tomatoes and tomatillos have made way for tomatoes hanging on the plants. We're hopeful tomatillos will soon follow.

Tomatoes hanging despite the Colorado Potato Beetles that attacked! We attacked back today with some Bonide chemicals (one of the better, hopefully less toxic ones) and hand-removal of the larva from the plants. Disappointed we couldn't find a way to stay organic... we'll have better info to be… Continue

How To: Build a Container Garden

Oh, contain yourself! My garden plan for this year consists of three 4x4' raised bed containers, which means I needed to build two more boxes. Here's my simple "how to" for building raised garden beds.

I've been a member here on HOMEGROWN since it debuted as a social network and have enjoyed following the conversations and getting inspiration from all of the things people are working on, but I haven't written any blog posts here - until now. Exciting to be witnessing history, isn't it?

It is getting too hot in Central Texas for most lettuce and greens but herbs are still strong. When it gets too hot the lettuces will "bolt" or go to seed. They send out flower stems which later become seeds and the tender, sweet greens become bitter. I took an organic packaged mixed greens salad from HEB Plus in Leander and added fresh, just snipped organic herbs which included Texas tarragon, parsley, 2 kinds of basil and dill from my organic front yard garden. I added some white crumbled… Continue

My Globe Artichokes are FINALLY Budding Out!!!

After years, my globe artichokes finally budding out. They are beautiful plants I bought locally here in Leander, Texas at a nursery that has since closed. This was my first venture growing these. I don't know why they aren't more popular garden fare here. I understand California has mostly cornered the market on commercial artichoke growing. I want more artichoke plants now. The foilage alone is beautiful, I love to eat artichokes and as an added… Continue

We are trying to draw some attention to our disaster of a back yard. We have signed up in hops to be part of ABC 6 Extreme Backyard Makeover in turn our pictures and story have generated many comments! I would like to keep them going. It would be most helpful if you could take a peek at our story and perhaps leave a comment on what you think of the situation. The winner is picked at random so I am not using your comments to win this contest just to show some light on my situation.
Thank… Continue

This isn't directly about growing your own food, but food politics are a large part of my motivation. One of the reasons I started to grow my own food was after learning more about GMO food from a documentary called "the future of food," which i'd reccommend to everyone. But as far as I know, this week is the first time scientific evidence has been publicized of the dangers of GMO food. The following is crossposted from Living Lime:

This last weekend I made homemade noodles. Quite tastey, I might add. I remember my Mother making noodles when I was little, having me help unroll them and laying them out to dry on the counter.

So lately, I have been craving these noodles.. especially after telling Bryan how fantastic they were when I was little. My stories of my Mother's cooking always prompts cravings and brings nostalgia.

Here is the recipe I used:

There's something completely rewarding to step out front and pick our lunch. Lettuce, chives, herbs are all producing in the garden and landing in the salad bowl. I really should count the amount of steps from kitchen to vegetable bed. I don't think I'd need to carbon offset those steps, would I? Oh sweet sarcasm. Let's do it visually. I may or may not have… Continue

In spite of the fact that it got down to -1 this weekend...
I made what I call Kitchen Sink Salad, which consists of me going outside and picking everything that's ripe or needs to be thinned: radishes+greens (radish greens are a lot like spinach in taste/recipe potential), buttercrunch lettuce, red leaf lettuce, mesculin mixture, kohlrabi sprouts, borage, mizuna, sweet allium leaves, plus edible weeds like dandilion (only young leaves, which I think are less bitter), and shamrocks. Then I… Continue

Knowing when to plant and where

Mother Earth News just published a useful collection of climate information, freeze/frost dates and regional planting guides. Author Tabitha Alerman says:
Knowing when to plant, water, weed, fertilize, mulch and harvest can get pretty overwhelming when the season’s in full swing, so here are a few resources to help with garden planning. Now, go out and grow your best garden… Continue

We planted a row of turnips which, at the first rain, all washed to one side of the row.

Now we have a thick, thick patch of beautiful turnip leaves. I think we are going to harvest some of the patch to eat as greens, and then after they have been naturally "thinned" by our eating some greens, we can let them all grow into turnips to eat later. (Frankie loves turnips!)

How To Grow Uber Tomatoes, even when you start them too early

Every year I start my tomatoes in February. I don't have a south facing window--I am totally reliant on shop lights to help them grow. But instead of being leggy, my tomatoes are crazy drought-proof beasts that take over the world. Last year, my Matt's Cherry tomato grew about 9 feet wide, and the neighbours had to cut it back just… Continue

I have a grow-op in my basement. It's not what you think. I have more than 60 baby pepper plants, 100 baby tomatos, 3 hibiscus, 5 brugmansia trees, 2 abuliton, jacobinias, artichokes, 5 varieties of basil, a goji berry yearling, and many many other beautiful or edible plants that would be dead if I left them outside for the winter. I grew a pineapple in my basement. If I used high pressure sodium grow lights, the utility bills would kill me. Instead, I have 5 banks of fluorescent shop lights… Continue

Ed Bruske at The Slow Cook has a great recommendation for taming rigid straw into usable mulch - a leaf shredder - great tip! 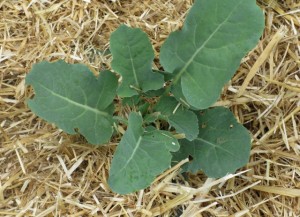 Today I made friends with a woman who breeds rabbits for use as pets. Because I came to take her poo.
What would I want to do with several bins of rabbit poo? Because you can't run a closed loop system (self sustaining) garden without animals to help you fertilize, and rabbit manure is the greatest fertilizer made in this part of the world (next to worm castings, but I'd need a LOT of worms). Plus, it's the only manure that doesn't need to be composted first. And the roll-y pellets don't… Continue

Houston, we have germination!

Last Fri/Sat/Sun, we planted the two acre Bunn community Sharing Garden. Everything grown in this garden will be given away to local families and local food distribution centers. We planted some of the plants we had: tomatillos, tomatoes, and Hatch's chile peppers. We also planted seeds for radishes, turnips, beets, carrots, cucumbers, cantaloupes, peppers, beans, lima beans, peas, and more.

Yesterday (Friday), we stopped by. Basically, we babysit these two acres and go by every day!… Continue

This past weekend, the hubby and I drove down to NYC for the Brooklyn Food Conference - a volunteer-organized gathering of food activists and curious eaters. Like Meredith said in her post, there were waaaaay too many workshops to attend (70! In one day!), 3000 people came eager and left energized.
The highlights for me:
Workshop I: Workshop… Continue

Che, my 3 year old, and I picked our first 2 blackberries yesterday. It's been fun teaching Che to be patient with the berries. As soon as they started turning red, he's been wanting to pick them. When he saw they were darker, he was very excited that picking day had arrived.

Since we only had 2, we tried to savor them, but after one small bite, he popped the whole thing in his mouth. A little tart, but delicious!…