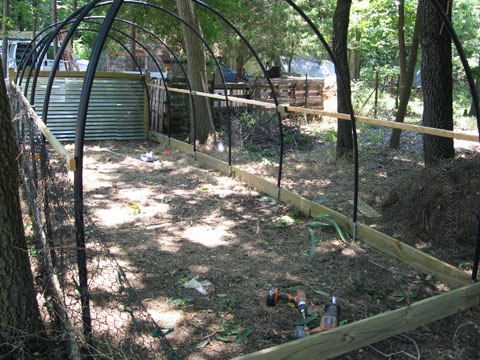 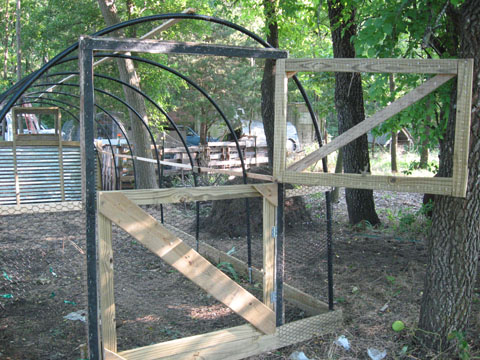 This year we were blessed by an increase in our livestock. My aunt, who is a second grade teacher, hatched out seventeen chicks as a classroom project and gave them to us. We are always grateful for free chicks! A few weeks later my aunt called us up again with news of twelve more chicks from another class. Before we knew it we had chickens everywhere! It became clear we would need a new hen yard to… Continue

Book: "Farm City: The Education of an Urban Farmer" by Novella Carpenter

Novella is a fearless and often hilarious Oakland city slicker, determined to achieve a respectable level of self-sufficiency while still reaping the rewards of urban life. Her book is a chronicle of how she did it, what went wrong and what went well. Here is the first chapter for free:
NYT exerpt

Here is a… Continue 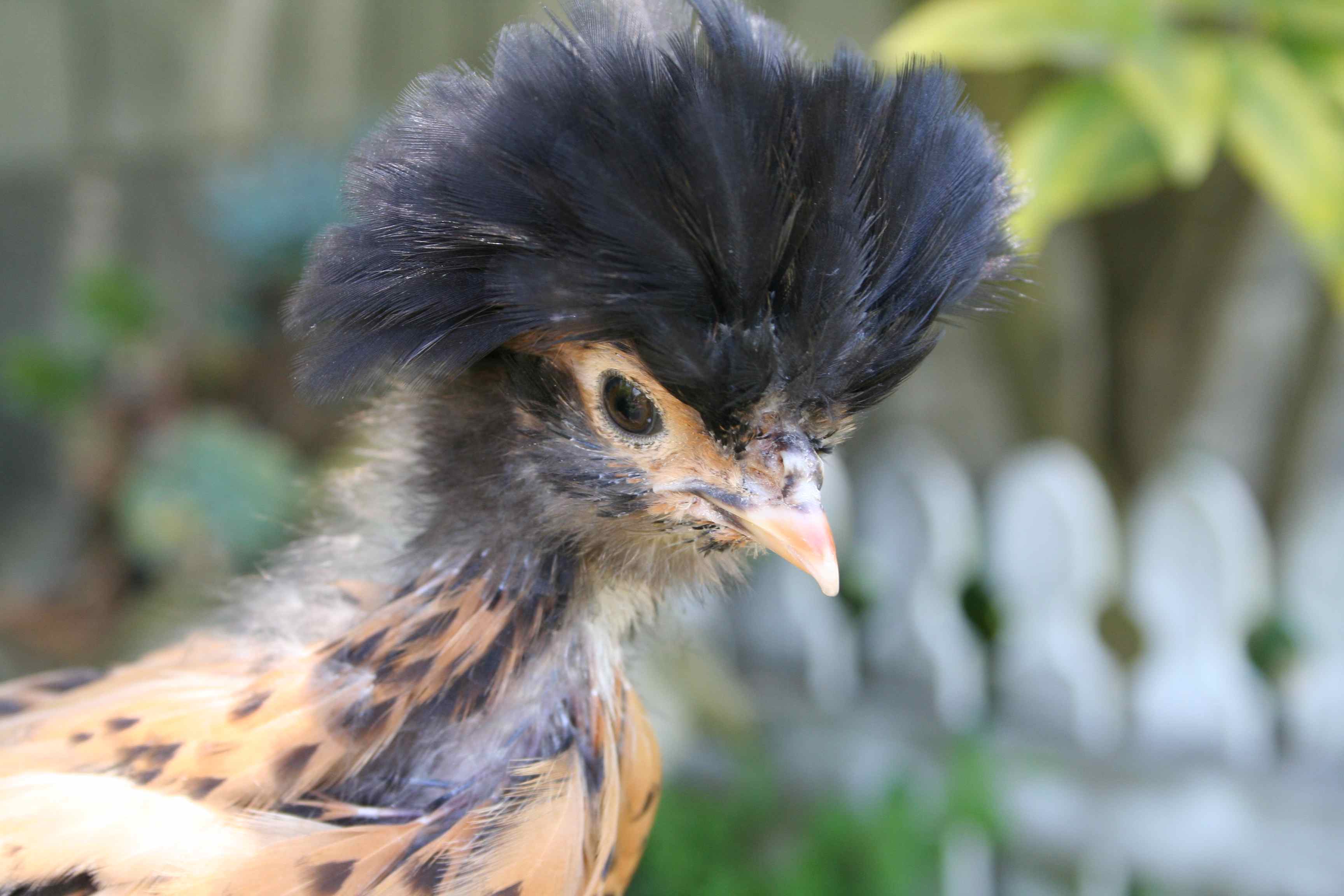 Here is a link to a video of our latest addition to our urban garden flock. Her name is Charlotte and she is a Polish chicken having a "bad hair" day.

This July 4th, let's declare our food independence by sourcing the ingredients for our holiday meals as locally, sustainably and deliciously as possible and let's ask our elected officials to do the same.

Local foods are patriotic, whether you’re buying them from producers in your area or… Continue

The building of a potato condo

The Building of a Potato Condo 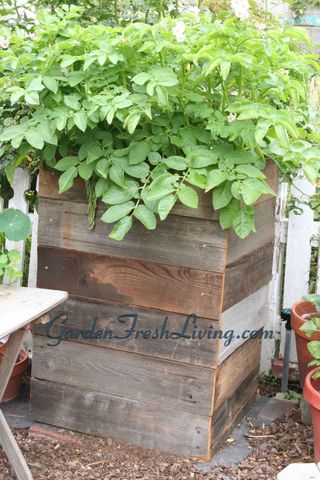 The idea is that you build a wooden box and plant potatoes in the bottom layer. As the potatoes grow, you keep adding wood boards (and soil) to keep… Continue

Grow And Share gardeners reporting back on their plants

When we did the Garden Plant Giveaway in April, we were able to give each gardener who signed our pledge (to share) about 5 pots of… Continue

First raspberries of the year. Lots of snow peas and the last of the first group of radishes. I'm up to 30 tomato plants in the backyard. Three acorn squash plants are finally coming up out of the ground.

...In a cluttered front yard tableau that might be called American primitive, or uncontemporary casual, (in which Fred demonstrates his priority is growing, not prettifying), you can find a hundred and eighty varieties of genuine heirlooms. Let’s see, Fred’s got sungold, Brandywine, Yellow… Continue 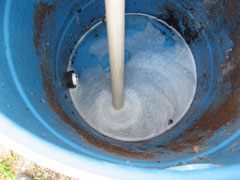 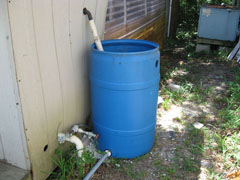 This month's project has been making a bog pond in order to utilize our gray-water. We already make our own hot water by way of our solar-waterheater, and we make our own laundry detergent. So it seems only natural for us to use the water after it cleans our clothes.
Here's how it works...After the washing-machine is done the water empties into the first… Continue

An intern's day on the farm - "the sowing holds the potential..."

"So you do, in fact, reap what you sow. Eventually. The elaborate labors in between make that harvest possible.

In my second week on the farm, I learned, for example, to thin beets. Tiny beet seeds tend to cluster, so plants spring up in mini jungles that won't give anyone room to grow. Thinning means crouching--or, when your back aches, crawling--through baby beet beds to pluck out all but the healthiest plants, four fingers' width apart."… Continue

NYT: “You can vote to change the system,” (the broken food system) “three times a day.”


"Growing up on a farm near Yamhill, Ore., I quickly learned to appreciate the difference between fresh, home-grown foods and the commercial versions in the supermarket.
Store-bought lettuce was always lush, green and pristine, and thus vastly preferable to lettuce from my Mom’s vegetable garden (organic before we called it that). Her lettuce kept… Continue

Just so I know for next year--
I've planted 26 tomato plants in my yard. Two in the side yard. One in the container. The rest in the back yard.
My boyfriend has over 60 plants in his yard and he's thinking of putting some of the extra plants in the community garden. No idea what kind of tomato plants are where because the labels all fell off while the seedlings were very small. Of course, I like surprises. 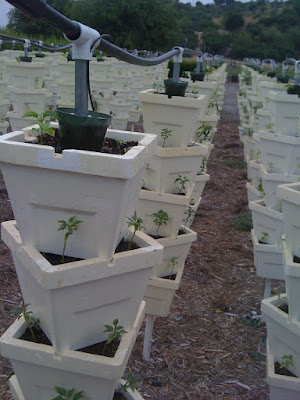 Garden growing, and soon we'll have produce to give away

Well, our tomatoes, tomatillos, peppers, and beans are in flower and there are small veggies starting to show on the plants. We're hopeful that within the next 14 days we'll be able to start harvesting.

All of the produce from our 2-acre "Sharing Garden™" will be donated to local distribution centers. These specially chosen distributors will give the food away to any family/individual who shows up and says that they need food.

Hard times call for all of us to contribute… Continue

Rotting veggies, manure, worms, creepy crawly bugs of all kinds turn you on? No? They should. Getting your kitchen scraps, animal crap, and lawn clippings to nourish your soil so that you can grow your own food is totally sexy. Especially if you can do it in 17 days, a decomposition "quickie" so to speak.

On average, compost takes almost a year to fully decompose into luscious, crumbly hummus - that good coffee brown stuff that is like steroids for plants. AND you have to turn it… Continue

It pays to be a pack-rat! 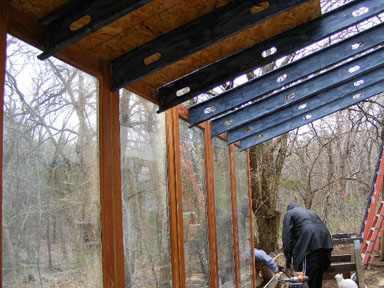 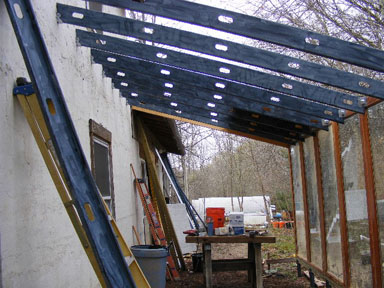 Homesteading is a mind-set and a lifestyle. It spills over into everything you do. And one of the best virtures you can have is thirfty-ness. This winter we built a new greenhouse/sunroom with 80% salvaged materials. My dad is a pack-rat and that helped! We had half our supplies already. He had collected steel girders (which he's had as long as I've been alive!) we used for the rafters. Now I don't… Continue

fundraiser seeking farmers willing to talk about / demonstrate their trade

Grow And Share is holding a fundraiser: a music festival September 6 2009. There will be music and vendors, and we will offer a limited number of free vendor booths to farmers. Farmers chosen to use the free booths must be willing to talk about farming, demonstrate how they supply food, and even provide samples. You may also sell during the event (some guidelines/limitations). Contact info [at] growandshare [dot] org for more information.

Photos from the Dairy Rally & My HOMEGROWN Wannabe Dreams

This week at Farm Aid, we welcomed Joel back to the office after his trip to Iowa last weekend where he attended the Dairy Rally for Fair Prices. Thankfully, weather cooperated and turnout was good - farmers and participants from eight states showed up and spoke about solutions to the ongoing dairy crisis (the short version of which is, dairy farmers are being paid less for their milk than it takes to produce… Continue

What the Cluck ~ Chicken T-shirts! 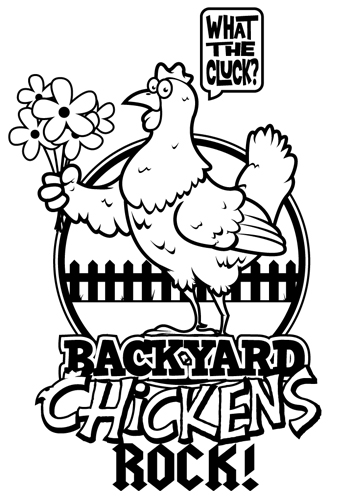 Backyard chickens DO rock!!! You know they do!! And now, thanks to some wonderful artwork by Dreg from All Natural Me ~ www.allnaturalme.com, you can help let other people know that they do too!! Show your love for sustainable and local living by sporting one of these groovy shirts, no matter where you live!

We're now taking pre-orders for our 1st batch of shirts - only $15 a shirt (plus shipping if you don't live locally). The short… Continue