Despite Steve Soloman’s recommendation to leave half of Pacific Northwest  garden beds for fall/winter crops, I have always struggled with the timing.  Seeds planted after the Summer solstice never grow well, if they germinate at all. Plants put in later do not thrive; they know that my energy is pulled off, towards the new school year, when September begins. And, if I do get the sowing times correct, there is never a real space for the plants in late July, when they have to be…

The Pacific Northwest is defined by our relationship with water; we have two seasons—cool and wet and warm and dry. Settlement is along rivers and our summers are cooled by the sea breeze that sweeps inward in the late afternoons. During wet winters, we may not see the sun or moon for months, but we enjoy hunkering down under the sheltering clouds, walking home in the misty dark. Then, one day, somewhere between Memorial Day and the Forth of July, the rains stop. The clouds…

Planning for Solar Panels, part one 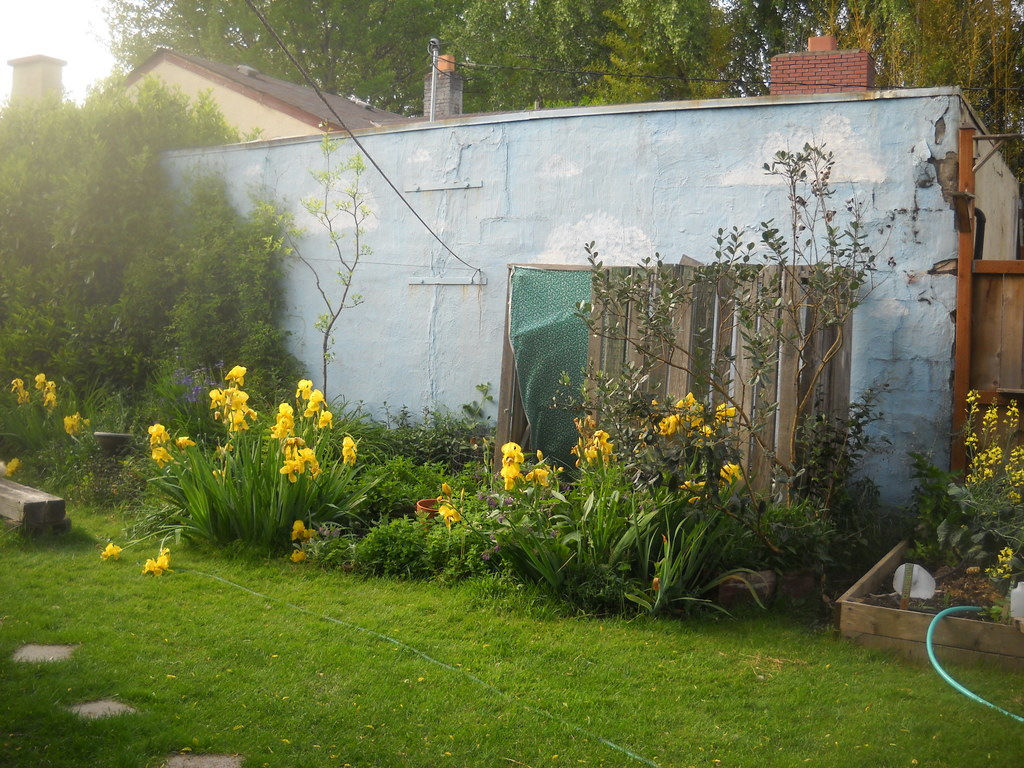 Planning for the solar panels/greenhouse has begun….I came home last week to find two men sitting in my back yard, contemplating the blue wall. One had a notebook, the other a tape measure. They were discussing building code.

We began thinking about solar panels last winter, when we went to a presentation, not because we were interested, but because we wanted…

It is official. I am smarter than a chicken.

Henny, our scrawny white leghorn, has been escaping from the chicken run for the last few weeks. It was annoying, especially after we closed all of the obvious escape routes, but not that big a deal. After all, chickens just want to be with the flock, so, after a few moments of running around and shouting “Free at last!” she would wander back to the coop and dig through the garden bed next door, waiting for the gate to open for her…

Our chicken coop is perfect-sized for two chickens. It is five feet by four feet, A framed, sized to perch on garden beds in the winter and under the laurel tree in the summer. However, we often have more than two chickens, because we like to keep the eggs coming, but cannot kill an old hen. We put them out to pasture. This is a problem; the coop that holds two ladies peacefully creates mayhem when there are four, still working out turf battles. For years, we fought with chicken…

In the Willamette Valley, warm dry October afternoons are deeply unsettling. Natives are especially nervous, eying the blue skies like there is something fundamentally wrong with golden sunshine. And then, one day, the clouds roll in, smelling of the sea. Deep grey, they drop the sky down to a more human scale, and then, more come. And more. Soon, they bump up against the Cascades and flow back over the valley. One afternoon, the rains begin. In my north-facing classroom, we look up.…

Distribute the Surplus. It is one of the founding principles of Permaculture. And one of the tasks is to discover these surpluses and where to pass them on, reaching another Principle, which is “The problem is the solution.”  Usually, at this time of year, I am in the middle of one of my favorite Distributions, which is fresh figs from our tree. But this year is a little different. We had a deep cold snap in the valley last winter, and many fig trees died back to the ground and…

Lucy and the Apple Press

Lucy the Cat enjoys her role as supervisor. She loves to climb ladders, to sit in the driver’s seat of vehicles, to poke at eggs and other fragile objects resting on the table, and to demand attention whenever we have company. This week, she was totally engaged in  apple harvest and pressing.

Apple Harvest is a two part project. First, we took our ancient, wobbly wheelbarrow two blocks down the street to an old apple tree in the front yard of a shabby vacant…

City Repair. Public Art in private spaces. Little Library.  I’m not sure what you would call it, but we completed our Posting Post this afternoon and it looks pretty fine.

For years, I’ve admired the City Repair Projects in Portland, where neighbors come together and paint the streets, or build a playhouse, or create art out of recycled objects; I’ve even modeled my Honors American Literature final around the idea. Art that you stumble upon while running errands, art that makes…

But Henny is glorious in her…

One of the best things about living in Corvallis is the number of people who are working for change. We have Mr. Eager (yup, Eager), a retired OSU professor whose wife remembers pre-war Germany, who is interested in solar energy. So, they set up a two different systems of the roof of the passive solar house they built in the early nineteen seventies, to test which was more efficient on rainy days. If you visit, you can climb up to a rickety viewing platform to examine the panels…

Homestead Harvest is in…and the tally is:

Anyone who believes that we live lives of Voluntary Simplicity because we have a couple of hens in the backyard, some locally grown tomatoes on the shelf and one car in the driveway has not seen my schedule book lately. I am beginning to feel like an Honors Junior angling towards Stanford. They have colored coded planners, fifteen things happening in a day, and no time for the common cold, never mind a weekend off. Me, too. We are all  practicing Voluntary Complexity, not…

Gardener? Or Urban Farmer? Which are you?

When I first started gardening in my mother’s back yard, she called me a Russian Peasant. It was not a compliment. I headed out back in the evening with my head wrapped in a scarf to keep the mosquitoes at bay, wearing old sneakers, and carrying a pitchfork. In the late summer, I brought turnips and carrots to her customers, who loved them. Years alter, when I actually met a Gardening Russian Peasant in Portland Oregon, I had to agree—I did look like a peasant. Maybe Irish, rather than…

The Queen Bee is back home.

On Monday, I went into the hive to check on progress and make some adjustments to the comb bars. As usual in a natural comb hive—at least, I believe it is usual because it always happens to me—a few combs broke off in the process. Honey spilled everywhere. Several combs were pure honey, so I placed them on the already prepped harvest platter. Two had some brood and pollen on them, so, when I was finished, I laid them back in…

Denial is a powerful thing….for weeks, we have been looking at the peeps as they grew into peepsters and pondering Betty Lou. She was bigger than the other Barred Rock; her comb was a brighter red and more pronounced; her peep chest butts were more forceful than the others. But, I just thought “She was born a few days earlier.” Or “She has a stronger personality than the Buff Orpingtons. Barred Rocks are a more aggressive chicken, after all.” I never thought—is she a…

One of the benefits of having a bee hive in the backyard is “free” beeswax. We’ve been gathering our wax for several years, working out a way to clean it sufficiently. After some experiments, Mark bought a colander from Goodwill, lined it with an old tee-shirt, and melted the comb down over a pan of boiling water. When he lifts the colander, the hot wax streams through the fabric and cools on the surface of the water. Voila! A disc of clear beeswax!  The disc lived in the…

Being a serious gardener is not about growing the purple-podded peas and heirloom tomatoes, searching the catalogs for new and exciting varieties of potatoes. It’s not about new and fancy gadgets, or garden art and colored flower cages. It’s not even about planting your own starts on a rainy day, slipping them into the ground under the cloche just before the hail sets in. Being a serious gardener is about maintaining the soil. And it is not easy, nor for the faint of…

I wrote this in response to the comment on Mother Earth News, about The Homesteaders of the Year (I'm one) not being self-sufficient and living off of their land....

I call our home an Urban Homestead to evoke the days when people traveled west, settled on a piece of land, and went to work to improve it, turning it into farmland. Was this always the best decision for the land? Probably not. Did they all remain on the land?—not at…