Canning, Dehydrating and Freezing, OH MY!

The past 2 weeks have been a flurry of harvesting and processing the abundant bounty we've been blessed to receive, and there is plenty more still on the vines/tree! 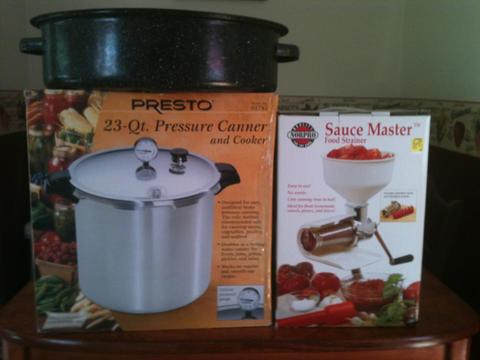 We started the week with 12 pints of mushroom Spaghetti Sauce using our organically grown heirloom "Roma" tomatoes we grew from seed, as well as herbs grown ourselves. This was my first attempt at…

Although we have made many happy landscaping discoveries this summer (Peonies, Iris, Lilacs, Snowball Bush, Rose of Sharon and more!) at our new homestead, the front landscaping around the house and deck had been completely neglected by the previous owners. With all of the other projects going on throughout the spring and early summer, I too, neglected it. BUT, the good news is-  it's not too late to get your flower beds ready for next year, and it's a great time to save money by purchasing…

It's Going to Be An Active August!

Well, the inspections for the bank and local municipality have been completed, and all of our rehab work has been approved! We're just waiting on the final disbursement check so that we can pay our roofer. It has been quite the ordeal, but well worth it a little headache and a lot of elbow grease in the end!

I had mentioned before that our riding lawnmower had quit... Well, this past weekend, we were given a riding mower, which we desperately needed, as "payment" from a friend of ours…

Over the weekend, we acquired a 2 year old Boer/Pygmy Whether named Houdini. He is stubborn and tries to get out the gate, but extremely friendly and will follow you around like a dog :) All of the 5 older hens seem to be laying now, and the 4 younger gals should be large enough to start getting acquainted with them in a few weeks!

I'm taking a break from the last of the barn painting... Scorching 89 degrees, but thankfully I'm working on the shaded north side/rear.

Eggs, and T-Storms, and Tin Roofs, OH MY!

Saturday, we finished painting the barn (save a little touch up here and there) just in time for a huge Derecho type straight-line wind storm to peel back 2 of the tin roof panels like a sardine can, and bent back the corners of the ledge on the west side. I'd never seen anything like it in my life. The sheet of rain was so thick, you couldn't really even see out the front window. I had a barn full of people who promptly piled into the basement thinking it was an approaching tornado! Quite…

We got our first 2 eggs tonight! Since Peckerina, our White Leghorn, is the only white egg layer we have, we assume the smaller egg was laid yesterday, and the larger one today? They're fairly small, but I'm assuming they will get bigger as she fully matures. She's 17 weeks on Monday. Regardless, we are very excited! 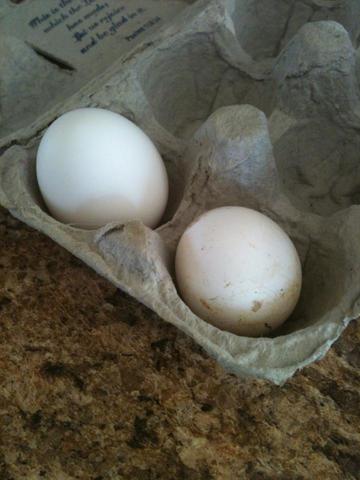 Besides receiving our first eggs, we also got 4…

Overwhelmed By Grass and Weeds...

We've been so busy lately with coop building and other projects around the place, we neglected our garden for a few weeks. It has become over-run with crabgrass and other miscellaneous uselessness. (Fortunately, though, the veggie plants are still doing very well regardless!) Turning a horse pasture into a field of herbs and vegetables is turning out to be extremely tricky with our limited available equipment and resources...

Good afternoon! We just received a good soaking of much needed rain! (I've been walking gallon jugs of water out to the field drying the dry spells...)

The seeds we planted are doing very well so far, although we've had several cayenne plants die off due to freak late near freezing temperatures. Luckily the jalapenos and tomatoes had not gone in yet. The greasy bean seeds my Dad gave to us from his harvest last year are already beginning to climb the tipi. So far, so…

We've been EXTREMELY busy working on projects and planting! We've had a few minor set backs, but all in all, it's coming along.

The chickens will be 13 weeks old on Monday! Won't be long now til we have eggs! Unfortunately, the coop is yet to be completed, we need to get them outdoors ASAP! They are currently living in a make shift pen in the basement!… 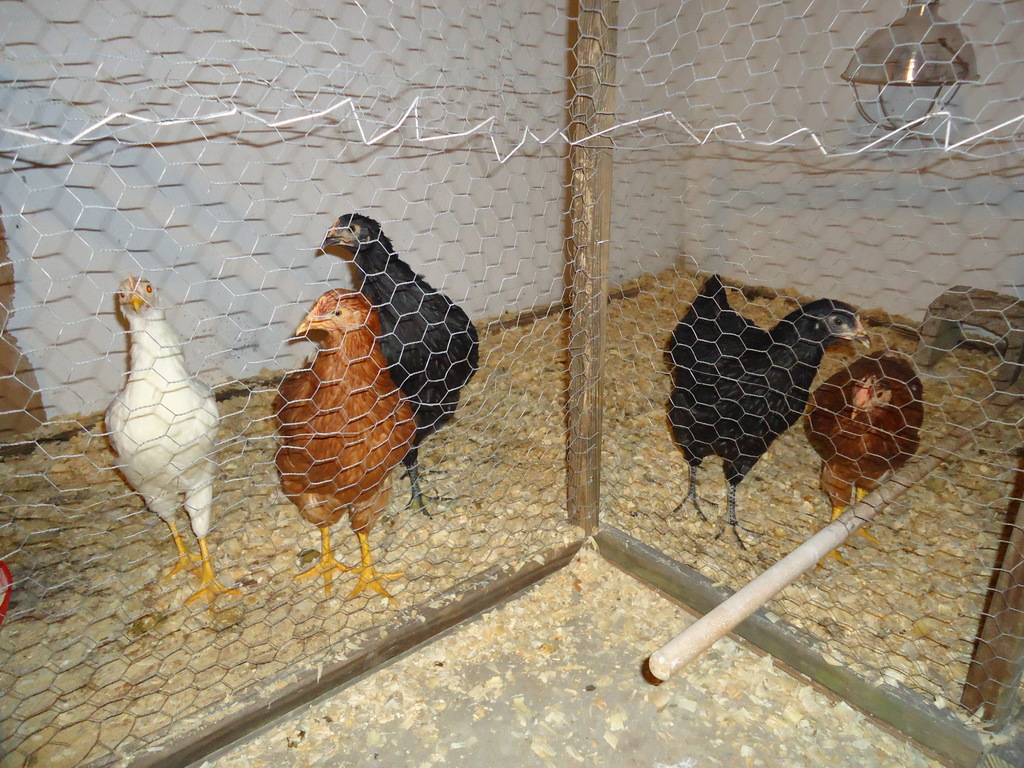 As of yesterday, it's been a month since we moved to our 3 acre homestead, which we've dubbed "Lil Raisin Acres", so named for the tributary running out front called "Little Raisin River" (hardly a river, more like a ditch...). We've been EXTREMELY busy.

Firstly, we had to paint the kitchen in order to have our cabinets and appliances installed. The former owners, who'd been foreclosed on, had removed every stitch of anything other than floor from the kitchen, including the plumbing…

The Long Wait, Nearly Over... Hopefully...

It's been a long 9 weeks since we first put in an offer on the homestead we're purchasing. It's been a long process due to certain requirements of the type of loan we're obtaining. That said, the light at the end of the tunnel is in sight at last!

We're going to be VERY busy for the next 6 mos or so to be sure. So much to do I can't even list it all, but besides the contracted kitchen rehab and roof job,  painting/papering, outbuilding rehab and tilling up a field are some of the…

With recent outbreaks of salmonella, e. coli, and listeria, it's understandable that there is concern about safe harvesting and processing…

Just placed my Baker Creek order! $69.50 for 30 packets of seeds- Not bad. There are a few veggies and herbs we will need to purchase locally (garlic, onion sets, seed potatoes, rosemary, horseradish) along with our flowers and fruit trees.

Here's what we'll be growing this year:

A Homestead for Christmas!!!

It's been quite a while since I've last posted here... I've been making a LOT of jerky on my new dehydrator, and trying out new bread recipes. I hope everyone had a Merry Christmas. I know I did! I got the ultimate gift. For the past 3 or so years that I've been a member, I've always talked about wanting a small homestead...........

AT LAST!!! We've found one! The week after Thanksgiving, our offer was accepted on a 3 acre parcel with a modest ranch style home on it! We got an…

As I'd said in my last post, I'd been looking around a lot at different options for the future. Thinking about what I truly need, and I can do without. In reality, I really pretty much live 80% of my indoors time in this bedroom with attached bath (about 12x10, 5x7 bath). We've got a 32" TV, Roku player, laptop, books, etc in here. Otherwise, we cook, eat dinner at the table, and generally come right back in here! We've also got completely useless vaulted ceilings as…

It's been quite some time since I've visited!!!

Last May, we relocated from SE MI to NW OH. For about the last year, we've been in an apartment. I haven't had a garden since the 2010 season now. I'm really missing it, especially the fresh herbs. I had planned on making a small container garden on the balcony, but I got busy, drug my feet, and next I knew, it was already mid-June!

I know this heat and drought conditions have to be trying everyone's patience. My…

Not So Great Harvest...

First it was fertilizer burn death for about 3/4 of my seedlings, then it was a flooded out plot, then it was scorchingly arid weather followed by constant tornado watches and warnings... It hasn't been a good year for gardening here in SE Michigan, atleast not in my yard!!!

But, the good news is it can always be rectified. First, some vinegar to kill off the massive amounts of weeds that have accumulated thanks to bird seed we put out in the feeders. Wait 2 weeks, add manure…

Spent this evening clearing up clutter for "Spring Cleaning". We rearranged Britt's bedroom and are raiding our storage areas in the house and shed for items to sell in the Community-Wide Yard Sale next weekend! We've got a bunch of clothes that can go, some extra computer and PS2 controllers, movies, books... It's amazing how much stuff I've acquired in the 9 years I've lived here!

On the frugalling front, I've not only given up my smokes, but I've also given up soda. This is…

I am so mad at myself I'd kick my own butt if I could! I had two dozen beautiful tomato seedlings and a dozen basil plants... Yeah, I'm down to about a 3rd of that thanks to what appears to be fertilizer burn caused by my stupidity... I put too much fish emulsion and not enough water apparently... They started wilting off a few hours after I used it. I mixed the amounts I normally put on plants in the middle of the growing season instead of for seedlings :(

Thankfully I can just go… Continue

The peas, lettuce and periennial herbs are growing right along, and we planted some broccoli, cauliflower, and sage starts as well as carrot seeds this past week. We're under a frost advisory overnight tonight, thankfully I've got varieties that can withstand light frost ;)

I will set out my seedlings we started in the house this coming weekend. The following we will be planting seeds and starts at my parent's place out in Hillsdale County. They sold their house here in the city and… Continue