A Letter From My Farmer - It's Spring!

It was so nice to be able to picture the beginnings of the food I will be eating this summer, and what farmer Steve is up to as the ground awakens again. I thought I would share it with you, too! 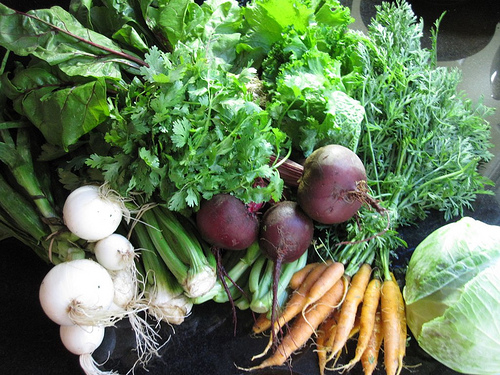 Well, I have started planting in the greenhouse, so no matter what the calendar says, as far as I am concerned it’s officially spring! Not that we had much of a winter, which was fine by me. I have been asked often how I think the non-winter this year will affect the planting/harvest season, and honestly, I am not sure. One thing that comes to mind is that the fairly warm temps may have allowed for a higher than usual survival rate for insects and diseases, which obviously could be a problem (I heard a radio report predicting widespread defoliation of maple and oak trees this summer due to winter moth) but on the plus side there is no frost in the ground to speak of, so the ground should drain and warm up fairly fast, creating good conditions for early planting, however the lack of snowpack melting may cause moisture shortages later on in the summer. I am looking at expanding my existing irrigation pond, as well as digging another one on my new property in anticipation of drier than usual conditions. Generally speaking a dry year is much easier to deal with than a wet one.

As mentioned, the planting in the greenhouse has commenced, and I am proceeding at a furious pace! My guess is that in the first 6 days of planting so far over 100,000 seeds have been sown, among them around 50,000 onions-cippolini, red "bottle”, standard red, red and white pearl and walla walla types, still waiting for the standard sweet onion seed to arrive (should be here by Tuesday) so I can plant those; 12,000 chard (red, green and yellow), 4500 broccoli, 4500 cauliflower, 6000 kale (red, green and Tuscan) 4000 cabbage (red and green), 4000 kohlrabi, 10,000 beets, 2400 lettuce (Bibb, romaine and red leaf) 700 napa,700 pak choi and a couple things I cant remember; today I have fennel, celery and sorrel to plant, tomorrow celeriac. I will be sowing the early tomatoes and the peppers this coming week, as well as leeks and chives, the previously mentioned onions, then towards the end of the week another round of broccoli, cabbage, lettuce ect. Busy!

Busy but good. It’s been fun so far, and hopefully it will stay that way. Having stayed busy all winter with land clearing/firewood/home rehab I have had no problem stepping up the energy a bit for veggies, in fact I have opted to try and continue to process firewood “in my free time"(ha!) just to give me a break from planting-The greenhouse work being more mental, getting on the wood splitter at the end of the day is kind of like going to the gym, without the possibility of meeting a buff, sexy and interesting person to have a drink with after working out. Maybe I should just get a gym membership!

I managed to survive another trip to Orlando with Stephen Jr over his Feb school break, not only survive, but have a lot of fun-we stayed away from all the theme parks this time, and did a bunch of pretty cool day trips-the Brevard county zoo and the Orlando science Museum where among my favorites, and a trip to Dinosaur world in Plant City offered the bonus of being in the strawberry capital of Florida.  We stopped at a couple roadside stands and ought some fresh picked berries as well as my favorite, boiled peanuts. The strawberries where pretty good, but not as ripe/sweet as what we get up here during strawberry season, the reason being is that the majority of the berries there need to be picked so they can be shipped, which means picking on the less ripe side, they are then forced air cooled which stops further off the vine ripening, giving them the longer shelf life needed in order to ship them, but denying them the chance to develop full flavor. Picking on the under ripe side reduces grower losses in the field, speeds up picking and increases plant productivity, which is why you pay more for good, local vine  ripened berries, when you pick them ripe, as most growers do here, they are a far more perishable commodity, and the crop losses caused by picking such tastier fruit justify higher prices. The boiled peanuts rocked as usual, so much so that I am looking for a source of seed so I may grow the green (immature) peanuts needed to make them. We will see what happens.

Anyway, I have got to get Stephen his breakfast know then get up to the greenhouse and start planting, but before I go, I do need to mention that I still need to sell some more shares, and I have attached a poster that you can print out, perhaps you can hang it up at work, your gym, yoga studio, watering hole ect-if so it would be much appreciated. Or if you are getting this newsletter and have not yet signed up for the season but have been meaning to do so, go to parkerfarm.org and claim your share today.

Awesome. Spring is here!! As much as I enjoyed my 110-year record-breaking 71 degree day yesterday, I'm glad we have some rain today. I was curious about how the lack of snow fall would affect ground moisture and planting. Let's hope for some more moisture this spring.

Thanks for sharing, Cornelia!