Accidental farmers: Back to the Roots 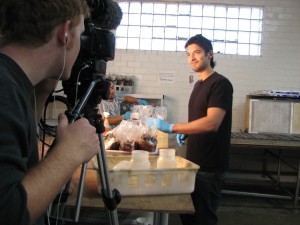 Neither Alex Velez (pictured above with Andrew Monbouquette) nor Nikhil Arora had any idea how to grow food before they met. But in the past couple of years the two cofounders of Back to the Roots have become known as “the mushroom guys” for figuring out how to grow oyster mushrooms out of spent coffee grounds and then finding a market for them.

We visited them in their new factory in West Oakland, which has the advantage of being close to the Peets Coffee outlets that supply them with 20,000 pounds of coffee grounds every week. The factory was in full thrum, as workers packed small bags of ground coffee with mushroom spawn, or seed, and slid them into consumer-friendly boxes for grow-your-own-mushroom kits. The appealing packaging is no accident. “People want to grown their own food but they don’t just want a bag of fungus,” says Arora, “We had to make it look good.”

They’re hoping customers will flock to Home Depot and Whole Foods this season, just a couple of the stores that have signed on to work with Back to the Roots, and find in the kits a perfect holiday gift for their kids, or urban farmers, or people who just like the idea of making a mushroom dish from scratch, as it were. Each $20 kit is expected to grow 1 ½ pounds of mushrooms.

One “gorgeous” bucket of mushrooms

The story of how Back to the Roots came to be is now an established part of company lore, related several times over in the press (these guys have gotten noticed!). Velez and Arora, both 24, were business majors at the University of California at Berkeley who didn’t know each other before attending an ethics class and hearing the professor tell them that mushrooms can be grown in coffee grounds. Both took note and both followed up with the professor afterwards to see if he had any more information. That’s when he suggested they meet.

In the spring of 2009, the last semester of their senior year, they concentrated on figuring out how to grow mushrooms in coffee, turning to YouTube and any other source they could find for help. After spending more time elbow-deep in coffee mud than they care to remember, they finally produced 10 buckets worth of coffee-fueled mushrooms. Nine of the buckets became contaminated. But the 10th was “gorgeous,” says Arora, and they rushed it over to nearby Chez Panisse, the most well-known restaurant in Berkeley. “We thought, why not start at the top?” says Arora.

Serendipitously, founder Alice Waters herself just happened to be in the kitchen. After she’d tasted the mushrooms that her head cook chopped up and sautéd for her, she asked Velez and Arora to bring her some more.

Fortified by Waters’ powerful thumbs up, and figuring they had nothing to lose, the guys rushed the same winning bucket over to Whole Foods where the produce manager also took an interest in this new version of sustainably grown mushrooms.

Suddenly their cool kitchen science project started to seem like a promising business idea and both guys soon turned down the jobs that had been waiting for them post-graduation – Velez was bound for investment banking and Arora for consulting – to become full-time entrepreneurs, and mushroom farmers.

In for the long haul

They’re working from 6:30am to 8:30pm almost every day of the week, have 19 people on the payroll, and a sometimes scary-huge inventory of bagged mushrooms to sell. But they have absolutely no regrets about the choice they’ve made and see even more potential for growth in their future.

“This grow-your-own-food movement is no fad,” says Velez. “Look at us – we gave up conventionally successful jobs to become farmers.”