Are you an "Extremist"? I prefer Rebel Gardener!

The time to sit idle is history.  Do you grow your own food?  Do you believe in making the world a better place for you and your family?  Do you have strong religious beliefs?  If you answered yes to any of these questions, the US Department of Defense considers YOU and "Extremist."

From documents obtained from the DoD:

A statement
that “Nowadays, instead of dressing in sheets or publically espousing
hate messages, many extremists will talk of individual liberties,
states’ rights, and how to make the world a better place.”

Under types of extremists:
f. Eco-Warriors

– Environmental activist’s who take
action to fight against the exploitation of the environment and/or animals. An
eco-warrior can be someone non-confrontational, such as a tree-sitter, or
someone who engages in direct action.
Under the section, "Extremist Ideologies," the manual states, "In U.S.
history, there are many examples of extremist ideologies and movements.
The colonists who sought to free themselves from British rule and the
Confederate states who sought to secede from the Northern states are
just two examples."
If I read that correctly, they are saying that THE FOUNDING FATHERS OF AMERICA were extremist or terrorists!
Has our current government completely forgotten about the VICTORY GARDEN movement?
What's a Victory Garden? From Wikipedia, "Victory gardens, also called war gardens or food gardens for defense, were vegetable, fruit and herb gardens planted at private residences and public parks in the United States, United Kingdom, Canada and Germany[1] during World War I and World War II to reduce the pressure on the public food supply brought on by the war effort. In addition to indirectly aiding the war effort these gardens were also considered a civil "morale booster" — in that gardeners could feel empowered by their contribution
of labor and rewarded by the produce grown. From Judicial Watch, “The Obama administration has a nasty habit of equating basic
conservative values with terrorism. And now, in a document full of
claptrap, its Defense Department suggests that the Founding Fathers, and
many conservative Americans, would not be welcome in today’s military,”
long-serving JW president Tom Fitton said. 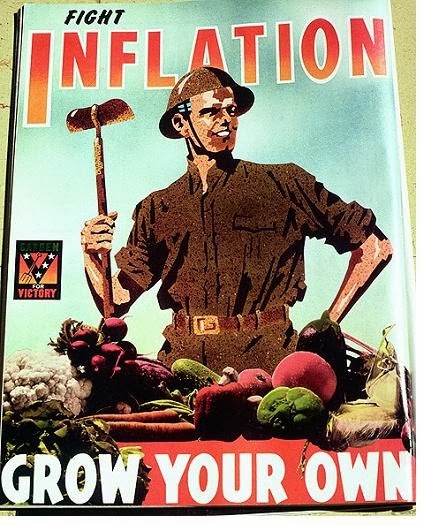 This isn't the first time the federal government, one of its agencies or
some other "official" source has equated freedom-loving Americans who
have an originalist view of the Constitution and its meaning with extremists.


In light of this information I am taking a stand and I invite YOU to do the same.  Today of all days is the PERFECT day...It's President's Day!


Today I will:
-SHARE this information on every social media outlet and with friends and family.


-I am going to out to my garden to plant more veggies.

-Start a trend on Twitter #growyourown
I would love to hear from YOU about what we can all do to get more involved.  If you write a post about this very topic I will also share your link everywhere.  Just leave your link in the comments.

Anyone who can tie their own shoe without Big Brother's intervention is considered an extremist these days it seems...