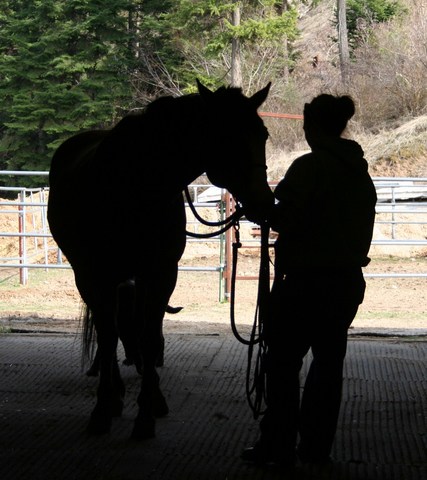 When I was a kid, I lived in the country and was raised "country style". We didn't have PSP, Wii, or computers. We grew up without cable TV, surviving the Friday night Hee-Haw episodes.  We drank water out of garden hoses, rode our bikes without a helmet, and dug our bare toes into the tar bubbles on our old county road.  We played Hide-n-Seek til Mom whistled for us after dark. We played outside, rain, snow, or shine.  We spent summers out at Grandma & Grandpa's house hoping that Grandpa would decide it was time for a road trip to nowhere.  There was Heritage Days in Amboy, Territorial Days in Battle Ground, and the Clark County Fair came to town in August. We lived a great childhood and were raised with down-home country style disipline. And we survived all that and grew into good people.... Amazing, huh!

As a kid, my life consisted of mainly one thought... H-O-R-S-E-S. It was the ONLY thing that I ever wanted and never got as a kid. Though I have owned several in Adulthood, I never had one as a kid. So........ all the neighbors' horses became mine. For many years, I carried a D-Ring Snaffle bit with me wherever I went... it folded up and slipped into my pocket quickly. The headstall was no problem as the bales back then were made with twine rather than wire. My first "victim" was a couple of pastures up from our house. I had scoped it out and knew that no body ever did anything with a gorgeous appy POA. I rode him for about a year. The people eventually discovered me, but, never stopped me. I would brush him down before turning him back out, refresh his water, and put 2 flakes of hay in his rack. One day I went into his stall to find his own bridle and his brushes.

The first real "Horse" job I got came from stealing (I called it borrowing cuz I always took them back.... well, almost always, but, that's a whole other story) horses. 5 people rode up to my house.... on their horses. I heard Mom call me, saying that she was sure that there was someone there to see me. I went outside and they asked me to work for them so that I would quit stealing their horses.

Back when I was a kid, things were so easy... so simple... so carefree. We could be kids back then. Catching frogs & tadpoles, fishing, running amuck in the neighborhood, barefoot and free as the wind. I wouldn't want to be a kid now days... nope, not me. Too many gangs, violence, and mayhem. Kids of today (most of them) are put under too much pressure by society to hurry up, grow up, succeed in your life. They aren't allowed to just be kids anymore. I believe that our kids should learn the importance of knowing how to actually cook a meal & not just turn on the microwave... they should learn the things that could sustain them in hard times.... growing a garden, baking bread, raising chickens, etc. Ok, so maybe it's just a dream.... but it's a big dream and a good dream. I know that there are more and more families that are raising their children on traditions that have been passed down through the families, generation by generation. It is always nice to have a slice of Grandma's homemade bread even though she passed away in 1989.

I am Thankful to have grown up in the time era that I did. I am Thankful that my Ol' People raised us kids to appreciate all things... I truly love the little things in my life.....  like running through the neighborhood barefoot and being a Horse Thief.

Comment by dixiebelle on May 14, 2011 at 6:37am
Oh fantastic blog post! I was right there with you, 'borrowing' that horse! You write so well, I would read a whole book with stories from your childhood... thank you for sharing!

Comment by Christene Graham on May 14, 2011 at 1:57pm
Thank You, Dixie! That was an awesome comment and I greatly appreciate your thoughts. I have always wanted to write and I'm kind of trying it out here while I meet new people and gather information about gardening & homesteading. I will use my writing experience to make ends meet (I hope!) when we make the move to a homestead! Combined with my photography, I might just be able to make it work.