Denial is a powerful thing….for weeks, we have been looking at the peeps as they grew into peepsters and pondering Betty Lou. She was bigger than the other Barred Rock; her comb was a brighter red and more pronounced; her peep chest butts were more forceful than the others. But, I just thought “She was born a few days earlier.” Or “She has a stronger personality than the Buff Orpingtons. Barred Rocks are a more aggressive chicken, after all.” I never thought—is she a he?

You would think we would notice sooner, but it’s been a busy few weeks and the peeps are just a small part of the daily routine. Take them out in the big blue tub at seven in the morning and pop them, one by one, into the cold frame under the plum tree. Make breakfast, pack lunch, go to school and take another whack at the huge pile of junior assignments on my desk. Come home, make dinner, check the transplants in the garden, read a bit, move peeps in when it is growing dark so that they are easy to catch.

Yesterday, however, the whole situation came to  the forefront of my attention. I moved the hoop of fencing that they run in to the far back yard, right against the chicken run, thinking that eventual flock integration might go more smoothly if they saw each other first (hope springs eternal in raising chickens). This meant that The Ladies, Gladys and Henny, were exposed to the peepsters for the first time and they were Not Happy. They squawked “My Yard! My Yard!” for five hours, until they finally lost their voices and were distracted by an overgrown sprouting and flowering broccoli plant.  It was a long morning. Meanwhile, the peepsters ran around singing “peeps just want to have fun” while snapping at flies, shredding newspaper, playing King of The Blue Tub, and munching on their own broccoli plant.

At dinner, Mark raised the issue—how do we know we have a rooster? I fetched our Raising Chickens book from 1975 and we studied the notes. By eight weeks, it read, you will see wattles and comb. Hmmm….we walked to the back. There they were. “Looks like wattles to me,” Mark observed.  “I think Betty Lou is Billy Lee,” I added. “Now what?”  We went back to dinner. We don’t want a rooster; there is enough noise in the neighborhood already. We want eggs.

Maybe, I thought as I popped them back inside last night, we are wrong….maybe Billy is Betty…just a little bigger than the others. But, I doubt it. Those wattles are pretty red. 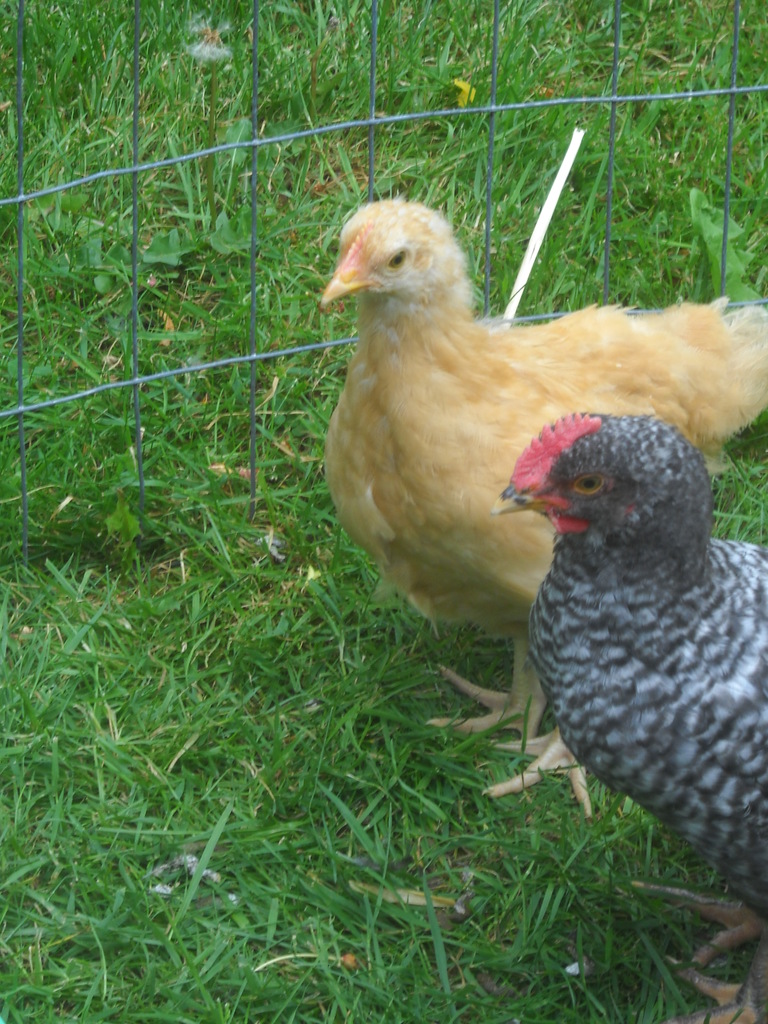 If only you could ask him/her—although that would be a fairly delicate conversation. And, I suppose, the writing is already on the wall or, rather, the wattle is on the rooster.