We've been on an insatiable Indian food kick lately, at least before I started the detox (wheat is back in, dairy comes back tomorrow).  I can't get enough of it.  It is definitely one type of cuisin… 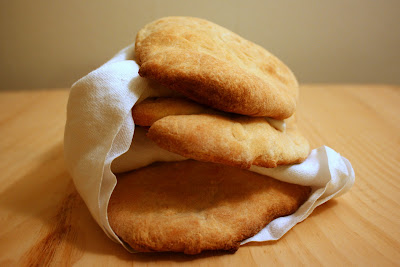 We've been on an insatiable Indian food kick lately, at least before I started the detox (wheat is back in, dairy comes back tomorrow).  I can't get enough of it.  It is definitely one type of cuisine that tastes much better from a restaurant than from our own kitchen.  But when we are too embarrassed to show our faces yet again at our local Indian establishment, we try our best to recreate the wonder at home.  And recently, I gave homemade naan a shot. 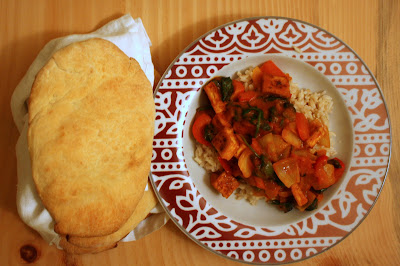 I got this from a book called The Bread Machine Bible, and unfortunately I returned it to the library without copying down the recipe.  But fortunately, it wasn't that great so you aren't missing out on much.  Although in fairness, I know I messed with the recipe a little bit (used part white whole wheat flour and Greek instead of regular yogurt) so perhaps that was the problem.

Verdict:  it was too much like regular bread and not enough like delicious naan.  The mixing and kneading of the dough was all performed by my bread machine and then I shaped the loaves by hand and allowed for a final rise before brushing them with melted butter and baking in the oven.  They were definitely good, but not quite authentic.

Has anyone had really good luck with making naan at home?  I'm not above ordering naan from a restaurant to serve with a homecooked meal, but it would be great if I didn't show my face there every single week.  You know, for pride's sake.  Also, has anyone made pita?  My doctor friend learned to make chappati in Kenya, but he never taught me the recipe.

Comment by Susan Himmel on January 15, 2011 at 12:16pm
Love naan, but haven't made it from scratch yet. It certainly looks yummy here!

Yeah, naan seems to be one of those things that's a real art... Isn't there some charring that makes it tasty, too? Chutneys and relishes are another thing I'd like to try!

BTW, how was the detox? Details?

My friend just posted her naan recipe... some charring is definitely needed.  Looks like making it on the stovetop is essential!

The detox was great! I am a featured blogger for it here at the Whole Living website and a little bit at my personal blog.  It was a food-based detox aimed at cutting out some of the most common allergens (dairy, eggs, soy, wheat gluten, caffeine, alcohol, added sugar) and then slowly reintroducing some of them in to see what effect they have on your body.  I've now reintroduced just about everything, but am way more conscious of what works and doesn't work (too much cheese!) with me.  Maybe I can write up a post about it here.  It was part of Whole Living's Action Plan.