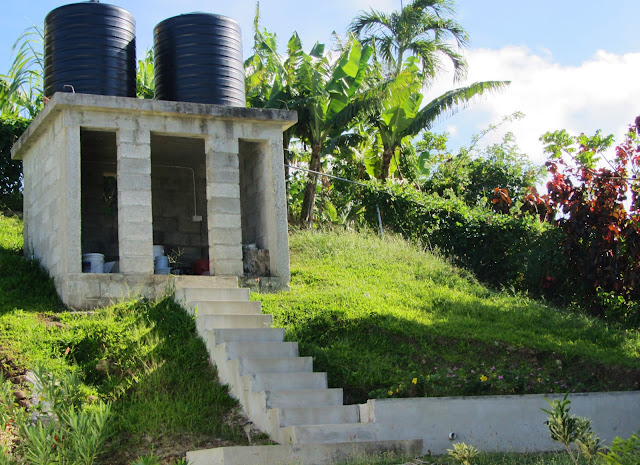 My experience thus far has been that when the island has high or sudden rainfall, the reservoir gets filled with silt and debris as water thunders down the mountainsides and rivers burst their banks. The result is heavily muddied waters and the need to close down pumping stations whilst the mud settles...hence no mains water.

Coupled this year with a further complication - it seems that following the passage of Hurricane Tomas, the water company believed it had removed much of the silt that had settled in our main dam/reservoir and that all was hunky dory. However, as water levels have dropped through this dry season, they have become acutely aware of the fact that a 20ft depth of what they assumed was safely stored clean water, is in fact 20ft of mud!  So a re-hash of calculations means the possibility of two things:

- if it doesn't rain soon, they will run out of water much sooner than anticipated;

- if it does rain torrentially, the silt will be disturbed and the water will require additional handling before it can be pumped.

- Either way, there are likely to be disruptions to supplies.

So, my efforts (and budget) this week have been rallied around the issue of that all-important and magical resource that we cannot do without - WATER!

Et voila! The completion of a much-pondered solution; a pair of gravity-fed water storage tanks are now purchased, plumbed and filled with 1200 gallons of water.  When full, the system will auto-switch to sending mains water direct to the house.  I know this is all very obvious to many, but growing up in the city meant I never had to think about where my water was coming from - it was just there whenever one turned on the tap.

The next major water projects include:

-  the creation of a rainwater-gathering system. This may have to be as simple as some rain barrels for now as to build a proper concrete, plaster-lined cistern would be too costly at present

- then there is the question of water for the new veggie garden which is some distance from the house, so requires a deliverable short-term plan for both a mini rain-water gathering system and piped mains water if I am to grow anything.......seems I shall be a very busy bee in these coming weeks.

In the meantime, having chosen the highest point on the whole plot, the tanks are fully operational. My eldest brother, who is an electrical wizard, kindly installed a pump for times when levels get very low - but for the most part, the high position and gravity will do the job very nicely and the pump will get very little use (hopefully).  At last, it seems there is some benefit to this very steeply sloping site!

When time and resources permit, I shall ask Handy Andy to plaster the blocks and add lattice doors and "windows" to prettify the structure, but right now, as far as I'm concerned it's a beautiful sight and will mean that I won't have to go 15 days without water as I did the last time they shut down the pumping station.

Wonderful! Yes, it's definitely all too easy for us city folk to forget  how precious water is when all  you have to do is turn on the tap for an "endless" supply. That's a very cool system you've got there!

Thank you Aliza - as I say it all seems so obvious to many. There is of course the issue of cost in installing something like this, hence why this weekend there was a line of residents at the standpipe in the high street.....for many, no water being piped directly to your home can simply mean no water at all!

Thanks Penny - quite a few people here have the concrete cisterns under their house (sometimes the footprint of the entire house) but I didn't discover this until it was too late e.g. the foundations were down and actually find that thought quite scary!

I saw something recently from India where they were building one, so will try to find it and share.   My thoughts are just making one about 6ft x 4ft x 4ft deep and have the main downpipe from the roof feed straight into it with an overflow pipe.  You can either use it as is for gardening and outdoor applications or add water purification tablets if you want to use for cooking & bathing.