This past winter was the first for my flock of chickens.  The previous spring I hatched them in my house and raised them in a kids plastic swimming pool until the weather warmed up enough that they could move outside to their newly built coop.  They spent the entire summer grazing in the yard, taking dust baths, and enjoying scraps from the kitchen.  What a life!

That is, until we received RECORD snowfall this past winter.  Blizzard after blizzard amounted in almost 6 feet in January alone (previously unheard of in southern CT).  Unfortunately, the snowfall came as even more of a shock to the chickens.  They complained endlessly for freedom and fresh grass, but couldn't bring themselves to step out of the coop into the white abyss.  No amount of coaxing with scratch or gentle encouragement could change their mind.  And they were not to be fooled by the hay I lined the paths with in an attempt to convince them there was solid ground.

Thankfully, I've always found my girls to be more creative than I give them credit for. 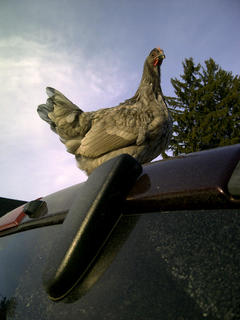 My Blue Andalusian hen finally mustered up the courage to fly all the way from the coop to the top of my neighbor's car. 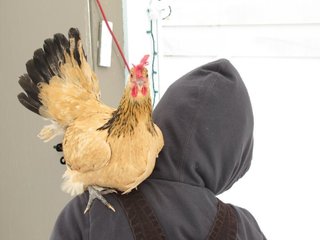 And one of my Golden Lakenvelders decided it would be best to hitch a ride, flying up onto my shoulder. 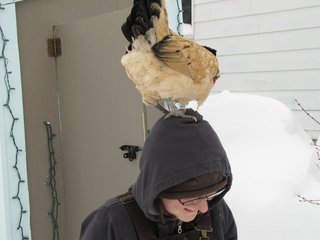 Though she eventually realized there was a much better view from my head.

Needless to say, the flock eventually "warmed up" to the idea of snow. 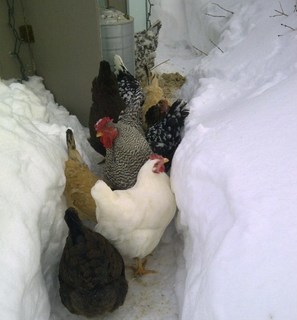 And even realized the joys of eating it!  Free snow cones?  Hooray!  Though I can't imagine what that brain freeze felt like...

Love this. You win in my book.

Love this. You win in my book.