HOMEGROWN Weddings - been to any?

I have - mine! It was a magical day, complete with a canine bridesmaid, sliced watermelon and a whopping late-night rainstorm that had us all dancing on water. We set up a big tent in the yard, sourced much of the food and drink locally, we enlisted the help of some of our food superstars for potluck salads and sides, filled a canoe with ice for drinks (an idea from Laura and Vance's HOMEGROWN wedding in 2008), there were games on the grass for kids (big and little ones), and a kickin' soundtrack built using the music collection at home. 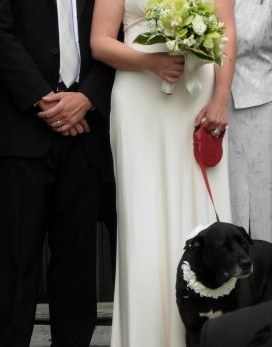 ^^That's our dog, Iris. The rest, I'll leave to your imaginations.

A sampling of the menu and contributions from the program:

Potato salads from Hilde and Amanda

Wine and beer came through dear friends with good connections - the Harpoon beer was brewed in VT, too!

Floral design and direction by Matron of Honor, Jen. Bridal bouquet by St. Sue, with lots of help from Kathy and Amy

Sound system provided by our favorite tour manager, Brendon Downey. Dirty Projectors can have him back now.

The soundtrack for the evening came entirely from our music collection and was assembled by the groom.

I'll post some of the playlist soon, but it ran the gamut from Frank Sinatra and Aretha to Tone Loc and The Hawaii Five-O theme song to The Dead and Zeppelin. Good times!

Have you been to - or had your own - HOMEGROWN wedding? I want to hear about it!

Comment by Margo Rehm on July 23, 2009 at 11:24am
Our wedding is green and American made, but not homegrown. All local foods, organic linens, seasonal local flowers, registry w/Amazon.com for latest and greatest bamboo bedding! Cheers to your new family!