It's Going to Be An Active August!

Well, the inspections for the bank and local municipality have been completed, and all of our rehab work has been approved! We're just waiting on the final disbursement check so that we can pay our roofer. It has been quite the ordeal, but well worth it a little headache and a lot of elbow grease in the end!

I had mentioned before that our riding lawnmower had quit... Well, this past weekend, we were given a riding mower, which we desperately needed, as "payment" from a friend of ours for helping install some new windows in his home. It's an old vintage Snapper, much like the one Forrest Gump rides in the movie. It cuts great and is fun to drive. It was really a blessing! And, thankfully he also gave us the old windows for various projects, because we came home last Saturday afternoon to a head-butted out barn window, courtesy of Houdini... It's going to be an active August for sure!

We've had some really strange weather this past week or so up here in SE Michigan. Last Saturday we went to the Lenawee County Fair, and it was so chilly we left early!  It's been in the high 70's for almost 2 weeks now. After that week of 100 degree weather, I guess I really shouldn't be complaining. The Roma Tomatoes, which are loaded with fruits, are nearly ready to harvest, and we picked our first Zucchini on Sunday. I just KNOW the minute we go to pressure can our sauce it's going to be in the 90's again...

Speaking of canning and preserving, my Dad, who planted 2 weeks earlier than we did, brought me a basket load of zukes, squash, cukes and about 5 lbs of bush beans. With the shared bounty, I was able to make 5 quarts of Dilly Beans, 1 quart of Dilled Mixed Vegetables, 2 dehydrator trays full of zucchini, and 3 trays of summer squash! I had some jalapenos I'd purchased earlier in the week that were starting to get soft, so I threw those in the dehydrator as well. 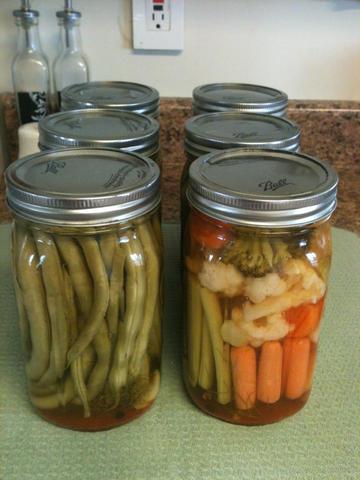 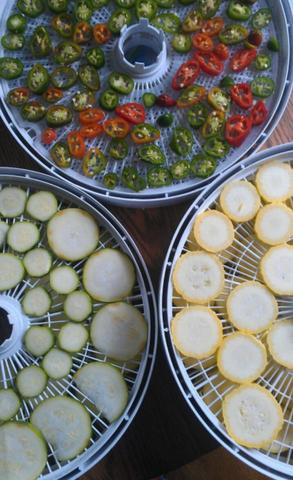 Since we moved out here in February, I've been saving all of the glass jars from purchased goods to store my homegrown dried goods in, as well as cartons for our hens' eggs, and so far, it's been working out well. Nothing fancy, just use a permanent marker to write the item and date on the lids. I could use several more, really. We also have 2 surprise apple trees out in the established orchard, from which I'll be making boatloads of Cinnamon Apple Chips. That said, I am also still in need of another 2-3 dozen pint jars for tomato sauce and another dozen or so quarts for beans and cucumber pickles...

Besides all of the produce, we're getting a solid 3-4 eggs per day from our 5 oldest ladies, although Athena, our huge Black Jersey Giant, has proven to be very adept at hiding eggs... We found a nest with 8 of them behind the wood pile, moved those, found 4 more over there and brought those in, but haven't seen any again since Sunday. I expect the Rhode Island Reds to start laying in the next couple weeks, and the Barred Rocks in a month or so. There is still some tension in the coop, but they're getting along well enough. The oldest 5 run together, and the younger 4 have their own club, although "Pecker", my friendly leghorn, seems to be the "diplomat" for the 2 crowds. All of them come running when they hear me come out the back door.

Besides picking, cooking, canning and dehydrating, there are some other small projects we want to complete in the next couple months before winter hits. It's definitely going to be an active August around here!

LOVE the colorful jars of goodies!