What a surprise for me tonight when I dug up a potato after I had assumed my potato adventure this summer was a failure.

After battling Colorado Potato Beetle's back in April by picking them off and removing any leaves with eggs, I thought that I was doing pretty well.  The plants were flourishing.  Green, bushy and quite healthy looking.  However, not knowing very much about what to look for with potato plants, I started to notice the leaves getting spots all over them.  This was in June: 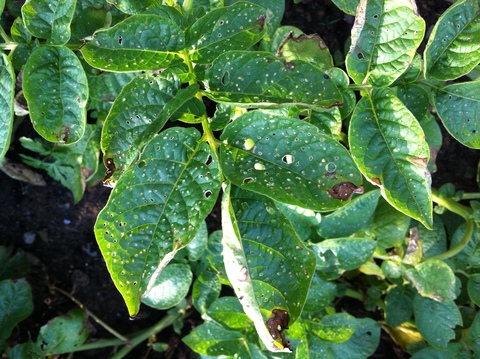 I thought perhaps that I had some sort of deficiency in the soil for the leaves to start looking that way.  Anyway, as time went on, the leaves started to look worse and die off.  What at one time looked like a flourishing crop of healthy potato plants, started to dwindle down to a sickly looking patch.  Discouraged, I gave up hope and wrote off my potato trial as a flop.

Then the other day I decided to research what exactly are the signs to know when it's time to harvest potatoes.  What I found out is that the plants die off and when they all die, then it's time to harvest them.  I figured it couldn't hurt to just check it out to see.  After all, I was going to have to clean up the potato failure anyway.  So tonight, after picking some parsley for our rabbits, I took out a hoe and gently started to dig down into the earth.  After going down about 6 or so inches, I hit something red.  Could it be?  Digging a bit more, sure enough, there in the soil was a red potato.  And not just a wimpy little rotten potato, but a big, bright red healthy potato!  Excited I ran in the house to tell Mike of my discovery.  All through dinner I thought about the treasure waiting outside for me.  How many potatoes where there??

After dinner, we went out with some bags and started digging.  Being ever so careful not to cut into any potatoes. 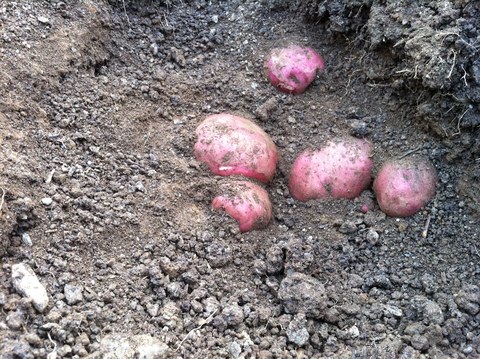 Mike and I had a ball uncovering the "fine fluffy white potatoes" (must be said in an Irish accent). 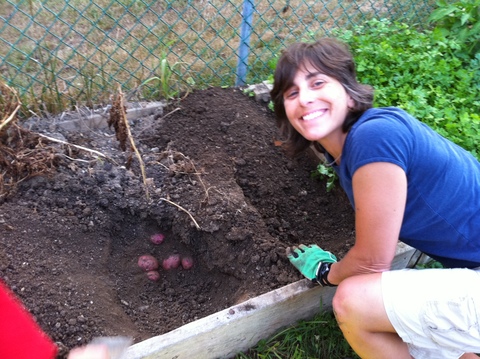 And after about 1/2 hour we had about 25 lbs of red gold.  We know what we are having for breakfast tomorrow! 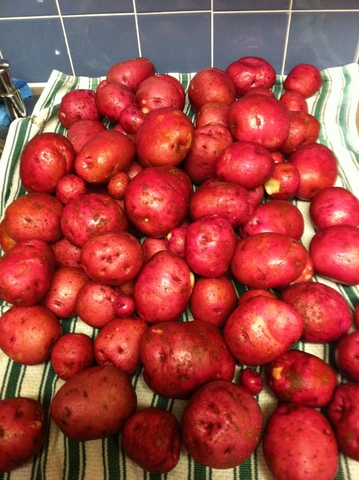 So what I thought was a failure, turned out to be a great success.  I hope that my sweet potatoes do as well as my red potatoes did.  I'll keep you posted!

Comment by Caroline Malcolm on July 11, 2011 at 3:08pm
These are lovely! Well done! Hope the sweet potato harvest is just as sweet :)

ok so the potato plant that is above ground should die before i try harvesting what is below soil level?

Hi Ericka!  Yes wait for the plants to die off before you harvest them.  Good luck and enjoy!

A letter from Willie Nelson: “We’re all in this together, and together we’ll help each other through it.”

Updates from the Farm Aid Bandwagon