Prayer Warrior Chain For The People Of Boston 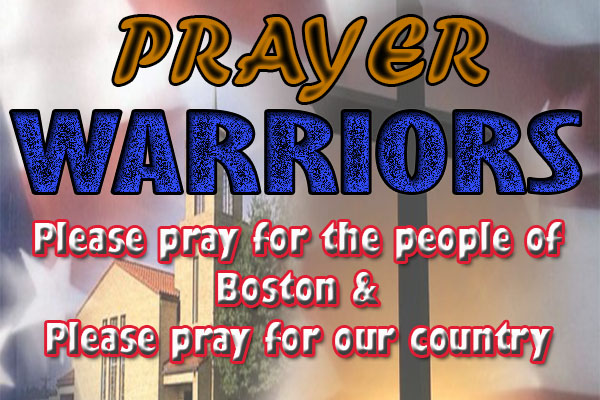 I come to you tonight very sad for the people of Boston affected by these horrendous explosions today. I was reading about it on Yahoo! earlier this evening and it just makes me sick to think about the awful things somebody is doing to our brothers and sisters in Boston.

Why does the government continue to let their guard down here at home and allow these things to keep happening? That is all I am going to say about the politics of this whole situation. I am not a POLITICS kind of person.

These bombings in Boston are absolutely terrible. The last I read there were two deaths (one of them an 8 year old baby) and 130 injured? The reason for my post tonight is to bring everybody across the country together in prayer. As I am writing this it is now 1030pm central time. I want everybody to come together at 11pm central time to pray for the people of Boston and pray for our country.

Something has to happen because America has changed. Our great country is in a terrible situation and it is going to take us asking for God to help us through this.

Please send this to all your friends!!

You couldn't have said it better - There is so much disregard for human as well as animal life, soil preservation, etc. in this country that simply comes down to GREED that it makes me ill.  It is sad to have to say that I only watch the news to see who needs our prayers and not for much any other reason nut the weather forcast. I have no interest in who is dating who in Hollywood or as they call it Reality TV. We need to start caring about and helping each other before we as a country destroy ourselves.  Count me in the Prayer chain.

You are so right Karin. We definitely need to care about and help each other. Our country is in trouble. We are out trying to feed and protect all of these other countries and don't get me wrong I know they probably need help but what about the folks right here at home? We have families and children starving everyday right here at home and nobody even seems to care. Am I wrong about that?

No Travis, you are not wrong! I have been saying the same thing for years as at young age I became involved in a Native American Indian Group and we fund raised and donated tirelessly for Indians on the reservations who's homes were being destroyed because Piedmont Coal Co. wanted the minerals off of their land. The government sided with the coal company ( Duh? who else would they side with ... they have a history of breaking promises to these people) and they killed their sheep, removed teachers from the reservation and I even saw photos of US helicopter flights burning their homes. We finally got all of it stopped with a petition and sent several tractor trailer loads of food, clothing, school books, etc to that reservation. Our country seems to help everyone but their own and the natives who this country originally belonged to. Oh yeah - and if you come to this country illegally ... you have more rights to assistance than you or I who were born here and paid taxes to this country.