Finally, a break in the huge system that has hung over our tiny island home these last two weeks (though I believe it is only a temporary respite).

A combination of dry weather, and the appearance of Handy Andy - something akin to the alignment of the planets, we finally managed to make some progress on what had become a fenced off quagmire, and new home for the local frog population, safe from dog-kind.

With the wood for the two raised beds duly installed, Handy Andy began the unenviable task of hauling the huge pile of delivered topsoil from the side of the drive, up the steep slope and across to its new resting place.  Sadly, it was not until this moment that I was able to get a really close look at the quality of the soil, which turns out to be a heavy clay, made ultra sticky and dense by the recent heavy rain. No bagged, graded or carefully prepared soil here! It's a case of Russian roulette and you take what you can get, huge boulders, tree roots and all.

No matter, an application of composted leaves, grass, wood chippings, and possibly some well-rotted seaweed, gathered on my next trip to the beach, should bring it to the quality that I had hope it was.

So, leaving Handy Andy to complete this soil relocation programme, I headed out to run some errands and get supplies for the old folks.  A couple of hours later, on my return, excited to see how things were shaping up, I hurried to check the progress.  It seems that:

a) my communication skills in the local French Creole is poorer than I thought;

Thankfully, he had only filled part of this lower area, so I managed to stop him in his tracks, aided by an unexpected and sudden downpour which brought the work day to a convenient close.  Returning today, I've re-directed him to a new task on the pretext that this other job is more urgent.

I haven't got the heart to tell him that it is wrong after his huge effort and great pride in managing to shift so much soil whilst I was out.  I will, instead, have to do some adjusting when he is off at the weekend, and explain afterwards that I changed my mind and doesn't it look better? It is so very much easier this way......

So, bottom line, we are making good progress in spite of the heavy weather and the seedlings are more than ready to be transplanted - I hope they can hold on a little longer for the move to their new home. What a labour of love this little vegetable patch has turned into, but I feel sure it is worth it and we will be rewarded with much bounty for sharing and bartering with.

The new shed/gazebo for which I have seen some most inspirational pictures this week (and yes, all are rustic, can be made from reclaimed timber, some of which I have to hand, and within budget ; ) will have to wait a while longer.

In the meantime, Handy Andy's enormous capacity for hard work, has been diverted to another small  retaining wall ahead of the rainy season (proper) and making the shed that houses the gravity-fed water storage tanks, a little more aesthetically pleasing.  In the process, I have added a little platform to the front of the water tank shed, just big enough for a couple of chairs, as this happens to also be the perfect vantage point from which to view the setting sun.  So all in all, a good few days work and another few tasks ticked off the master plan. 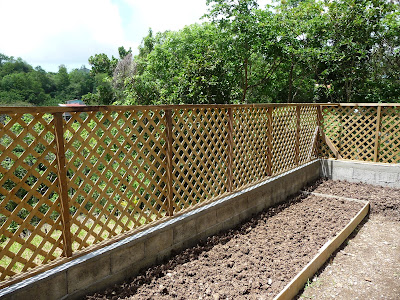 What projects do you have occupying your time and mind right now?