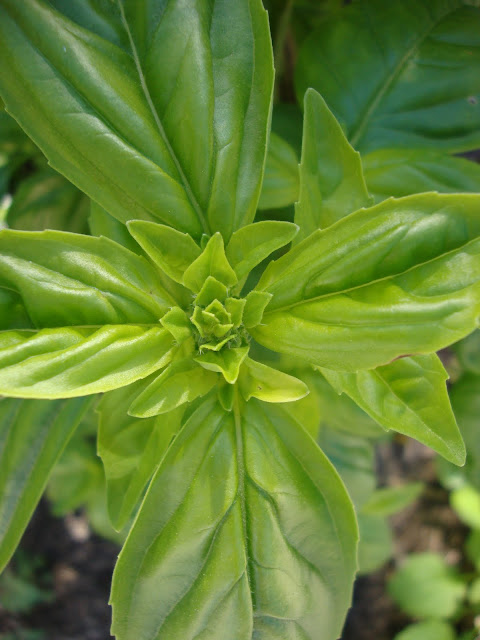 Gardening: it is hard work, this 'grow your own' business, and before I got into it, I really only imagined how wonderful it would be picking basketfuls of fresh vegetables, and making preserves from home grown fruit. It is wonderful, but it ain't easy. There is a lot of ignoring too... ignoring weeds, ignoring pests and problems, ignoring basil waiting to be made into pesto. I love my up close photos of beautiful things in my garden, but in the background, in reality, there is so much waiting to be done, and it will never end! Some days I do imagine how wonderful it would be living in a townhouse with a few potted herbs and a Farmers Market around the corner... but I prefer my own weedy, pest ridden patch of potential. Plus, the hard work is a good work out (I keep telling myself!)

Blogging: some days I get the day started by blogging. It should be something I do after the kids go to bed, or perhaps when they are in school/ daycare before I go to an afternoon shift, or on a weekend, when my husband plays with the kids and I enjoy a cup of tea at the laptop... but no, the truth is some mornings, inspiration hits, or motivation drags, or debriefing is required, and half an hour, is spent on here, while the washing hangs out in the basket rather than the clotheslines, the kids watch ABC kids or ride bikes outside by themselves with me telling them I'll be out soon... or there is gardening that I am ignoring!

Making Friends: I am not good at this. In those personality test thingies, I am an extroverted introvert! I do like to socialise and happily put myself out there, the vivacious one, the introducer, the chatter... as long as I have plenty of me time, quiet time, homebody time, to balance it out. Despite blogging about my life to the world, I guess I am a private person. If I related making friends to relationships, then I guess I'd be the one going on loads of blind dates, hoping to find a soul mate (or two!) but hesitant to take the next step, for fear of rejection, of judgement, of intimacy. Like those singles looking for love, I think the key to finding good friends, is to not be looking. Just let it happen... and in the mean time, I have you, my blog connection, keeping me from hanging out the washing, but also keeping me from feeling isolated!

Building community: Talking about isolation, well, this whole community bonds, community resilience, community groups thing is wearing me out. I've come to this conclusion before, but I just need to look out for my family and myself. Oh, how I want to be involved in a dynamic, interactive, organised group, but there has to be some dedicated individuals who make it dynamic, interactive and organised. It sounds selfish, but it just can't be me. I've tried, I have. Maybe it's like making friends, and I just need to drop my expectations. What I do know is that my time can be better spent on my own family, my own backyard and myself, whether my husband and I find that bunch of like-minded local families or not!

Real Life: here I sit in my ugg boots, yoga pants, watching The Circle and blogging, while my husband has the kids at a playdate in the park, because I slept poorly, have an inkling of a sore throat, and am staying healthy for a big weekend away we have planned. That's real life... the good (weekend away sans kids), the bad (my social life consisting of a laptop) and the ugly (yoga pants being worn by someone who does not have a yoga body)! I love it, though, and that is the truth!

When we come together as a group to speak in a singular voice to say that all this householding and homesteading and punk anything is not only about photo ops or beautiful pictures or personalities or faux families (or the assumption that they are easily forged) or blogging or jam or chickens or nice neat stories but about protest and a burgeoning movement that speaks to alternative systems and economics and a leaning towards solutions as they start, or are best expressed, in our homes and backyards -- at least in their seed consciousness.  When we realize our power, in between the meals and the flowers, we will  find the motivation to overcome our isolation and lose some of the confusion and/or frustration about the reality of this life vs. the images we tend to portray - for good or bad.     At least that's what I think.

I think we householders bring a particular view to the conversations swirling around about solutions to the nut grip we are all in.  We just need to speak as a group and forget the freak'n jam shots even though, I might add, I just finished a dvd on the same.  The point there might be....yes, we must learn to provision for ourselves but for a reason - a very important reason.  At least that's when reaching out and meeting folks and getting over with my self proclaimed crankiness and isolation gets easier.  I hear you Dixie, I hear you.  But via la revolution - one hopeful blog post, chicken photo, egg, jam and diatribe at a time.  We are a movement - damn right we are.

Coming across this - almost a year later - I'm wondering if you have made any inroads or have further insights into the 'building community' part of this post? I'm setting out to put some things in motion around this and would love your feedback.

I absolutely did. I started a group called The Urban Homesteading Club, in our local area. We get together once a month for a social event, plus have also had educational 'workshop' events (making bread, preserving). We have a Facebook page, where we talk, ask questions, share advice, show off photos of harvests, and new members can join, PLUS we use that to send Invites to the monthly events. We each take turns at 'hosting'. It is very family friendly, very diverse and very supportive! We have another GTG this Saturday, with swap table and BBQ. In May, we are hosting again, a Soup Swap. Good luck, hope that helps!

This makes me so happy to hear! How gratifying that must be for you - to have been craving community and wondering how to "create" it, then jumping off and starting a group - congratulations!

I'm seeing more and more how people who stop by here are gathering in their towns and cities and sharing / learning these skills together - offline - not on the web! The web is great for information - to use as a resource - but "life" and "the deal" is really about meeting our neighbors, sharing what's important in our own communities, and, simply, making friends. I'm aiming to make HOMEGROWN.org a resource library (the HOMEGROWN 101s) for folks to use with their local clubs and groups. I'll open this up to everyone in another post, but I'd love to hear from you (and YOU Harriet!) - will HOMEGROWN 101s be helpful to you? For the educational workshops, who teaches? Are there skills that people would like to learn that have no teacher?  How can this online community and web site be useful to your group? Thanks for any feedback and input. I'm so happy to hear from you!

I had tried starting groups before. I had run a Playdates for the Planet playgroup for a little while, and tried a workshop oriented UHC, as well as being involved in several already established groups too. Nine months ago, I was contacted about starting up the UHC again. The second time around, the UHC being more social based really took off. I think the first time I tried to start it, expecting that people would offer to host & teach (or arrange someone else to teach) a skill was too intimidating for people. This time, being able to run the group by Facebook also helped make it easier & more interactive. Plus by then I had built up quite a network after being involved in so many community groups and running a local blog & Facebook page too!

In terms of the 'workshops' or 'skillswap', we haven't worried about it too much, sometimes the monthly host has something specific in their backyard/ homestead, that we are all interested to know more about (bees, humanure etc.) Then we've had people talking about stuff they do, others saying they are interested to learn, and someone offering, hey I can do a workshop about that... and they arrange their own date/ venue etc., and use the Facebook group page to Invite others to it.