In the spirit of our big sibling, Farm Aid, we’re pleased to introduce a new column celebrating that classic duo of music and food. Sound Bites, by HOMEGROWN member Toni Tiemann, surveys what up-and-coming bands are cooking, eating, and drooling over. Got a group to recommend? Shoot Toni a note! 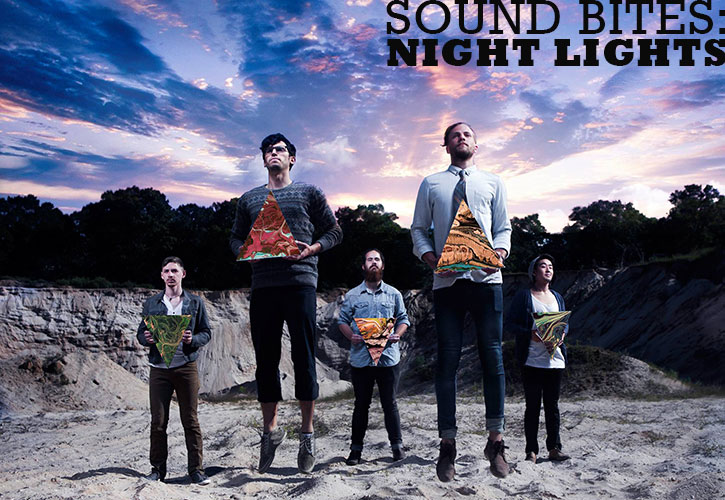 With members hailing from Mexico, Japan, Texas, California, and Norway, the five-piece band Night Lights has roots planted around the globe. The group’s music is equally textured, blending just about every genre you can dance to for a soulful good time. I recently got a chance to talk to fourth-fifths of the gang, who met as students at Berklee College of Music, about the cultural touchstones that have influenced their eating and cooking habits. Four musicians, plus me, on the phone at once made for barely controlled chaos, but it was also an awfully good time—not unlike a Night Lights gig.

WHO’S IN THE BAND

Drew Story: Guitar (Not present for this chat because he’s currently working on a family farm in Tennessee. Yay, Drew!)

Eating on the Road: Discuss.

Yusuke: Before a show, I eat enough carbs to give me energy without making me tired. I also really like healthy sources of fat, like avocado and fish. Mao will always get almonds and stuff [for the road]. I’ll go shop at Whole Foods before and I’ll get a 12-pack of almond milks in single servings.

Mau: Those are very sugary, though. We need to find less sugary options.

Yusuke: We’re all pretty big on protein shakes and smoothies, even when we’re not on the road.

Dag: For me, sometimes when I just practice drums, I’ll take a protein shake after, because it’s such a physical thing.

Jeff: Stay hydrated, lots of water. If you snack constantly, it kind of makes up for the irregular meal schedule.

Yusuke: The first tour I brought about 15 apples, and we ate those throughout the tour. It was nice.

What's the first meal you crave after a tour?

Jeff: I like to spoil myself. I’m probably the least healthy in the band. I have a really fast metabolism, so I can kind of be a fat kid on the inside and no one will know. I like coming back and going to El Pelon, which is our local Tex-Mex spot. It’s still a fairly healthy option, but I definitely go for a meat-heavy, cheesy burrito.

Dag: I’m on the same page as Jeff. I came back from New York yesterday and I went straight to Chipotle. I got a burrito, as well!

Yusuke: A lot of the time, when we get back from tour, I’m so concentrated on getting enough rest that I don’t really think about what I’m going to eat. The first thing I do is sleep and then I wake up and I try to get into the normal habit of things. Usually I don’t have cravings after a tour. Except for sleep.

What about a home-cooked dish you can't live without?

Mau: My dad used to make killer empanadas: tortillas with chicken inside that you cook like a quesadilla but with no cheese in it. You pour a lot of mashed refried beans on it then you put cheese on that and some sour cream. You’d have three of those with a side of eggs, or sometimes you can put the eggs on top. I can’t live without it. Put some salsa on that.

Dag: I would have to go a little Norwegian on this one. Back home in Norway, my mom would make something called potato ball. In Norwegian, it’s called potato klub: potatoes, mashed raw, that you mix with some flour and different stuff. You put a piece of salty meat in the middle and cook them until they’re solid. Then you serve that with tons of other salty meats made in a specific way, but don’t ask me how.

Yusuke: I miss the typical Japanese meal, which is more comfort food. It’s not a fancy thing. There’s not really a name for it. I just like having a bowl of rice, miso soup, maybe grilled salmon or something that’s salted up overnight and grilled, and Japanese pickled vegetables, which are not anything close to American pickled vegetables. [My mom] takes ginger, soy sauce, mustard, and a bunch of stuff. She’ll cut up cucumbers in little tiny pieces and put all of that in the fridge for a while. It tastes amazing. I miss a lot of Japanese food, like tofu—everything healthy really.

Jeff: Being the American in the band, I miss steak. I still have it occasionally out here, but my dad used to grill up steak with fish seasoning from this place called Rudy’s, in Texas. You can order the seasoning, so we’d have it in California. Rudy’s rub on the steak and maybe a glass of red wine. My mom makes this salad with walnuts, cranberries, apple, and mandarin oranges. It’s really good.

Traditional holiday foods: Yes, please, or no, thanks?

Yusuke: For me, being from Japan, I think it’s really interesting that the pumpkin thing is so big here. It’s a new experience. I’m never a sweet tooth, but I’ve been enjoying a lot of the pumpkin sweet stuff.

Dag: I’ll give you my American version. I’m from Norway, but when it comes to food here, for fall, I love turkey. Thanksgiving is my favorite time. I would say when it comes to the whole pumpkin deal, that’s a little overhyped for me.

This interview has been edited for length and clarity. Hungry for more? Get some of Night Lights’ favorite recipes, courtesy of Allston Pudding.