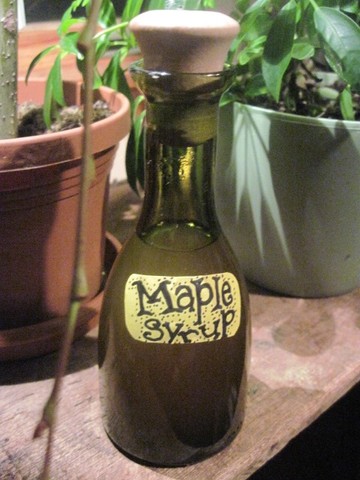 Mapling, or sugaring, is the process of collecting and boiling down the sap from maple trees in order to make syrup. It is an ancient practice, being one of the few sugar sources found in the northern hemisphere. The entire process takes a bit of time, but after tasting the finished product you'll find it well-worth the effort (much better than store-bought “pancake syrup”).

Perhaps you have access to a maple or other sugaring tree that could be tapped?  If so, you can make syrup.  I did, and this blog post explains a bit about mapling and how I went about tapping the two maple trees in front of my house and produced delicious maple syrup from the sap.

We'll begin with the trees themselves.

Sugaring maple trees can be found throughout North America. Below is a map of where they tend to grow. 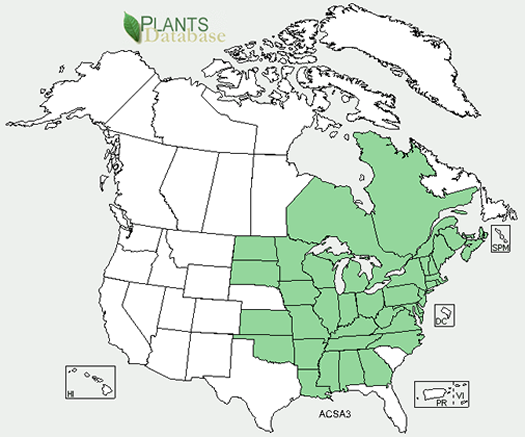 Sap begins to flow and is collected in late winter/early spring, with times varying according to where you live. In order for sap to flow, the temperatures need to rise above freezing during the day and drop below freezing at night. 40 degrees during the day and 20 degrees at night is a good rule of thumb. Where I am in south central PA, zone 6a, I tapped the trees in mid February. The season typically lasts 4-6 weeks.

To get started, you need to identify trees to tap. There are several varieties of maple trees that produce sap that is suitable for syrup—sugar, red, silver, black, and box elder. Sugar maple sap contains the highest concentration of sugar followed by the red maple. Besides the maple family, other tree species that produce sap suitable for syrup include sweet birch, sycamore, walnut, and hickory.

Identifying the different types of maple trees involves the color and shape of the leaves as well as the texture of the bark. Here is a nice visual guide to identifying sugaring maples.

From the color of the autumnal leaves as well as the bark texture, I identified the two big maple trees in front of our house as red maples.  I'm glad I took this photo last fall to use as a reference! 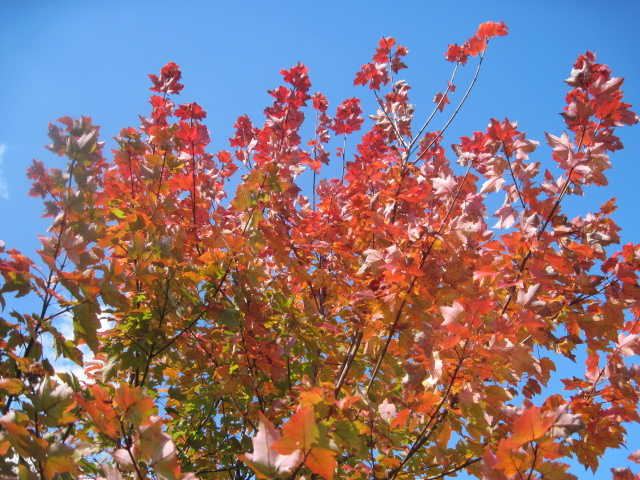 After identifying the trees, the next step is to tap them. This involves drilling a hole into the tree and inserting a spout, or spile. Spiles can be purchased during mapling season at some local hardware and feed stores, or online. Spiles can also be made from PVC or other materials. If you choose to make spiles out of copper tubing, definitely make sure to remove them from the trees at the end of the season to avoid poisoning the tree.

Only tap trees 12 inches in diameter and larger. One to three taps can be inserted into the tree depending on its size, but with smaller trees, stick with one.

Below is a photo of the tools I used to tap the trees—spiles, drill, rubber mallet, tape measure to measure drill bit depth, and masking tape to mark the depth. 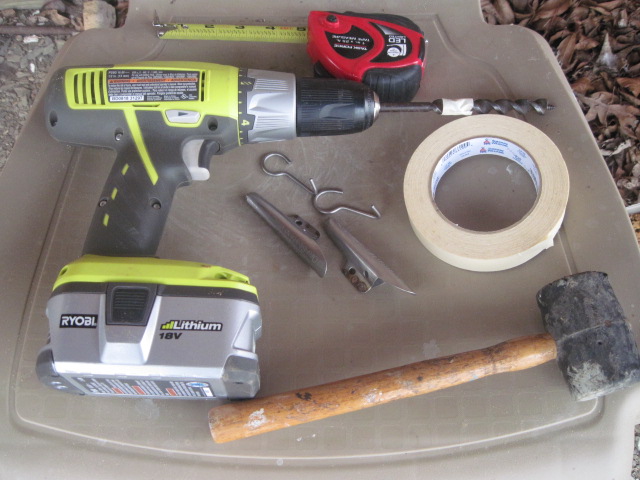 Most commercially made spiles require drilling a hole with a 7/16 inch drill bit. Mark the tape about 2.5 inches in depth. Drill at about waist height on the tree, drilling slightly upwards to help the flow until you reach the 2.5 inch mark on the drill bit. Insert the spile into the hole and tap a few times with a mallet to secure and seal the spile. 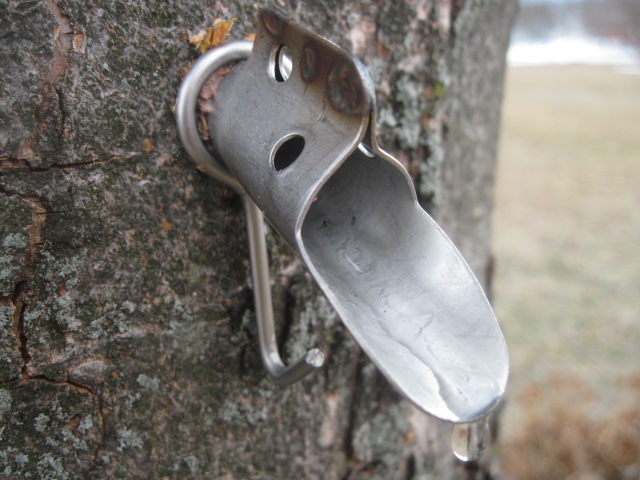 You'll then need something to collect the sap in. Traditionally, buckets are hung from the spile with a covering to keep out debris. Some attach tubing to the spile running to a jug sitting on the ground. I simply used thick plastic gallon jugs that I secured around the tree and jug with bungee cords. Collect the sap each day by emptying the buckets or jugs into a larger container. I used a canning pot and a large plastic storage container. Store the collected sap in a cool area not reaching above 45 degrees or the sap can spoil. 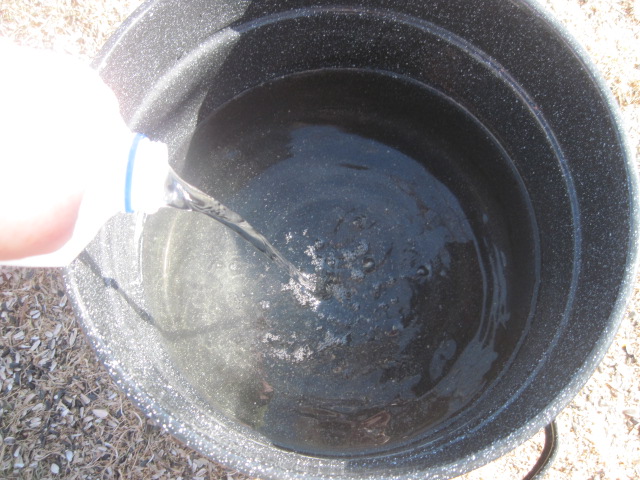 The two red maple trees I tapped have been each producing ½ to ¾ gallon of sap a day. We have had a bit of unseasonably warm weather, and there was one night where the temperature stayed above freezing, and the trees produced very little the next day. Otherwise the the daily amounts have been steady. In the first week I collected around 7-8 gallons of sap.

After collecting the sap, the next step is to boil the sap down into syrup. This is something that is best done outside, as the condensation can leave a sticky film all over your kitchen. This part is basically a large scale reduction--boiling off the water in the sap, leaving the sugary syrup. It can be a long process depending on how much sap you're working with. My first 7-8 gallons took around 8 hours to boil down.

Traditionally, the sap boiling is done in a large couldron over a wood fire, but you can also use a propane burner or a gas grill. I used the gas grill primarily, with a propane camp stove cooking a smaller amont on the side.

The more surface space that is available during the evaporation process, the faster it will go. Flat pans work best. I used a steam table pan which fit nicely down into the gas grill after removing the grills, and the canning pot on the camping stove. 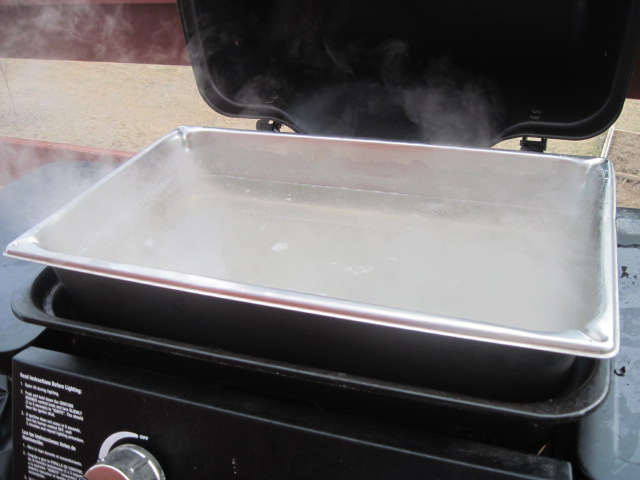 Fill the pan up about an inch from the top, and slowly add in more sap as it boils down. I added heated sap from the camp stove which seemed to help speed up the process. 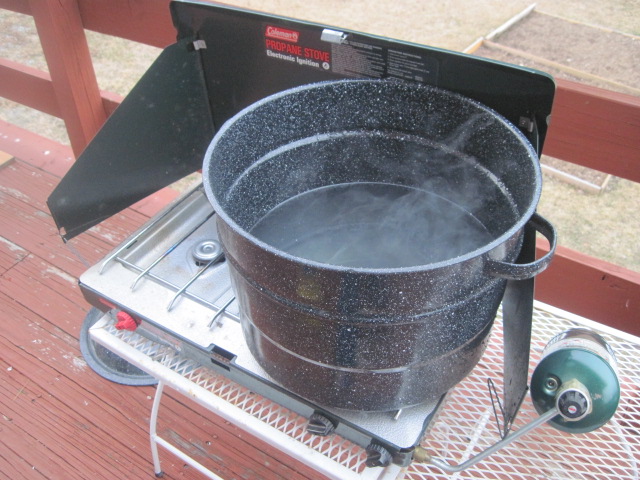 As it boils down, the sap will slowly turn a tan color. The syrup is ready when it thickens, turns brown, and boils at 104 degrees celcius or 219 degrees farenheight. It will also have a slight caramelized smell just before its ready. Keep a very close eye on the syrup during the last phase of this process as it can easily burn and ruin the entire batch.  I brought the pan inside and boiled on the stove with the overhead fan on high for the last 45 minutes in order to more closely monitor it.

When the syrup is finished, filter through something like thick cheesecloth or wool while still hot to remove debris and crystallized “sugar dirt.” I used a piece of old clean flannel wrapped over a funnel and poured the hot syrup directly into the bottles which worked fine. 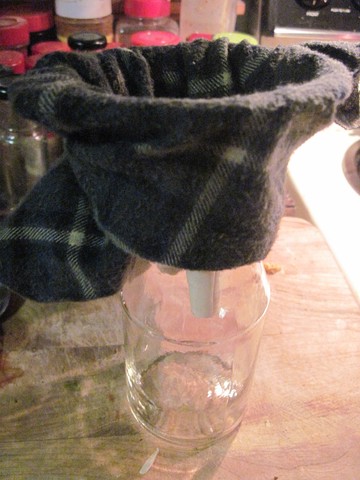 Let the syrup cool after it's bottled. Due to the sugar content, maple syrup does not need to be water canned.

The flavor of the finished syrup is exquisite--rich, mapley, and not overly sweet.  Enjoy!

I've been collecting so much sap that it was definitely time to boil down another batch.  With the first batch, I used the combination of a propane grill and propane camp stove, but this time I decided to try a wood fire.  Cooking down syrup is very energy-intensive, and I went through a lot of propane in the 8 hours that I boiled it down last time.

Over the winter, there were quite a few large limbs that had come down along the treeline, so last week I collected it all, cutting up the larger pieces with a chainsaw.  My uncle had also cut up a decent sized tree for me last fall, so I had that to use as well.

I constructed a cooking set-up around my campfire pit out of cinder blocks, placed the grill from an old camp stove on the blocks, and sat the evaporation pan on this. 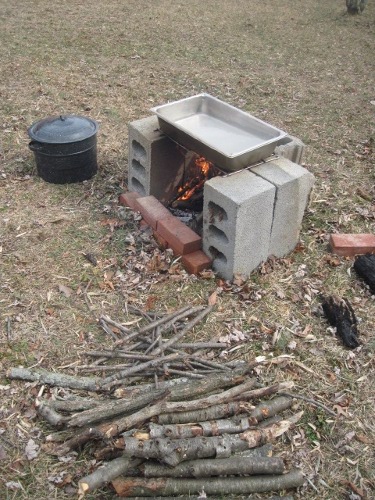 It took an hour or two to get the fire going hot enough to really start cooking the sap.  After that, it was just a matter of tending to the fire and adding more sap to the pan as it boiled down.  I went through quite a bit of wood, and all of this went well into the night. 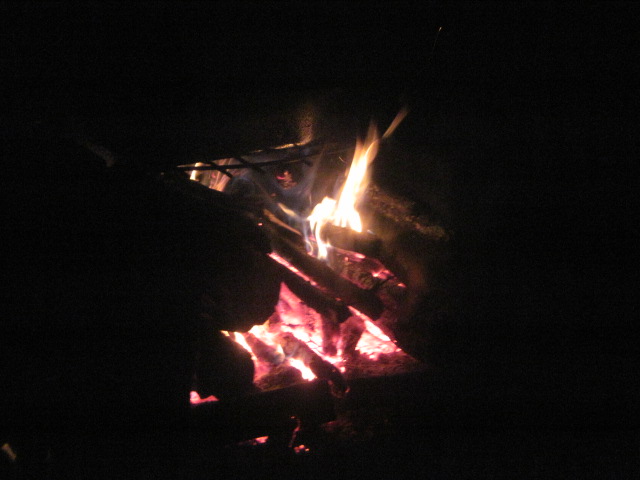 It took me 9 hours to boil down around 10 gallons of sap.  Using a wood fire requires much more attention and work than cooking on a grill or burner, but there is also something relaxing about spending so much time outside nursing a fire.

After finishing, my vision was a little screwy from so much time with so much smoke, but I ended up with a full quart of maple syrup.  The flavor is wonderful, with nicely complimentary smoky tones, and the color is a darker amber than my batch on the grill. Comment by Cornelia on February 22, 2011 at 4:06pm
Fantastic skillshare, Christa - thank you! I'm wondering: I didn't think you could tap trees so early. We had the warm snap last week, too, but now it's freezing again (15 degrees). The sap runs when it's warmer, but is there any danger to the tree having an "open wound" now that it's freezing again?

Comment by Shannon Floyd on February 22, 2011 at 5:05pm
Thank you so much for sharing.  I've always wanted to make my own syrup.  I'm looking at my maple trees a little differently now :)

Comment by Christa Nelson on February 22, 2011 at 5:14pm
thanks Cornelia and Shannon :)       .....Cornelia, to try to answer your question (I'm by no means an expert on this).......but if you're wondering about the freezing issue, for the sap to flow it has to get above freezing during the day and below freezing at night, so if this doesn't hurt the tree then then i don't think it would be an issue if it stayed cold a bit (usually late winter/early spring fluctuates like that anyhow)......and also remember, i'm like 8 hours south of you down here in south central PA and while we got six inches of snow last night, my thermometer is saying that it's 41 degrees now (perfect for sap!)

Comment by Amy Sirk on February 22, 2011 at 8:27pm
Awesome! Thanks for all the helpful photos for us visual learners. I think I may be in the market for some maple trees in the near future.

Comment by Christa Nelson on March 5, 2011 at 3:59pm
hi y'all.....just in case anyone would be interested, i just added an addendum to this post about my experiences yesterday cooking down another batch of syrup, this time with a wood fire instead of a propane grill

Comment by Lauren Klouda on March 6, 2011 at 5:11pm
I was just saying today how I want REAL maple syrup! This is awesome. And I have several trees available because I didn't realize that you could tap other kinds of maple trees besides sugar. Thanks!

Movies and TV Shows: Our food, agriculture and music-related favorites

Farmers & Ranchers, You Are Climate Heroes. Tell Congress the 2023 Farm Bill Should Support You!

Farmers for Climate Action: A Rally for Resilience in March 2023