The wild bees and the honey men...

I received a message by way of my father, via the local grocery store, from the resident bee-keeper and honey man.  The message was that news had reached him, via a neighbour, that there was a nest of wild honey bees in an old tree on my property - which of course I already knew.  The bees have never bothered me and I have never bothered the bees, though I often wondered what the honey might taste like after they have fed abundantly on the flowering basil, rosemary and thyme that grow in my kitchen garden.

Having lost a good number of his own bees recent, possibly to Colony Collapse disorder, the bee-keeper was anxious to visit and make the acquaintance of "my bees", in the hope of coaxing some (?) of them to take up residence in one of his hives.  The message ended, "he will come after church on Sunday".  As the aforementioned bees are about 40ft up in an old tree, that stands over 60ft high, this sounded like a very interesting, and possibly entertaining Sunday adventure, and I hoped that he had prayed well at church that morning before arriving.

So Sunday came, as did the honey man and his assistant as promised, and the process began.  There was much inspecting of the tree and eventually it was deemed that this was indeed a very good colony and that there was evidence to suggest that a huge part of the tree was already filled with honeycomb and wild honey. So the smoker was lit with a handful of dried grass, and overalls donned.  No fancy bee-keepers' whites here - good old work overalls and a straw hat with some rather manful stitching that secured the net was all that was required. Up went the ladders, followed by the honey men, into the canopy, and all I could think of was Alfred, Lord Tennyson and "The Charge of the Light Brigade":

All in the valley of Death
Rode the six hundred:

'Forward, the Light Brigade!
Charge for the guns' he said:
Into the valley of Death
Rode the six hundred.

Onwards and upwards they went, puffing smoke and peering into the great abyss.  Bees began to hum and the area immediately around the honey men began to darken. There was shouts and exchanges of insults in French creole - "stand on there, you fool" - "no not there, stand here!" - "let me do it! - "stop being a coward" - "look out....." and then came an almighty crash as a rotten tree limb came crashing down, taking a section of the perimeter fence and my neighbour's banana tree with it and the bees burst forth.  Much waving of hands and "I told you so's" and down came the honey men. Thankfully, the bees did not swarm, but buzzed and patrolled their air space - like MIG fighters that had been dispatched to investigate intruders in a no-fly zone.

Eventually as the heated debate died down, I slowly emerged from my hiding place whence I had dove when the commotion begun.....thankfully, no one was hurt (apart from the possibility of a bruised ego for the senior honey man who was now being chastised by his assistant for pussy-footing around).

The honey men concluded that they needed the "big guns", and must return with a chain saw and better ladders or a platform.  In the meantime, all that could be done was to try to repair my fence and make the property secure.  As both have day jobs - the return match would have to wait until the weekend, and eventually it was decided that it should be the following Sunday.....after church.  I can see now why the trip to church is such a very integral part of the whole operation. 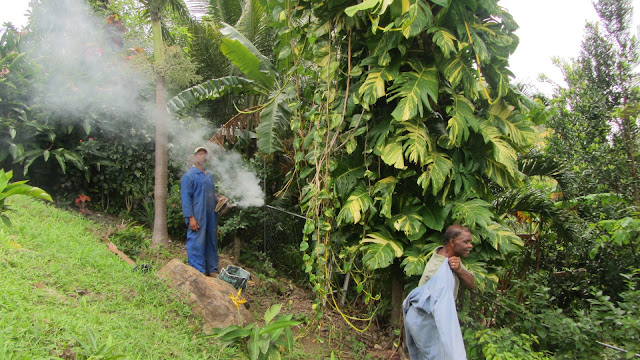 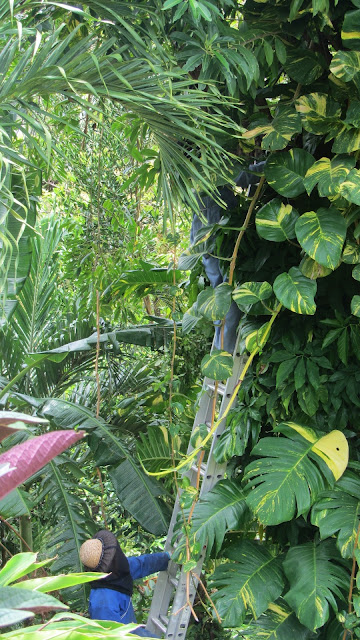 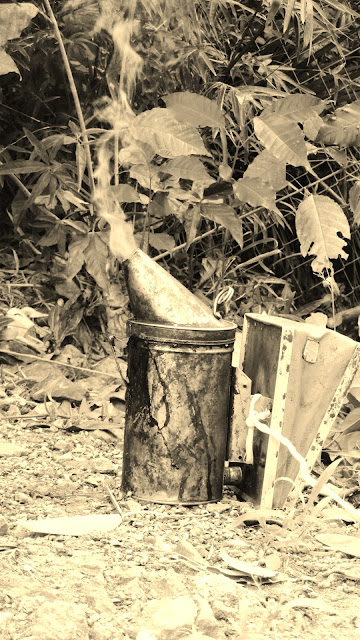