Use It Up: Bacon Grease

One of the great disappointments in life: frying up a huge package of bacon and ending up with a couple of bacon bits and a pan full of bacon grease. Don't despair! You can use that grease in place of oil in cooking to save money over buying oil, and to add that incredible bacon flavor to other foods.

I save bacon grease in a glass jar in the refrigerator so that it lasts a good amount of time (can't say exactly how long because I've never had any go bad). If you keep it on the counter, you should use it fairly quickly, just to be safe.

Note: I suggest using a wide-mouthed jar for storage so you don't spill hot grease all over. Not that I have any experience in that area. 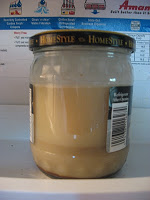 Here are some ways to use bacon grease. You'll be glad you did.

* Spread on bread in place of butter for grilled cheese sandwiches. Honestly the most decadent lunch ever.

* Fry greens and onions in it. This may be an effective way to get picky eaters to get their greens.

* Add to ham and bean soup or baked beans for a bit more oomph.

* Fry or scramble eggs in it.

* Use in place of lard in homemade refried beans.

* Make fried potatoes or the most awesome french fries ever.

* Rub on the outside of potatoes before baking.

* Use to grease pan for making a savory corn bread.

* Make white gravy and eggs (brown a couple tablespoons of flour in a heaping tablespoon of bacon grease, then add milk and small amount of additional flour, whisk and cook until it starts to thicken. Add chopped eggs and serve over sourdough toast. A family favorite!)

* Use to season steamed or boiled veggies.

* Pan fry squash, onions or other veggies in it.

* Make a candle. Yes, you read that right. Ehow has a great article oh it.

* Rub under the skin of a whole chicken or turkey to roast.

* Caramelize onions to use on everything.

* Use to pop popcorn on the stovetop.

* Use for cooking hot dogs.

* Use to grease a pizza pan to make a homemade pizza a more decadent affair.

* Use as a warm salad dressing with a bit of vinegar.

* Use to season cast iron.

* Add to mashed potatoes in place of butter.

* Use to grease a panini press.

* Add to dog's food. Just be reasonable about the amount.

* Add to hearty soups such as potato soup. It is also great to add a bit more flavor to veggie soups.

* Use in place of butter in mac n cheese.

* Render it into lard to use in pie crust or other recipes using lard.

* My friend found an old cookbook that called for bacon grease in a cake. She said it turned out well, but interesting. :) I've also heard of people using it in cookies. 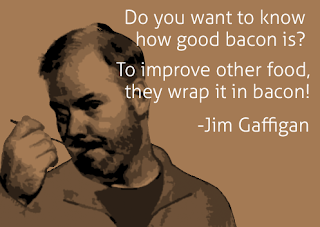 Cynthia! So nice to see you around! I was trying to pick out one or two of my favorites from your list of recommended uses above—and then I gave up. They're all good! And such a great reminder of what a gem (liquid gold!) bacon grease is for meat eaters. Thanks for sharing!